What is the relationship between hue, saturation and value?

I see people adding color on top of a gray-scale drawing and their colors look great, but when I do myself, the colors look terrible (dirty, not the color I seem to pick from the color wheel). People tell me I need to learn about tone and value and the color wheel. I've gathered from this site and others that tone is really hue, which is really what we call color. But I'm not sure how saturation and value work into this.

What is the relationship between hue, saturation, and value and how does this factor in to coloring a gray-scale picture?

And even a good explanation of the color wheel would probably help. Thanks.

Value is essentially the darkness of the pigment. Less value equates to a darker color. If you take a color and remove all hue, you are left with value - basically greyscale. Brightness is another term used for value. Often brightness is a bit easier to remember since more value means a "brighter" color.

Saturation is essentially the depth of the pigment. More saturation means more pigment. Less saturation equates to a tint or lighter shade of the color. Luminosity is another term used for Saturation.

Basic saturation scale. (based on a red hue)

Hue is the base pigment.

"Color" would actually be the combination of all three of the above.

For example if you have a Hue which is red.

Anther way to think of the relationship is to consider removing Saturation as adding white to the hue. And removing Value as adding black to the hue.

If you are coloring a greyscale image, you would use the greyscale to designate the value of the colors. To that end you would never adjust the value of the color you are using allowing the underlying greyscale tones to create darkness. You would choose a hue and a saturation, then paint over an greyscale area, setting the blending mode to Multiply or Darken to allow what you are painting to interact with the underlying image. Because you are using a base greyscale image, you would never want to create an area which is lighter than the image. The only variation would be how much color is applied, thus hue for the pigment value and saturation for the amount of pigment.

Hue: what color is it? Saturation: how much is it? Value: How dark or white is it?

Hue: the wavelength of the color (at what angle does it fall on the wheel)

Saturation: describes how pure/intense/strong the hue is.

I liked the answer by @Scott. If I understood his answer well, then I try to explain Hue, Value, and Saturation based on physics.

I think the Hue corresponds to the wavelength of light. This is a property of light and not the object that light is illuminating.

Then the Value corresponds to how much the light is absorbed by the object it is shining on. If an object absorbs all the light shinning on it, for example a red light, then that object looks dark and if it does not absorb at all the object looks red (if we use a red light of course). This is the property of the object's surface and does not depend on the light source.

Here is the color picker from Photoshop and the axes that I think corresponds to the absorption and scattering. 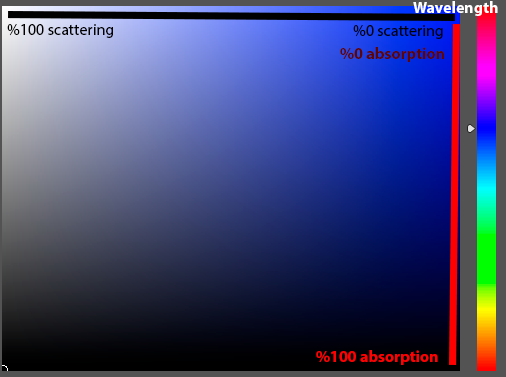 There is a real confusion with saturation vs value or brightness. Tints and shades change both saturation and brightness. fully saturated color has a variety of value from yellow to blue- light to dark

2
Darker shade of a given color

14
How to calculate other colors with the same perceived lightness as a given gray value?
10
What is HSB really?
10
Color Theory: Is there a measurement of "colorfulness"?
0
Photoshop Hue Change Color
4
How to pick and differentiate a flat color?
1
Is the low statistical correlation between the HSV channels, conditional upon the color name, a well known property of the color space?
26
How can I detect if a color is gray