Is it good practice to add additional space before a punctuation mark after emphazised text?

Is there a typographic convention or practice about placing punctuation marks after emphazised text?

I ran across this example on a website today that adds an additional space after emphazised text when the next glyph is a punctuation mark. (However, there is no extra space if the next glyph is the next word's beginning.) 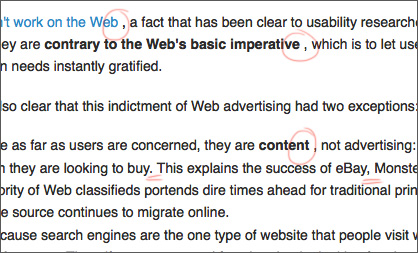 The red circled spots are what I am refering to, in contrast to normal punctiation marks, which are underlined red.

I basically understand this choice, so what I am really looking for would be citations or references to a style guide that outlines this practice. Explanations as to why or why not this is or should be done are welcome also, just to see what is people's take on this.

No, no, no, absolutely not, no, hell to the no, no way, and if I were working on this document in any capacity I would be looking for my Hammer of NO to hit the originator with. Did mention "no"?

There is no reason, rule, suggestion, guide, stricture, or recommendation to put a space before a mark of punctuation. What I see there is someone who either doesn't understand how typesetting works, or someone who coded the HTML by hand and didn't preview to see how it looked.

Your first instinct to "dismiss this as plain wrong" was right on target.

(I am also an editor and proofreader, so this makes me scream from two directions.)

To answer the implied question "Why would a respected source of usability advice do something convention-breaking like that?", the answer is in the source code.

It's not something a human did by adding spaces, it's something their site's CMS does indiscriminately to every inline element on the page (not just links and bolding / italics), because of the way it formats its code.

If you know HTML, this gives it away (if you don't, there's a plain English explanation below):

If you don't know HTML and that means nothing to you:

So, it's their CMS indiscriminately adding spaces to every inline HTML element, not an unconventional editor purposefully targeting links and emphasis.

Also, there are <p>&nbsp;</p> dummy paragraphs. This is a really clumsy way of increasing the spacing between two paragraphs - literally the equivalent of hitting 'Return' twice (and might actually be the result of someone doing just that in a wysiwyg editor). It's unsemantic and offers no control at all on how wide such spaces will be - any attempt to widen or narrow these breaks will widen or narrow every paragraph.

It jumps out as a hallmark of an organisation where there's something of a lack of control of their web publishing, or an organisational disconnect between the needs of the writers and editors, and the features and styles created by the designers and developers.

Normally, you'd expect them to use something like <hr class="wide-break" /> which is semantic, follows web standards as the correct way to "transition to another topic within a section", and allows complete control as to how wide this type of space will be.

No, it's not correct to put space before comma or other punctuation marks in English texts:

So what you see on that website is incorrect. As far as I'm aware though sometimes in other languages (French???) it is allowed to put a short space before comma. But I don't know what's the rule behind it. I'm sure it's not correct in English though.

IMHO there is one exception when it's acceptable: after a web or mail address. If you cannot avoid having punctuation there, better put a short space there. These addresses often are strange and can end in a dot or a comma; this way you avoid confusion. In a printed text, you should of course use a different font face with different size of dot or comma, which is sufficient. But you cannot do this everywhere. (I prefer good and consistent typography in general, yet I think that one has to remember that typography is here to make documents better, and if it's better for the legibility to add a space there, you add it.)

12
Footnote/Endnote references before or after punctuation? (comma, full stop/period, semi-colon...)
8
Double space acceptable after period before abbreviated title?
0
how to add words to a text after expanding it in illustrator?
1
Is there a good add-on for RTL text support in Photoshop?
5
Typographers' "canon of exemplars": What are some books that typographers think are examples of great typography?