How do I drain this pattern of color to add it?

I'd like to add the below leather pattern effect to the bookmark I have made below that: 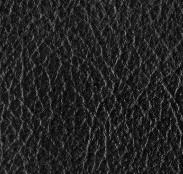 The bookmark is simply white pixels with some layer effects added. How do I "drain" the texture of colour so that I can define it as a pattern and add it as a pattern overlay? Currently it "blackens" everything when I do so, and reducing its opacity has the simultaneous effect of reducing the texture effect...

Also, in cases like this, should one change the scale of the image before defining the pattern, or simply do so when adding as a patttern overlay?

Thank you all for the detailed answers - they're all great. I still must be doing something wrong, however, as I keep getting the following result only (with a Pattern Overlay... Normal Blend Mode, but lighter ones do not produce any noticeable result):

To be clear this is pixel data, not a vector image. I'm not really sure what's going wrong? Having said that, I just converted it to a smart object and the pattern overly began applying fine. Since the image is already rasterized, what's the change that I need to make in order to allow the pattern overlay to display correctly

Rather than using Screen blend mode I recommend making the average color in the texture 50% gray, and using Overlay, Soft Light, etc., which will allow the texture to both lighten and darken rather than merely one or the other, as with Screen or Multiply.

To do this you can use the Other > High Pass filter. A larger radius setting will preserve larger features, but all will cause the "background" of the texture to be 50% gray.

Here is your texture after a 250px high pass: 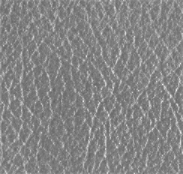 Here it is in Overlay mode on top of the bookmark:

Once you've overlaid the texture as a pattern change the blend mode on the pattern overlay window – screen will make all black become transparent and white remain visible which I think is what you're asking for. You may want to try some other blend modes such as lighten or overlay which can also be useful.

In terms of scaling the pattern I'd try it with the pattern overlay window as this leaves more flexibility. If it looks like a poor repeat around the edge you may need to go back to your original texture and and resize/refine it

Try using the Screen blend mode. Here's what I got by combining your two images using it (after scaling the texture down by 50%, since your bookmark is kind of small compared to the texture):

(I did this in the GIMP, since I don't have Photoshop, but the Screen mode should work the same way in both.)

The result is a little lighter than your original bookmark, which is only to be expected since Screen is a lightening mode. You can tune the lightness of the result by adjusting the color levels of the texture layer and/or of the background.

Not the answer you're looking for? Browse other questions tagged adobe-photoshop texture patterns or ask your own question.

2
How do I create a worn/distressed effect in Photoshop?
3
How do I add a raster texture file to Illustrator's 3D Extrude & Bevel?
4
Copy the result of an effect on one layer to a new layer
1
How to add to an existing shape layer?
0
Same pattern does not apply to duplicate layer in Photoshop
2
Easier or smarter method to apply a texture over multiple layered parts of an image
1
How did I break this effect? It was different just a minute ago
0
How to make designs to have realistic woven/knitted texture