What's a replacement for Univers Condensed?

I'm failing to find a replacement for Univers Condensed to use on the Web. I'm using Typekit (portfolio), and right now using LFT Etica Web which is much wider than Univers. I tried Googleing but no luck, so I decided to sign up and ask the pros.

I would consider the google-font "Oswald" It comes only in 3 weights and has no italic or oblique version, but reminds me of the Univers Condensed type. Try changing Oswald 1pt less than Univers, regular -> light and bold -> regular.. Last, change tracking to +50..

Roboto Condensed is a close alternative, and available on Google web fonts 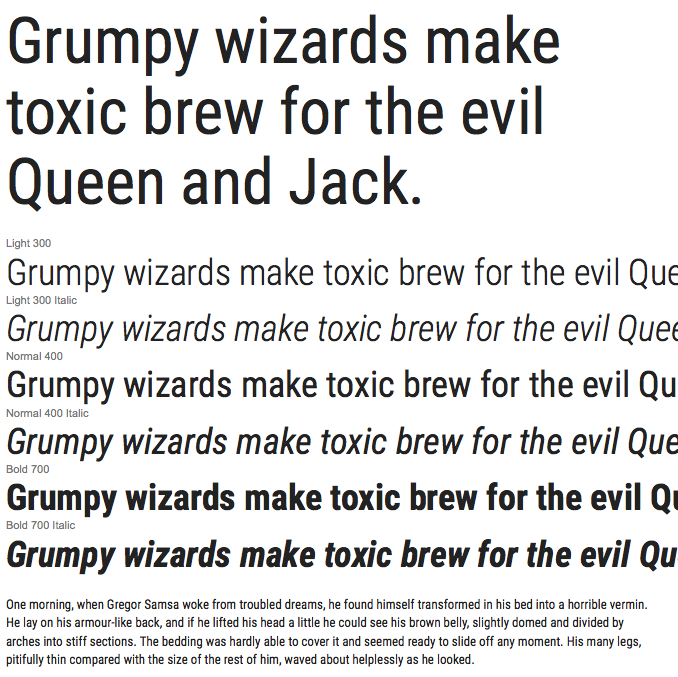 The great thing about Univers is that it comes in so many weights and widths. It's a real powerhouse of a typeface.

Very few typefaces come with the range of fonts that Univers does. So there's really no universal 'alternative'.

Now, if you are only using one particular weight of Univers, we could maybe find a font with similar metrics.

All that said, you don't need an alternative. You can license Univers as a web font:

Font foundry URW created a 'clone' of the Univers and Univers Condensed design and donated them to the Ghostscript / GhostPDL project as open-source software, under the Aladdin Free Public License.

If you don't need a look-alike recreation of Univers Condensed, you might consider these alternatives:

Open Sans, by Steve Matteson. It's considered more "humanist" than the geometrical form of Univers, but may serve a similar purpose for you. As of 2021, there is now a Condensed Regular (on Github, but not on Google Fonts yet).

By Omnibus-Type from Argentina, this font turns up the "square"-ness of Univers Condensed up to 11. It's especially interesting because there are many widths offered, including Semicondensed, Condensed and Extra-Condensed --- similar to the Univers superfamily.

Some other google font options could be:

Note that google fonts allows you to filter by width and weight.

I've been looking for the same answer without pay a cent, so I found this font in typekit trial: https://typekit.com/fonts/nimbus-sans-condensed

Nimbus Sans is as good as a font not named Univers gets. Similar number of font weights, as well.

Not the answer you're looking for? Browse other questions tagged font-recommendation web-fonts sans-serif or ask your own question.

9
Noteworthy: Web Font and Its (Possible) Alternatives
7
Alternative to font "x" chart or service?
2
Need some font suggestions, please
22
A good monospace, condensed and open-source typeface?
2
Web-safe alternative to Univers?
2
Fonts similar to Ubuntu Condensed?
0
Does anyone know this geometric sans font used in the Photo Bulk app?
1
Is there any difference between a font converted for web and TypeKit
1
What Sans Serif font is this?