Ask Question
Asked 7 years, 9 months ago
Active 7 years, 8 months ago
Viewed 2k times
3
This question already has answers here:
How to make a logo where a letter is made of particles of varying sizes? (3 answers)
Closed 7 years ago.

Is there a name for this effect and what would be the best way to achieve it in Photoshop or Illustrator in terms of filling a different vector shape with a similar distribution of rainbow circles? 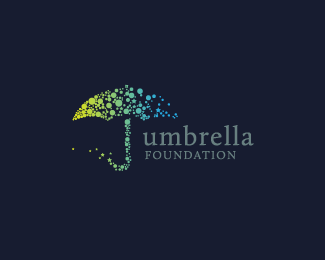 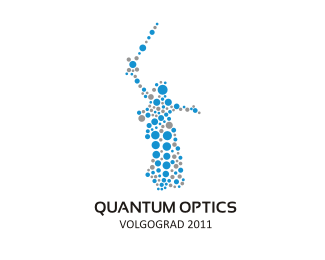 I did something like this long ago, but it was painstakingly slow by hand and I'm sure there's a better way.

To some degree this can be accomplished via scripting and Illustrator. Check THIS THREAD at Adobe.com. NOTE; it seems the link in the thread to version 1.2 of the script is broken. However the link to version 1.1 earlier in the thread still seems to work.

User Jongware has written a script for Illustrator which fills shapes with various sized circles. Adding the gradients afterward is a simple matter.

This may save a bit of time over a hand placed method.

That kind of effect is sometimes described as 'particles'. Effects like it on a large scale are often created using particle generators in rendering software like those in Adobe After Effects, 3D software or in HTML5.

In a logo, however, it's more likely to be done by hand in regular design software, for fine control - but the term is sometimes still used because the final effects are often similar.

Here's a fun interactive particle version of the Google logo from Google Labs nicely demonstrating the overlap between hand-controlled design and live, software-driven dynamic particles. Each particle / blob / dot / circle's position has been carefully set by some designer, and they've also been programmed to have particular behaviours based on what the mouse pointer is doing. 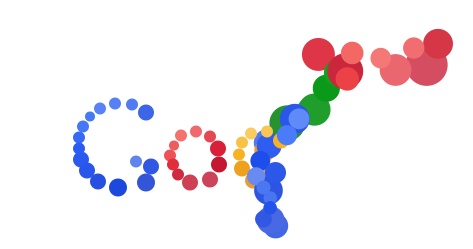 And I can't imagine there's a better way than by hand--at least for the level of detail you're going for.

Not the answer you're looking for? Browse other questions tagged adobe-photoshop adobe-illustrator logo or ask your own question.

25
How to make a logo where a letter is made of particles of varying sizes?
9
How do I fill a shape with many small icons in Photoshop?

0
Help with identifying how this mobile game art was created
1
How would you create these Photoshop clipping masks in Fireworks?
3
CS6 When holding shift to maintain perfect form, shape won't subtract from?
0
Glossy See through web graphic
6
Best way to create a shadow (depth) effect in Illustrator?
2
How do I curve a vector line in Fireworks?
2
Best way to re-create or draw swirl / spiral shapes
0
how to make inner shadows on objects?
3
How do I create a circle graphic pattern in Illustrator?
2
Creating a pattern of irregular shapes in Illustrator like the default WhatsApp background