What design and art concepts were art students/professionals discussing in the 70s?

I'm wondering: If you were [conditional, I'm not asking for people who were actually there] an art (or printing, or advertisement, I'm not sure what the title would have been back then) student or professional in the 70s, what would you be talking about with with your classmates/colleagues?

I don't mean what would you be studying at class, but what would you consider revolutionary (and maybe a little subversive) subjects at the time? What were the trends, the new ideas people were talking about?

Could be students from America or Europe. I'm actually thinking about latinamerican universities, but I realize that might be too specific. And they must have been talking about the same things, I guess.

I know, for example, that social science students were discussing Levi-Strauss, a lot. Which was forbidden in some latinamerican countries, because it was considered 'dangerous'. I imagine maybe art students were talking about... postmodernism? Feminism? I don't really know and would appreciate your help.

I am no expert, and I was not a student in the seventies, but I do remember some of the political upheavals, social and cultural currents and events.

Design is informed, develop in tandem with, or as a reaction against, politics and the happenings in society in general.

Yes, there was definitely a good deal of sixties hippy aesthetics around in the seventies; it had by that time become more accepted and more mainstream. The psychedelic elements not so "dangerous" and subversive anymore, the "peace and love" of civil disobedience and non-violent protest, with their organic flower-multicoloured aesthetics would "have to go": inevitable the political pendulum swings. 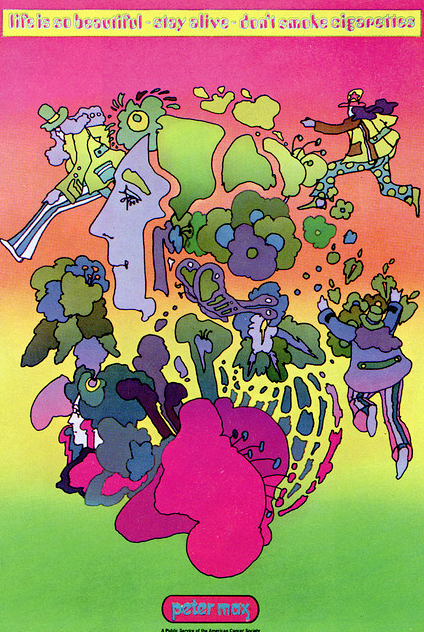 There was experimenting with printing techniques in the sixties, and you will find the madness of pouring several colours into the same colour well in offset printing presses. The eventual result is that the whole thing turns brownish, but you can print a good deal before the colours mix, and you will get a bunch of posters that are all slightly different. I.e.: there would be no raster. I can find no example, but imagine that you put several colour in this:

Edit: I found the picture I was looking for: 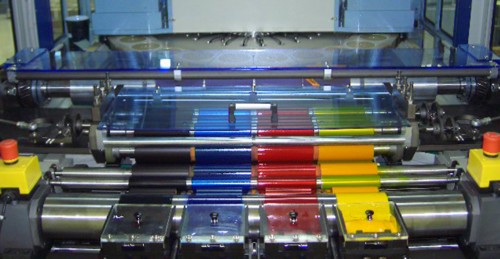 Sixties. Would you buy this lipstick? 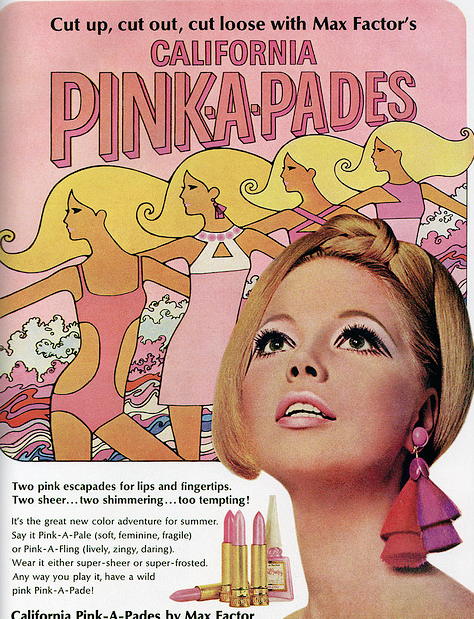 Though made in 1967, Milton Glasers Bob Dylan album design shows a tight visual language. My point is that the "hippy-like" hair is not in wild hippy colours. They are muted. The font and silhouette speaks of a minimalist contrast. 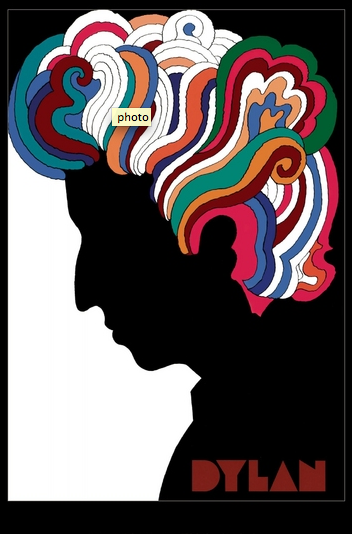 There is a large difference between what you might call corporate design and undercurrents rooted in some kind of bottom-up visual languages. If you search for "1970 design" you will get a lot of - what was seen by many as - high-brow visual effects, designs for companies and new, wonderful technology. There are still a good deal of colours but not much of the organic flowery-thing. It is moving towards more simple, graphic elements. Compare business design with LP covers, concert posters, "grassroot" cultural events etc., there is a large gap.

Seventies. Would you buy this? 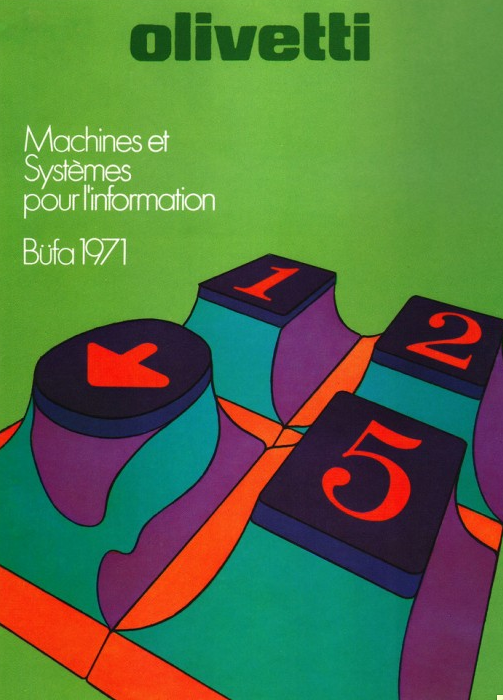 And of course, there is the controversial art of Andy Warhol, who "shamelessly" commercialised art. I guess you could call him the master of flat design :D. 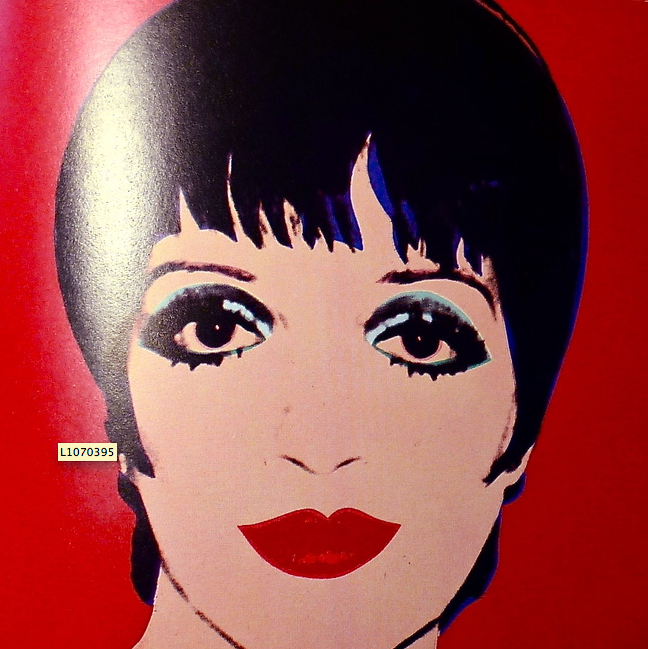 The 1968 social unrest and conflict was a violent reaction to what was seen as military, capitalist, and bureaucratic elites. Many governments answered with an escalation of political repression and physical violence. Peaceful protest did not go anywhere. Man in the street, anti-establishment. Cold war, real war, revolutions, the fall of the British empire, Mao died. The world was big, cold, dangerous and confusing. Robots, science fiction, space exploration, star wars, dystopias, genetic manipulation; the world was becoming alien. The hope that the world could be better than it was, faltered.

Anyone could create anything. Anyone could create music. The technology then was making it easier for more people to dabble in art, music, design. The classic example of this is of course Sex Pistols. It was messy, it was do-it-yourself, it was loud (in all senses of the word). They took revered symbols and dissected them: the queen, the flag, religion, politicians. The grid was truly out the window, rules and consistency were for sissies. If you were tone-deaf, that would be a plus as a singer. The Clash was criticised as being too "melodic", not "genuine" punk. Upper class. 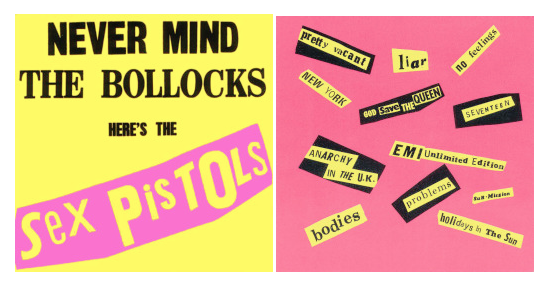 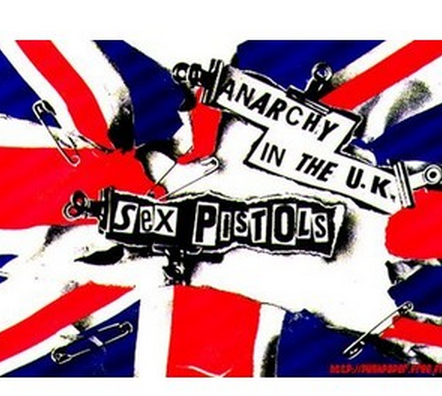 And here a play on Andy Warhols portrait of Marilyn Monroe: 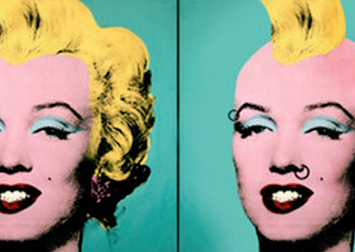 The feminism movement in the 70ties took elements from punk; it was the visual language of protest. It was focused around the female body, the right to sexual freedom, equal pay and solidarity with women all around the globe.

Solidarity with Vietnamese women during the Vietnam war: 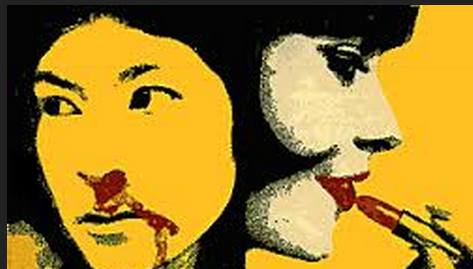 Being a student in the 1970ties, I would think there would be a pretty large gap and trench-war between the punk and "good taste." The post-modernist (term I despise) and analytical deconstruction clashed with "street" aesthetics. Other elements would be the "machine" aesthetics, the graphic art and music from David Bowie and Pink Floyd would be examples. Guess you could call it machine surrealism (as opposed to hippy organic surrealism), human-machine and the reinvention of our identity to what we are and what we create (i.e. technology).

It is worth noting that the punk movement was of course opposed to commercialism. As those that are part of punk grow older and we can sell them things, "their" language gets taken up by more mainstream commercialism, albeit in a milder version. Which is the case in many instances.

Not sure if I actually answered your question, but it was an attempt to put it into a historical context.

(next up would be the eighties and the crazy economic boom. But enough now.)

Of course the matters discussed, were highly subjective, and will considerably differ from countries having so divergent political backgrounds as it were back in the 70ies.

Let me share my rememberance of graphic design concepts I thought were cool in Germany then, when I was a teenager. I am aware of this inevitably being a rather inclomete, narrow, and personal view.

Most of the designs were heavily influenced by the aftermath of the 60ies flower-power hippie movement. But their concepts became more consolidated, and commercialized. Drugs and their influence on mental state resulted in "Psychedelia" which was transferred to almost everywhere like movies, commercials, and music.

This was also reflected in the graphical artworks for vinyl record covers which often had a theme of a phantastic surreal world: 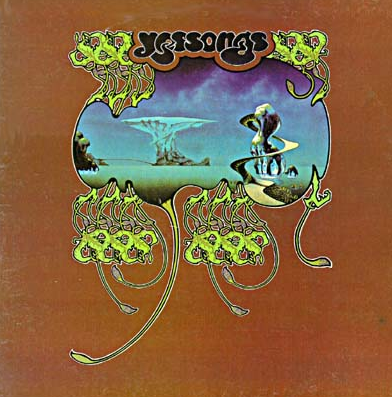 There was much influence to this from surrealism, mainly the works of Salvador Dali or Yves Tanguy.

Overall rounded organic structures and floral ornaments replaced the minimalistic Bauhaus style, at least in those areas claiming to be young and hip. Fonts like Banana Split could be found everywhere.

Stationery often was heavily ornamented, including the writing paper and the envelopes.

Major Seventies designers such as Lugi Colani adapted these organicness to almost everything:

The minimalism of the Bauhaus, clear geometric non-organic lines were still present in the 70ies. They survived until today, but by then they were considered as being "square".

Not the answer you're looking for? Browse other questions tagged history fine-arts or ask your own question.

11
What are the major design trends in graphic design history
5
What are great examples of the influence that design has?
21
What are the benefits of making gesture drawings?
13
How to study anatomy as an artist?
4
What were some the main trends/breakthroughs of web design?
21
What can be done to preserve the history of digital design?
14
What are the origins of terms "em" and "en" as typographic units?
5
What is the origin and the name of this style of the glyph "0"?