What's the name of the random geometric avatars some blogs use?

We usually see this kind of avatars in math forums! But I don't know what they are called.

What is the name of such art? 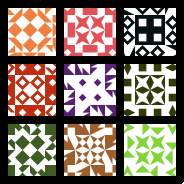 Also, is there any tool for generating these random shapes?

They're called Identicons, and they are typically generated based on a user's IP address.

They're popular around the Internet largely because they're a default option for avatars in WordPress: 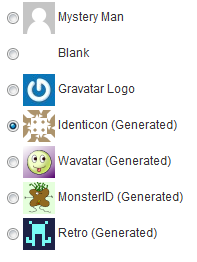 And of course, they're on Stack Exchange as well!

I did a quick search, and it seems like this site can generate Identicons. Not sure how copyright works and stuff or what else is out there.

Adding to Brendan's answer, I think you'll find this question in meta.so interesting. SO, for example, uses Gravatar and specifies Identicons as the default image.

An Identicon is a randomly generated assortment of shapes that is specific to a commenter’s email (or IP address). They were created by Don Parks, who said he originally came up with this idea to be used as an easy means of visually distinguishing multiple units of information, anything that can be reduced to bits.

It's not just IPs but also people, places, and things.

From Scott Sherrill's blog (who made a WP plugin for Identicons, based in the orignal creator Don Park's idea):

Identicons allow visual representations of commenters without requiring any external sites or user interactions. With 40 possible shapes (about 70 with inversions) in 3 possible positions, around 8000 distinguishable colors and four different rotations for each part, there should be several billion possible shape combinations which, even with the increasing chance of overlap with each additional user, should be quite enough for almost any blog.

These are the shapes with the inversions and positions:

You can download the sample for .NET from this Jeff Atwood's article in Code Horror.

Identicons aren't just for show. They're quite practical. Rather than printing everyone's IP address next to their comment, you can show their anonymized Identicon. It's more private, it's almost as useful, and it's much more fun.

Not the answer you're looking for? Browse other questions tagged shapes or ask your own question.

16
How to make plot marker sizes for scientific plots seem consistent?
0
How is this kind of digital drawing named?
0
Uniting two objects in Illustrator
1
Creating strokes in Illustator
15
What is the name of a squircle with three, five, six or more corners?
3
Edge line between partially transparent shapes in Illustrator
1
Extremely precise geometry in AI (irrational numbers?)
1
What happened to Adobe Illustrator's Crystallize Warp effect?