How to use the color picker along the gradient tool in illustrator?

How can I color picker for the gradient tool to sample a color? It seems the color picker does not work like photoshop does where you can pick a color from the existing canvas, but have to know either the exact hex ect? Example here, is I am trying to pick a color for the gradient tool, the picker does not show up when I hover my cursor over the canvas so I cannot select a color. Is there any way to sample outside the color picker tool? 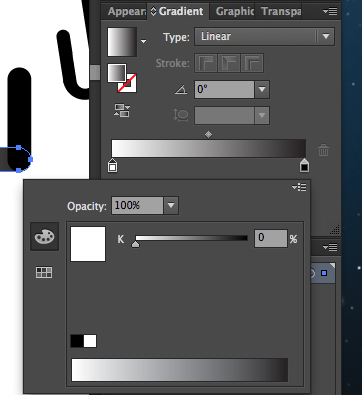 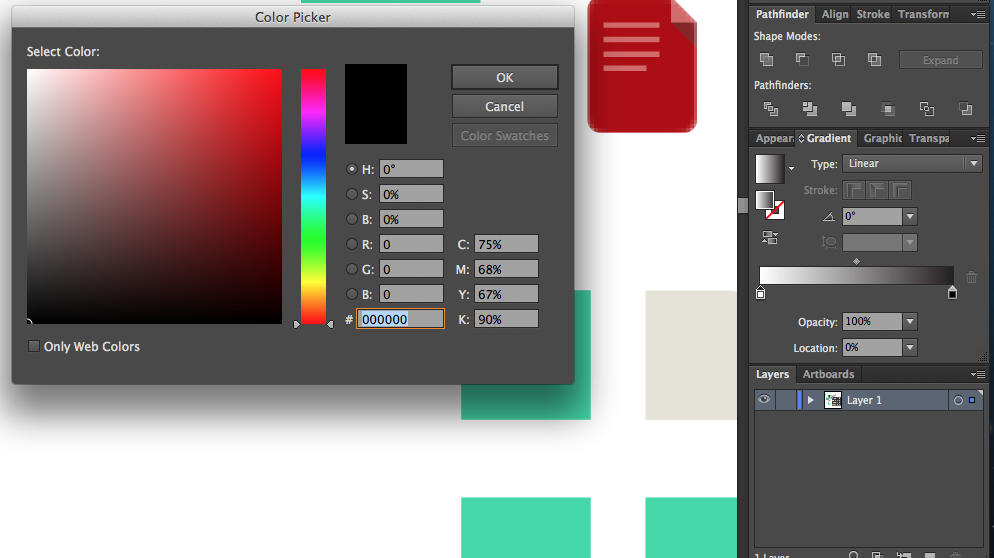 If I understand properly, you wanted to use the color picker for color stops of Gradient Tool.

I place here a solution because it looks very useful and not straightforward considering many questions in Google (and my 10 minutes self-updating research).

If you must, you can use the eye-dropper tool to load a color in the color well.

It's better to get in the habit of using swatches. Then you know you have right values throughout. For gradients you simply drag a swatch onto the swatch tab on the gradient slider.

Illustrator has a big leg up on Photoshop with global colors. If you check this option, you can change the color throughout your document by simply editing the swatch.

The color picker in Illustrator has a vastly different function than the color picker in Photoshop. It ultimately comes down to the differences in what you're doing. In Illustrator your basic primitive is a drawing object, in Photoshop it's a pixel. If you develop pixels it's natural to be able to pick up pixel properties which are naturally limited to one color and maybe alpha. If you develop objects it's not so clear.

You could take the stance that you in fact want to pick object properties, this is what both Illustrator and InDesign assume. But in reality you'd want to be able to pick both object color, visible pixel color and anything in between. But the short reason why you can not do this is that Illustrator does not really have a color picker at all, it has an appearance picker, but since this is the closest equivalent it's called the same. But since it's not exactly a congruent idea it's not behaving similarly in all cases. For example you can use Illustrators color picker to pick a gradient since an object's color might be a gradient or a texture. Therefore it can't be used as such to pick just a color.

This is to say that there's no reason why the gradient context couldn't pick colors but then the dialog is not modal, and a new picker code would need to be devised just for this context. So if you're willing to sacrifice functionality for design fragmentation and upkeep cost fine... But Adobe hasn't really wanted to do this.

Don't expect two different things to be the same.

I was wondering the same thing, which is why I landed here. Then I noticed that the color # is highlighted in the box, so I tried copy/paste and found that it works. Copy color # in the picker from one object, then choose the desired object and double-click its fill-color box and then paste the # into the blue-highlighted color # box.

This is a simple way to get a color from a sample object/image in just a few steps.

Not the answer you're looking for? Browse other questions tagged adobe-illustrator color gradient or ask your own question.

9
How can I edit the colors in an already-placed, custom gradient in Photoshop?
2
Gradient tool on smart object
0
Can you use the Blob brush in illustrator to add to an existing "blob" with a gradient color?
5
How to determine the color and opacity using the color picker tool?
0
Sample and paste a color from one object with a gradient to another object with a gradient
3
How do I apply a color gradient to a stroke?
1
Switching to the Existing Path When Drawing the New One Over It by Curvature tool in Illustrator
2
Struggling with the eyedropper tool in illustrator sampling colors?
0
Why gradient color pick tool behaves strangely many times?