Of course I've seen Create and Edit Parallel Paths in Inkscape - Graphic Design Stack Exchange, but the "Stroke to Path" answer there doesn't cut it for me - because I want to draw "parallel lines" as "bus connections" in technical diagrams, like this poor fellow:

I would like to have a sort of "hatched" parallel line brush (useful for representing busses in diagrams). This is what I could get to: * Draw three parallel lines [...]

Can you show a sample image of what you want? Your description is somewhat confusing. 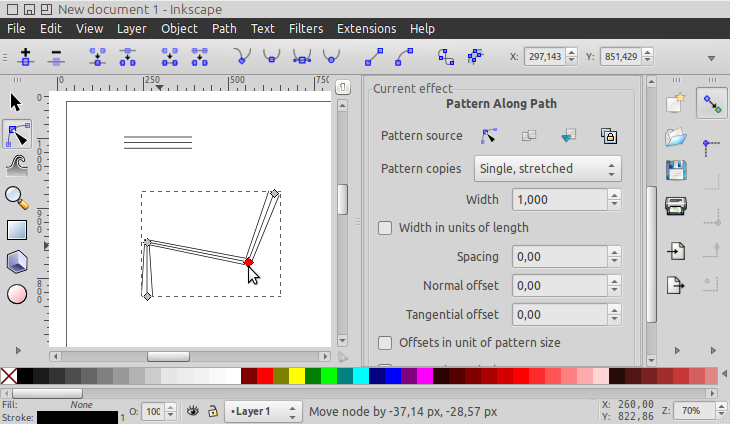 I basically want a single path (stroke), which is "styled" with parallel lines (strokes), and which still allows for editing through the nodes; as it can be seen on the image, I'm almost there - except the "styling" lines are not parallel, as there is a distortion (widening towards the ends of the master path). This distortion is a known issue, apparently:

Both Pattern Along Path, and its LPE version, skew the objects/paths after aligning them to each node. While this is desirable in maintaining continuity when applying a single shape to a curve, it results in distorting repeated objects at corners.

OK, here is a step by step of what I've tried so far (for full size of the images, copy their imgur link, open it in another tab, and then remove the last m from the filename, so e.g. wHTbjm.png becomes wHTbj.png):

Actually, since here the "parallel pattern" path is linked - you can edit that one too (with the pen tool), and the master line style will update accordingly; and I tried turning the parallel pattern lines into curves (so as to compensate for the distortion manually) - needless to say, that works very poorly...

Well - anyone know how to get proper parallel "bus" lines in Inkscape?

OK, here's one way (a bit tedious though) - thanks to Bug #493318 “Clone behavior is broken with style inheritance” : Bugs : Inkscape: 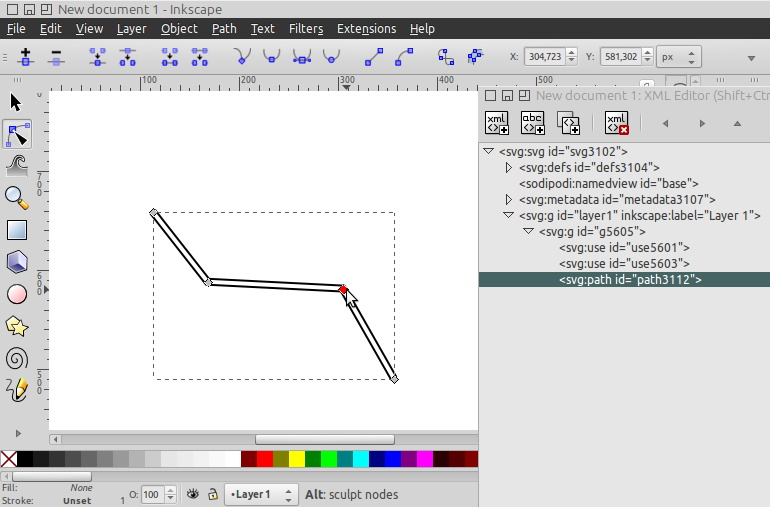 Unfortunately, it's a bit difficult to select the master line (given it's in a group), so one must use the XML editor to select it, before one can edit the nodes with the pen tool (easy enough for a simple example - but I can imagine, a bit tedious in a big document)...

Not the answer you're looking for? Browse other questions tagged inkscape diagram or ask your own question.