So a designer has given me some logos (for the web) which are white on a blue background. She has, however, added blue paths to the shape to make it match the background.

I would prefer to change these blue parts to be transparent.

I don't know enough about Illustrator to figure this out. I've tried clipping mask but that's not what I want. Would there be an easier way to just take the image into Photoshop when I'm saving it for the web, and remove the color then? I don't want to have any fringes of color left if I go with that method. 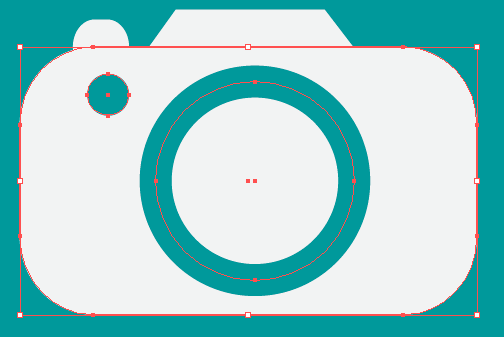 The above turns all strokes into shapes, then removes any overlapping objects. This will essentially give you a set of perfectly aligned blue and white shapes with appropriate "holes" in any areas where you would expect them, like the camera lens and viewport in your sample. Now, it's simply a matter of selecting the blue and deleting those shapes leaving holes in the white.

I'm sure if you explained to the designer you need correct shapes, they would adjust for you.

1
Illustrator CS6: How to cut an area (shape without fill) out of another?
0
Adobe Illustrator CC Transparent inside vector

2
In Illustrator CS6, how do I make my path transparent, but have solid color in the middle?
3
How can I create SVG clipping masks?
3
Save a vector shape with transparency with a clean outline in Photoshop?
5
GIMP: Background removal gives gray fringe, when exported as PDF
1
How to cut out a shape from another shape that has effects?
3
Should I export my logo with the padding?
1
Make color transparent and keep the same visual color
0
negative space creation inside illustrator
0
Is there a way to set a transparent color in Adobe Illustrator?
2
Don't understand why clipping mask isn't working