Creating a blow out effect to embed an image into another

I am trying to create a logo that incorporates the work of two other projects we have images from.

Basically, we take the image from the oldest project and want to create a blow out effect in the center with distortions that mimic the swelling and bursting to reveal the image of the second project inside. We'll be using something to the effect of a razor or laser to cause the bursting. 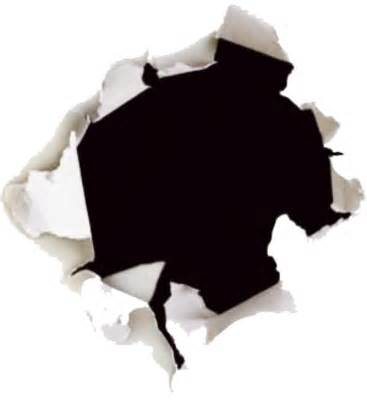 To reveal the logo of the second project in the middle like a superman revealing the S symbol underneath: 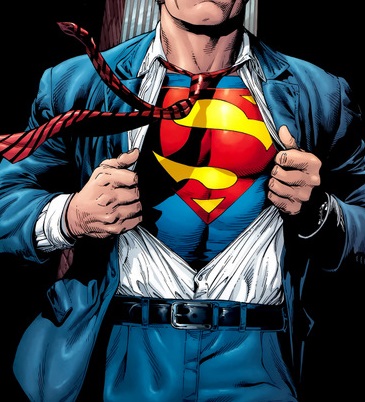 So it will look like the logo of the second project burst through the chest of the first project logo (since it was derived from it) and there will be sort of a laser or light saber effect that caused the rupture alluding to the current project as the revealer.

How can I manipulate the first image to make the new logo appear inside it?

I came across an image that better exemplifies the effect I am going for. It turned out to be a tattoo ironically that demonstrates the type of blowout/ripped edge effect that I want to show something coming through it. Maybe this will help provide some more specific suggestion on how to achieve my goal.

Simply put: your "thing bursting out" ("burster") is a layer below the "Thing being busted" ("busted").

If you imagine the superman "s" as a plain photo and the rest as a painting on glass with the chest area left unpainted, then when the glass is placed over the photo, you have a composite image with the "s" bursting through.

The busted item has an area within it defined by a mask ("layer mask"/"alpha mask"/"alpha channel"). The burster is a normal image.

When the alpha mask is enabled/supported by the rendering software (GIMP/Photoshop/web browser client), the under layer will show in the the area(s) where the mask is defined.

An alpha channel is either a 128-bit or 256-bit greyscale image stored alongside the RGB channels in the image. For a browser, PNG supports alpha and enjoys pretty decent support among browsers (but not complete support). Browsers can composite the two images on the fly using CSS etc, but that is beyond the scope of this stackexchange.

In a pre-rendered image (GIMP/PS), you can use layer masks to get it all the way you want and export to PNG in a way that embeds an alpha channel of the final look.

The advantage of the 2-image-on-the-fly compositing by the browser client is that you can swap out either image at will.

In you torn paper image, your alpha mask would be the fully black region. With GIMP or PS, place that image on a layer, select the black, add layer mask based upon selection. Place a red layer under it and enable the layer mask (if needed).

Not the answer you're looking for? Browse other questions tagged images photoshop-effects or ask your own question.

3
Why is my image turning gray when I paste another image on it?
2
How to embed an image into a Scribus document?
0
Creating a Large Image from a small one
0
Does the image in this scene look out of place? I can't seem to incorporate it into the scene
1
Any tool or tricks to convert the image colors into the colors of another image?
3
How would you create this "dissolved overlay" effect so that the text is one with image and vice versa?