Imaging tool to slice a scene into smaller images

I'm looking for a software tool to slice an image into smaller ones. It will be a part of a much bigger project so the effort to export the output should be minimal. It doesn't matter if the initial setup takes time but making a change into the scene and taking an export will be something that we would be doing regularly so it should be doable with minimal effort.

Here's an example of what I'm looking for in the tool.

Consider the following image as my scene: 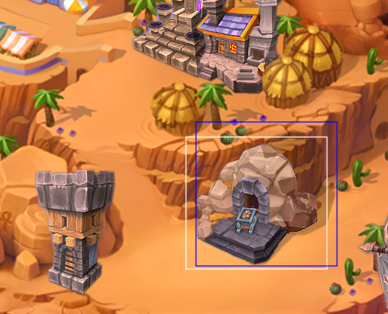 Which means that the background picture is invisible in the exported files. I have the gate and its shadow in separate layers so I can easily produce the desired output (as above) manually but I'm looking to a tool to do that for me automatically (as I might be exporting this a thousand times).

Perhaps I can set which layer is visible in each slice! I mean that would be great.

Does anyone know such a tool? Inside or outside of Photoshop?

If you convert each layer or layer group to a smart object, you can double-click and open them up as if they are their own auto-cropped psd file and save out your image from there.

With this in mind, try creating an action (or script) to: 1. convert current layer to smart object and open it. 2. save as png (or whatever) 3. return to original psd and undo x steps.

You could rasterize instead of undo, but this would flatten any layer groups.

Not sure if this is possible with actions, but it is something that is definitely achievable with scripting if you know javascript.

If you're working on a mac, Slicy from MacRabbit may be just what you're looking for. Basically you specify output files (png or jpg) by labeling layer folders in Photoshop. Once you set up your hierarchy exporting the slices is drag and drop. It's really simple but really powerful.

Not the answer you're looking for? Browse other questions tagged adobe-photoshop slices or ask your own question.

6
How to delete the first slice photoshop generated while using slice tool?
0
I need to slice one image into 50 different images automatically.
1
How to slice a huge image into smaller ones with 'Save for Web'
1
Exact slice size of slice tool
0
Photoshop Automation
0
Photoshop CC 2017 - Why is lasso tool cropping image when used in Select And Mask?
0
Photoshop - slice and save image - can't get save dialog. Has something changed?
2
Drop shadow in Photoshop based on image size
0
How do I change the order and number of slices in Photoshop?