Looking to duplicate vintage Batman font that was used for the pop up words?

For the words like kaboom, zappp, taka taka, pow.

A lot of the style has more to do with the colors and orientation of the letters rather than the typeface itself. For example, a (really) quick attempt to mimic the "Kapow" graphic:

This uses Franklin Gothic Demi, a pretty conservatively styled typeface. However, if you mix up the colors and orientation a bit, you get something close. Gill Sans Ultra Bold may already be on your computer, and using it with some of that variance could put you about on par with any humorous-themed movie poster.

As for the fonts themselves, you'll do well to pick anything that's tagged as "comic" or "cartoon". FontSquirrel has a bunch of these.

Or, you can try searching for fonts that mimic the hand-lettered look. That would probably get you the closest to what you'd see in the original 'Batman' TV series. When I think of hand lettering-style typography, I think of House Industries. They have a free download of "House Slant" available that could suit your needs very well (again, a rushed example): 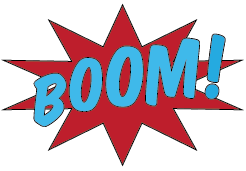