Is it copyright infringement by US copyright law if someone else modifies and uses my design?

My company is in a small town and there are not any graphic designers but we have enough business in the town and the surrounding area to support us. But because of the small town nature some business owners do not know all the laws. And since I am starting this from a career in architecture I am not quite clear on copyrights. So here is my problem.

I created a sign that has an oval with scrolls and flowers in different colors on a field of turquoise. The client did not want to spend the money on a logo design so I said that I will just retain the rights so that she would have to come to me for the approval to use the logo on anything else. So anyway everything seems to be fine, I do her business cards and now all of a sudden I see a sign at the street. I quoted her on this job figuring in using the logo. Apparently this company did for much less and you can tell by the quality.

But here is my problem. She had a jpeg that I allowed her to have so she could create her own fliers and I was ok with that since it would not have made me much if any money. Well I am looking at the sign that the other person did and all that was done is they made a longer oval since this sign is more rectangle and used a different font. And put this over the design that I did. To me this is copyright infringement since the client did not want to buy all the rights. But who do I address? The client or the person that did the sign?

Truth is, in the US, the artist retains all rights unless they are specifically given away. You can't even "accidentally" give rights away. There are only 10 reasons why an artist would lose the rights to things they create (Not counting a written agreement to give rights away). If you aren't an employee, then there are only 9. If it's not a motion picture, only 8. If it's not a test or related to a test, only 5.... 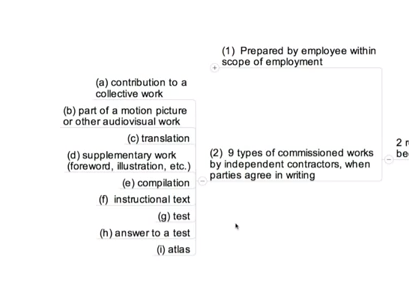 William Fisher has provided a quite lengthy series of lectures on YouTube regarding US copyright law.

While the question is design related, any direct answers would need to be legally based, so..... you need to speak with an attorney.

Did you have a contract that explicitly stated the agreement you had with the client? That would be ideal. But barring that, verbal agreements can still have some weight.

If you want to pursue this, you really need to get a lawyer involved. I'd suggest consulting a lawyer. They may consult you for free, or perhaps you may have to pay for an hour of their time. Only you can decide if it's worth that.

Simply put, any copying of someone else's work is copyright infringement unless the copying is authorized by the owner of the work or the copying falls under a "fair use" exemption.

What it's going to come down to here, however, is who owns the work.

In a case of an employer-employee relationship, the owner of the work is usually the employer.

In the case of a client-service relationship, the owner of the work needs to be specified in the contract.

Lack of a contract is a bad idea for both parties as in practical terms it will become more difficult for either side to prove what the nature of the agreement was. Circumstantial evidence such as the fact the client paid you a sum of money and that the design appears to have been created specifically for the client may suggest, but not prove, that the nature of the agreement was that the client bought the rights to the design. Lack of a paper contract saying otherwise would be a bad thing if you wanted to pursue this further.

Not the answer you're looking for? Browse other questions tagged copyright or ask your own question.

7
Who owns the design?
23
What to do if your website design got stolen?
10
Should I assign copyright of business card design?
3
Can a co-founder/client claim ownership of designs if IP wasn't specifically signed over?
2
Client is selling her business - can she on sell the design work I've done for her over the years?
5
Can a client use my designs on products I do not provide?
0
IP rights company - 3 PL designer (no contract)