we are having problems trying to come up with a graph that would show the current and the estimated value, while maintaining the simplicity of the graph and still making it clear at first sight what is estimated and what is current.

Here are some graph types we tried before(don't mind the changing graphic style, we've settled on the flat, boxy style for now), from newest to oldest. 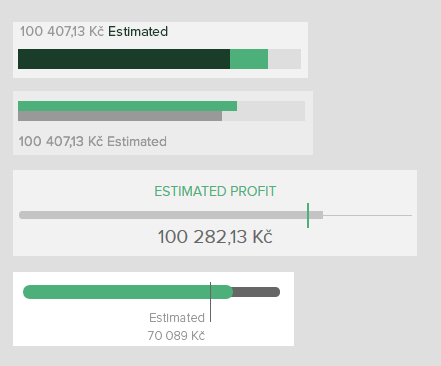 I kind of like the newest the best, the problem is when estimated becomes bigger than current, it'd have to switch colors and it could be confusing. The second is not bad either, but having them under each other adds to complexity.

What's worth noting is that the hero of the graph should be the estimated part, current got a graph of its own up above and it's here just for the context, so you can see the difference between current and estimated..

Which one do you think is the best, or do you have any other idea, perhaps something completely different(like only showing the difference or something), how to process this?

There's a name for this sort of thing: they're sometimes known as bullet charts (or bullet graphs).

An information dashboard specialist (and master self-promoter...) Stephen Few claims to have invented them (really, the core of the idea has been around for ages, he just wrote about good practice and gave it a name). Despite my reservations about his self promotion, his book Information Dashboard Design is worth a look if you design a lot of information reporting tools (just take his bluster and many "Rules" with a pinch of salt...).

As you've figured out, the top chart looks nice but just colours alone is problematic:

Unfortunately if your goal is communicating information, then when something looks nice but is impractical in some way, you really need to put function before form and go with what works best.

A tick on a bar is intuitive and unambiguous: it can't be mistaken for anything other than some other, secondary measure of the same thing. That's why it's promoted as a standard and a convention for things like this. Conventions don't sound fun, but if they mean people understand the message more easily and simply, they're worth following (and of course there's no reason not to add your own twist or flair).

You don't need all the cruft that comes with a typical bullet chart (like axis labels if they're standing alone). I'd suggest something like a merger of the best features of the top and bottom chart in the list:

This is what we ended up with. 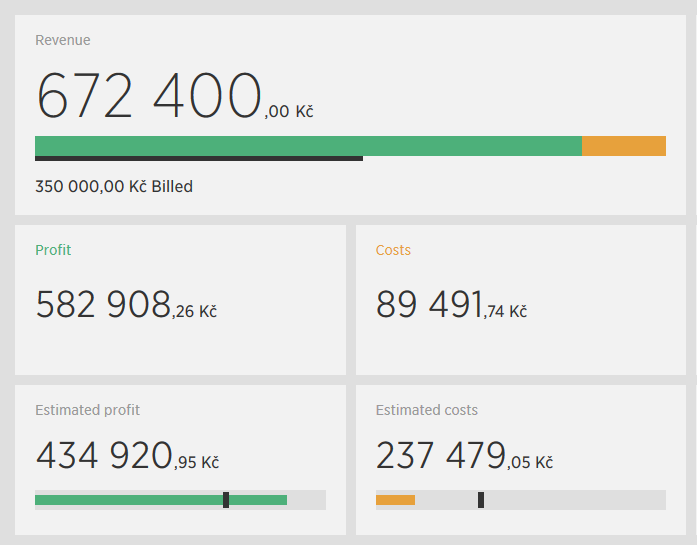 The reader can easily see there are two items being compared, it doesn't matter which one is bigger or which one is on top of the other, and you can keep your colors consistent from one graph to the next.

What you mention in your last sentence is, I think, key. You want to show the comparison between estimation and final result, but what you probably need to make visible is actually the difference between those.

If that's the case, then the focus should be on that difference, and not just on the total area covered.

Here, for example, that 'extra' area or unexpected profit is darker (this was done very fast in Balsamiq, so it's just to express the idea):

You can use an absolute scale to compare them too:

And if the value is less than expected, you could do something like:

In this last one I added some extra information that would make the graph more meaningful, like the difference between expected and actual values. Anything that illustrates the difference should be a useful extra.