How to calculate other colors with the same perceived lightness as a given gray value?

This is related to a question I asked on tex.stackexchange, which has a color aspect. The result of that question is the following image: 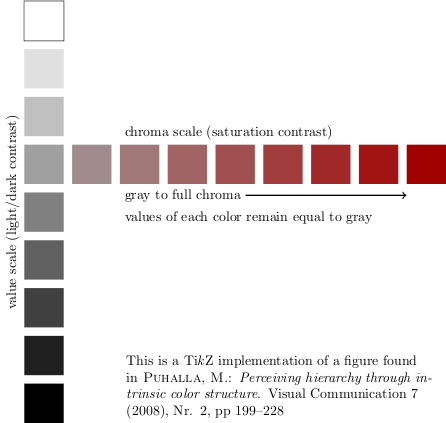 I have drawn a series of gray squares on the left, with a red branch departing to the right. The goal is to have different red squares with a different saturation, but all with the same gray value. In the hsv color model, they all have the same v, but when I convert the image to grayscale using Gimp, they are not converted to the same gray. Also the visual impression is that the red squares on the right are darker than those on the left.

How can I, given a certain gray, calculate colors with a certain hue and the same gray value (or, even better, with the same gray impression)? The colors used in the image are all calculated, so I prefer solutions that incorporate calculations as well.

I might have used wrong terms here - I'm a mechanical engineer, so please correct me where appropriate, or ask for clarification.

The suggestion to use the Lab color space has led me to some conclusions:

I guess it's time for experiments.

Done! After I got the conversion code running, it was wuite easy. The first step was to define the "target red" on the right. I calculated RGB2Lab(255,0,0) and changed the L value of the result to the desired L in the figure (L = 62.5). The colors are calculated using a linear interpolation in Lab space from (L,0,0) to (L,aTarget,bTarget). The result: 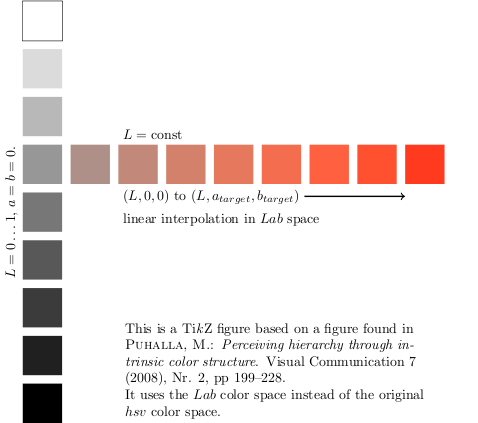 You could use Lab colour space to find your matches. Colours with the same L value as your target gray will look nearly identical when converted to grayscale.

So, the above advice from Nick only works for 50% Luminance. If you apply any other L value same to different colors, the gray result is different.

There must be a math for that, but you can do it on-screen by-eye.

If you create all the colors you want and then lay a gray element (illustrator) or layer (photoshop) with its transparency mode to "color" (or saturation or hue), that'll make all the elements below to reveal its luminosity.

You should make sure all the colors below that gray element have a saturation of 100, or you'll have gray-ish results, rather than nice colors.

Now, the problem is: With all the methods above, you'll make all the elements the "same luminosity inside the used RGB profile", i.e. same gray for the selected "device", and the worst part: The eye is a device, and there are differences.

You can show the same colors to different people and they will not find the same "evenness" as others.

Add that to the fact that you are setting those colors as "same luminosity" in the selected device, and not only are they all "estimated", as soon as you show it in a different device, the effect will fail, because every device has its own ability to light the red green or blue elements with different intensities, so you could be getting, e.g. red-er elements.

Also, if you make a blend from a gray to a color as above suggested, you have to make sure the gray element has at least 1/255 minimum in every channel (i.e. not longer gray) or the software will consider the origin gray as 0-hue, which will give you red-ish middle tones (because a blend between 0 hue and any other color will be half-way towards a red)

I'm a pre-press expert since '90s and my advice is: if you are going to go with the math, you should use the math for the eye (visual capabilities) as well as the ones for the device you will be showing those numbers on.

10
Formula for finding out the result of a color after applying x% opacity to it?

8
If these colors all have the same lightness, then why does my brain tell me some are lighter than others?
20
How to make a color appear the same on different backgrounds?
10
Color Theory: Is there a measurement of "colorfulness"?
4
How to create a color of the same brightness and saturation?
1
Is the low statistical correlation between the HSV channels, conditional upon the color name, a well known property of the color space?
5
What's the result of a secondary color mixed with the third primary color?
1
How exactly do blend modes work?
2
Palette of at least 10 hues with 4 lightness levels (by perceived appearance)
26
How can I detect if a color is gray