Is it possible to create 3D red/cyan anaglyphs in a hand drawing?

There are plenty tutorials online on how to create 3D red/cyan anaglyphs from existing photos in Photoshop or similar software. However, I'm wondering if it is possible to draw a 3D image by hand on for example a whiteboard using markers.

My plan is to tape together a red and blue marker and draw with it using the same rotation/inclination of the marker across the drawing. Will this give a 3D effect when viewed through red/cyan glasses? Or is the 3D anaglyph method more complex than just offsetting red and cyan lines?

As it may be possible in theory to draw an anaglyph stereoscopic image by hand this process is rather complicated.

Binocular disparity is Maths and Geometry

Our brain will compute the third dimension from the two independent flat 2D projections of our world to the retina of our eyes. Both the right eye and the left eye will see the objects from a different angle. This will lead to a shift in the position of the objects in relation to each other. 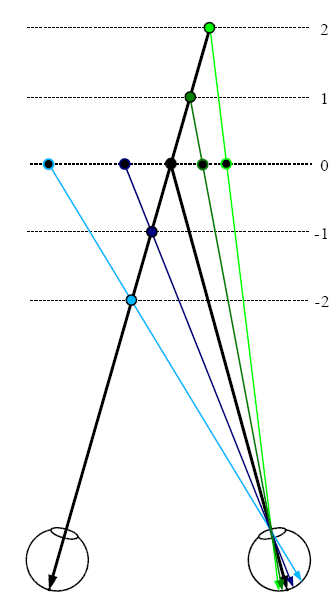 To simulate this in stereoscopic images we therefore need two flat images viewed from a different angle. The horizontal shift of object positions will depend on their distance from the eye. Therefore simply drawing two separated lines (as was propsed by using a pen with a cyan and a red ink on a shifted position) will not lead to a stereoscopic effect.

Only if the shift of objects for the left and for the right eye was correct we will get a proper stereoscopic effect: 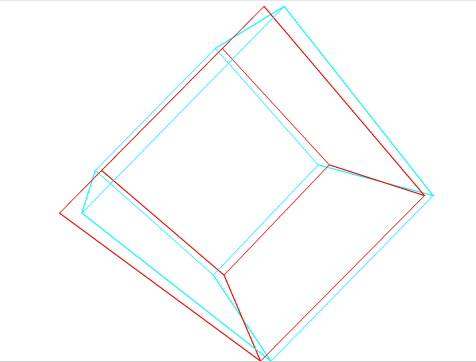 We will have to calculate the shift of each object in relation to its neigbours for each distance from the view point. This can be done with the help of computer algorithms but it is very hard to get that right manually.

Anaglyph = get the colors right

Initially the two different images needed for each eye were simply put next to them and were viewed with the cross-eye technique or using a stereoscope with two lenses. To also be able to view large scale images or prints the anaglyph 3D technology was developed as early as in the 19th Century. This technique makes use of a a pair of glasse with two colored filters for each eye and the complemtary color used in the print. Hence a cyan (or green) line will show dark with a red glass, whereas a red line will become dark with a cyan glass.

By just copying the above simple anaglyph with a pen on paper we can easily easily see that the stereoscopic effect which had worked fine on our computer monitor is extremely hard to paint on white paper. We simply can not easily draw a coloured line in subtractive color mode to be invisible when looking through a filter of the same color.

If we do not get the color perfecty right we will see ghost shadows which may eventually even destroy the stereoscopic effect if too strong. This will also often be the case for anaglyphs which were great on the monitor but are disappointing when printed on paper.

Possible approach on how to still generate hand drawn anaglyphs

I cannot offer any information on how to do this yourself, but it was revealed in one of the production videos for The Hobbit that artists Alan Lee and John Howe produced some hand-drawn red/cyan 3D concept art.

We thought we'd try and come up with some way of actually incorporating a 3D aspect into the way that we were producing the concept art that might communicate more clearly to Peter and to the other technicians. So what we're doing is two drawings. One is in red, one is in blue and the 3D glasses have a red lens and a blue lens, one for each eye. 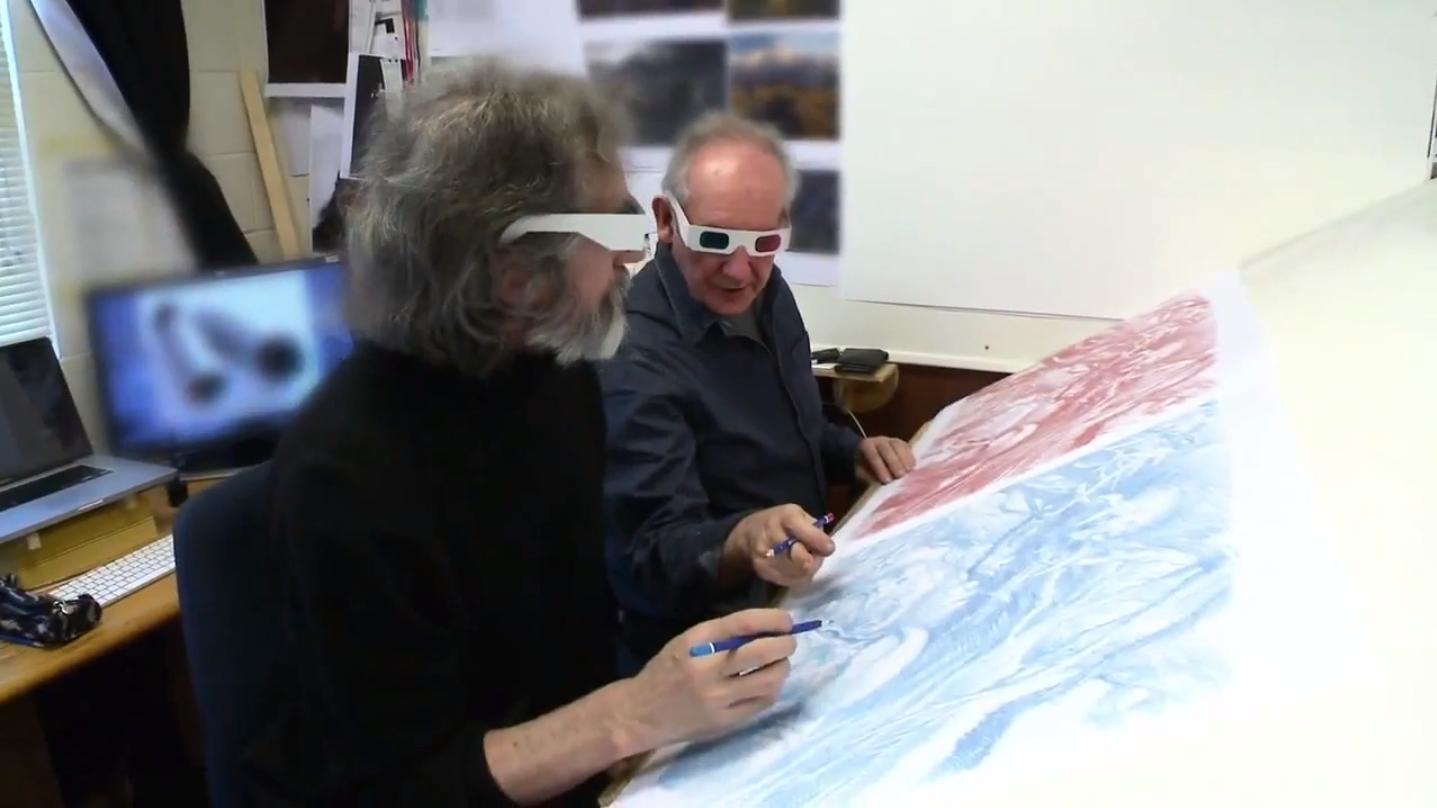 However, they don't offer much explanation behind their process. The artwork still had to be manipulated (presumably using a computer) to produce the final composite: 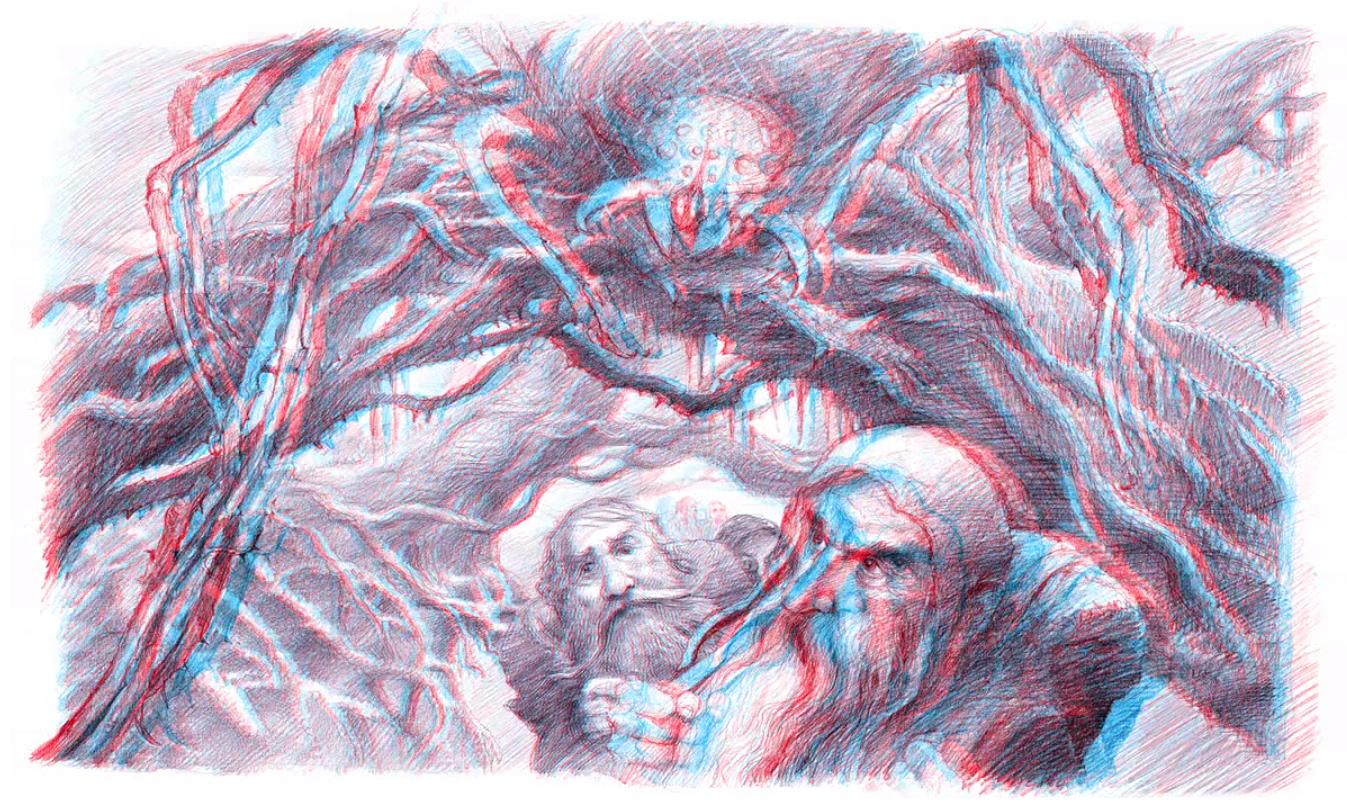 Side note: I do have a pair of 3D glasses handy, and it does indeed work!

There's a fun iPad app called DeepSketch. You wear a pear of anaglyphic 3D glasses and draw REALTIME in 3D. There's an easy slider that lets you adjust the depth on the fly. It's pretty cool.

I drew a picture with it, and then used it as a reference to draw a 3D drawing on a whiteboard. The dry erase markers that I used weren't quite the exact shade of the lenses on my 3D glasses, so there was plenty of ghosting, but it did succeed in giving an illusion of depth. I think it would look as good as any computer produced 3D drawing, assuming you could get the exact shade of color to match your glasses.

So now I need to either find (or create) some dry erase markers that match my lenses or else create my own lenses to match my marker colors. 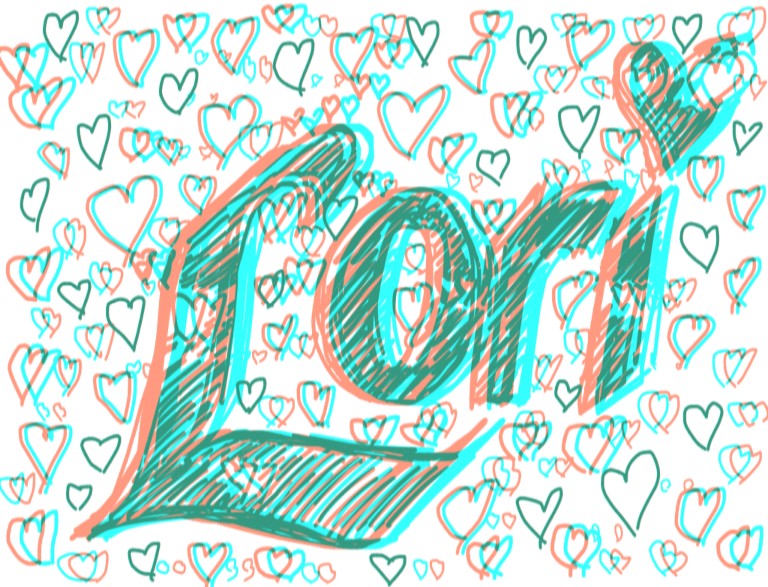 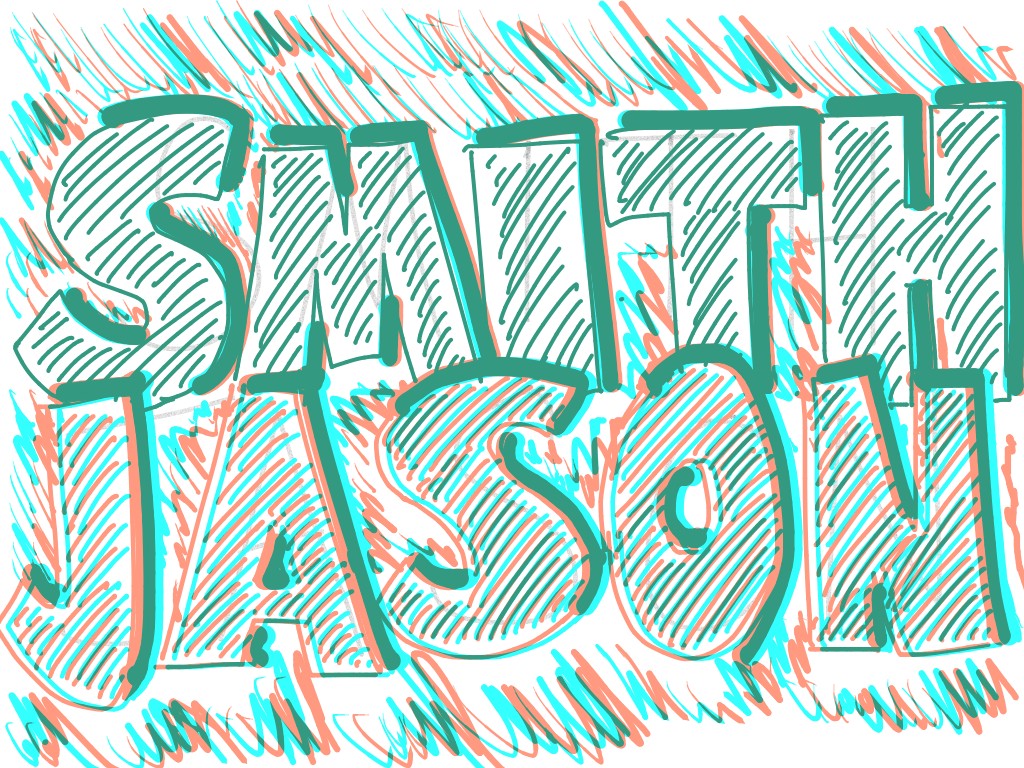 Should work if you get the separation between the colors correct.

It's nothing more complex than an offset of the red and cyan.

A little late to answer, but this is doable. The catch is that the pair of dry-erase markers would only be writing on one 'plane' or 'layer' of 3-D space.

So picture it as matte paintings. For each pair of red/blue markers, you could change the width and that would essentially be drawing on a particular plane.

The object drawn won't be 3-D, but the layers will appear 3-D.

And you could flip the markers over to then create negative-planes which would increase the layers you could work with.

The only trick party in terms of it being an installation would be to figure out how to get people to keep the two markers level with each other, as any twisting will ruin the 3-d effect.

if your looking to match the marker color to the glasses, get clear plastic and color with the red and blue markers and replace the lenses in your glasses with these new ones.

Not the answer you're looking for? Browse other questions tagged 3d drawing or ask your own question.

0
What is this style of art with blue and red shades called?

8
Using Adobe Illustrator without "hand" drawing skills
1
Drawing and importing hand drawn images into mobile game
4
If I reference a medical textbook or website for hand drawing bones is that considered copyright infringement?
0
Software for cartoon creation, to make a web comic without drawing by hand?
0
Possible to create 3d rotating foods?
1
Is it possible to use Sketch 3 to create 3d Card Effect?
2
Levels of hand drawing
14
How do I ensure a CMYK cyan that works in Red-Blue stereoscopic printing?
2
Is it possible to create these in Photoshop?