Inkscape: how to reuse part of a circular path (inner boundary) and connect it to another path inside of that

I use Inkscape: Imagine I have a shape like an O which is a path. Or better said: Two paths, one for the outer boundary and another for the inner boundary. But it is one object (one path??). If I change the fill color, then the color of the O changes, e.g. to orange.

Now what I want to do is to get the inner boundary path and connect it to another circular path that is inside the O. I want to connect it in a way to be able to fill it with a color, e.g. pink.

The result would be an O, which is orange and inside of that, but connected to the O’s inner boundary, a pink thingy (e.g. another O).

How can I achive that? I mean, how can I reuse the inner path of the O?

Is it possible without manually selecting all the nodes?

Your question is a bit unclear, perhaps a image could help.

If I have understood, you are starting from a "O" like object, like this (I've used the text tool to write an "O" and then I've used path->object to path):

And you want to achieve a sort of two "O" nested:

Starting from the first object, the orange one, this is composed by two paths: external and internal 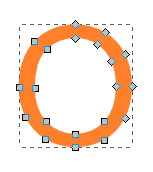 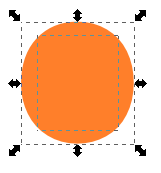 Then, I've selected the inner path, duplicated it (by copying and pasting it), filled with pink and centred the new path to the inner path (using align and distribute tools):

Here, I've selected the three paths, unselected the pink one (shift-click) and used path->combine to restore the orange "O". Then, I've copied the pink path, pasted and centred on the first pink path, select just this pink path and scaled it while pressing control and shift (uniform scaling centered on the object):

Finally, I've selected both the pink paths and used path->difference:

Perhaps it's simpler to perform than to describe.

3
Define a different color inside and outside a Compound Path
4
How do I fill closed paths in Inkscape?
2
How to continue an unfinished curved path in InkScape
2
How do I use inkscape to divide a circular ring into sections?
4
Inkscape - Force Bounded Region to be Transparent
5
How to connect three different nodes into one in an Inkscape?
0
How can I connect a path to an object in Inkscape?
0
How to properly fill color inside a shape in inkscape
2
How to adjust the stroke width of an SVG path between two specific nodes?
0
How to move nodes along another parallel path in Inkscape