Need help with the Color Combination for the Red

I have come up with a Basic Design for my web app. I want to use the Red color as it helps induce apetite. Well while designing i have managed to get the basic layout and design directions going. But messed up with the colors and as u can see have used blacks etc :(

I tried to brain storm as to how to make the layout more appealing having red as the main color. Could some one give me a few pointers as to how to go about it. 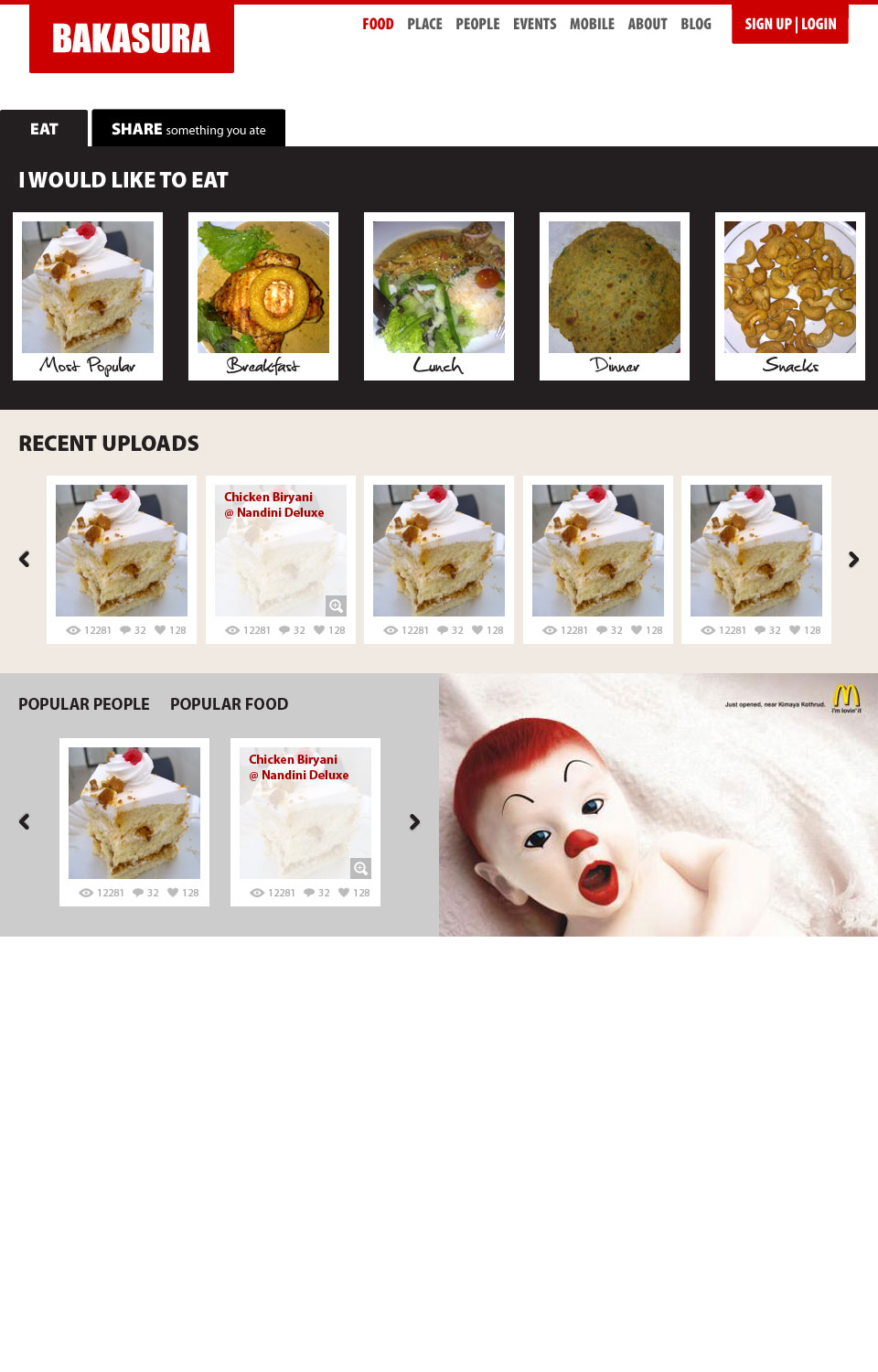 Hi again seems your stuck badly in this, check red color schemes online and get some working idea, try on this for working red pallets Color lover

and please look into these sites for some guidance....

I can't tell if the McDonalds thing is a random ad, or if you're going to be offering McTandoor. :-) That's not just a bit of humor. The reds in that image would be quite useful and necessary if it's a permanent part of the page, because the image is almost entirely red: only the black eyebrow and eye outlines, parts of the "skin" (orange) and the yellow arch are not firmly in the reds. You could build your entire color scheme with the eyedropper tool from that one image.

Keep your red motive color where it is, but darken and desaturate it a little (#bf1e1e would probably be enough) so it's not such a distraction. Right now it's by far the brightest of all the color elements on the page, so the eye stops dead at the site name. Make that red a little darker, precisely left-align the B of "Bakasura", the E of "Eat" and the I of "I Would..." and you will compel the eye down, into and across your top row of images.

Where you have black and gray now, use unsaturated reds (no more than 4 different colors plus a neutral gray or two). Oranges would also work -- you could eyedropper food colors from your popular images. Keep that top image row dark, because the contrast is effective and maintains a good eye trail. The #cccccc gray in the bottom left works well, as does the gray nav text. They will prevent your red mono or red/orange analogous scheme from becoming too sickly sweet.

Read up on monochromatic and analogous color harmonies for more information, and if your McDonalds ad IS a permanent part of the page, take off your saturated and unsaturated reds and/or oranges directly from that image.

Here is a great site I use when I need to create a color scheme. This link will take you to your color (cd0001) plus it's complementary/contrasting color on the color wheel.

Adobe has their own spinoff of colourlovers: http://kuler.adobe.com

Not the answer you're looking for? Browse other questions tagged color page-layout or ask your own question.

0
Do you incorporate sidebar menu into 960 grid layout?
7
How do I find a range of colors (ex. different blues) that will contrast well with another range of colors (ex. reds, yellows etc)?
2
How could I make more appealing titles on this particular design?
2
Selecting the exact color
12
A color wheel for the color-blind
2
Choosing colors for website elements based on logo colors
20
How to argue for color choices?
0
Changing to CMYK Color Mode Negatively Changes Texture Color That Was Made With Photoshop Colorize Tool