I'm trying to refine my ability to emulate a technique I see quite often on Dribbble and throughout the internet really. I think in some cases this is done via actual printing (letterpress, engraving etc) but it seems likely that this is often just executed digitally as well.

A few examples are here: 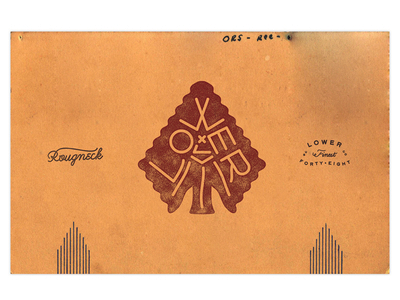 the shadow in the chief's neck / ear area: 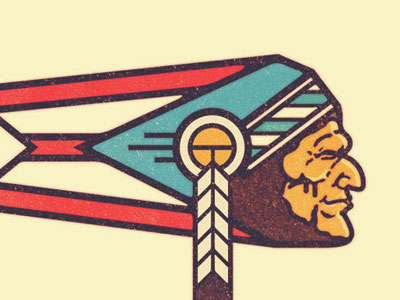 Basically it's a way to emulate an uneven ink density that would come from printing a large run with a stamp or plate that is running dry. I'm assuming that this is achieved through some combination of texture scans and layer filters, but I'd love to find a tutorial of some sort.

Of course, I've gone through some tutorials that pop up via a quick Google search but they usually utilize grain and noise filters and just end up looking way wayyy less convincing than the above examples.

It is easily achieved with a simple mask. Imagine a black rubber stamp. Ideally it would be perfectly solid black (the image layer), but for various reasons not all of the black is transferred (the mask).

The reason noise is not acceptable is because it does not "respond" like the paper texture in any way.

A Layer mask is a greyscale image used in such a way that the lightness determines the amount of opacity of the layer to which it is attached.

If you use a modified copy of the paper texture as a mask to simulate the exact "pattern of inconsistent transfer", you will have "marks" in the mask which are the same pattern, scale, and proximity as the marks which define the paper texture: they "respond" to each other.

Experiment with a full copy of the background texture, unlocked from the layer so that the layer can be moved without the mask texture moving. This might give you something where the inconsistencies of the paper texture itself cross through the stamp and heighten the effect.

You will have a base paper layer and then you have the stamped item as a layer of its own with the mask applied to it. The specifics are, as Scott says, dependent on the software package.

Any tutorial which covers "layer masks" will give you the tools you need. The hard part is deciding how to get the mask to have the same style of marks as the base layer.

Not the answer you're looking for? Browse other questions tagged illustration or ask your own question.

1
How would I create this “dot shading” effect

0
Tips for emulating this illustration style?
3
Recommended tools for digital art & paintings
5
Usage fees / royalties for re-purposing an existing illustration
3
What to charge for a first request to use a design for packaging
0
Full-time Illustrators - I'd really appreciate any salary advice
2
What is the graphic design term for “cartoony?”
1
Software recommendation for basic 3D shapes