Ok, bear with me here as I may be using the wrong terminology...

I have a nice image of a wooded scene (not handy unfortunately). Basically it is a winding dirt path through an area of forest, with the path surrounded by small blue flowers.

In my head, I have a picture of the effects I would like to achieve, however I'm not quite sure how to go about doing it. My googling has led me to increasing overall brightness, and changing the histogram, but I don't think this gets the effect I want.

Basically, I want to take my image, give the woods a kind of darker...HDR sort of effect (which I have been able to do by making it black & white, and then using a blend mode on top of the original), and then the important part: I would like to make the flowers "glow" their natural color.

In summary, my stumbling block is how to achieve a brightened region of color that accentuates these flowers, while still retaining a decently natural look, but here is where my Photoshop-fu breaks down and I end up with something very unnatural looking.

I'm using Photoshop CS5, and here's the image in question... 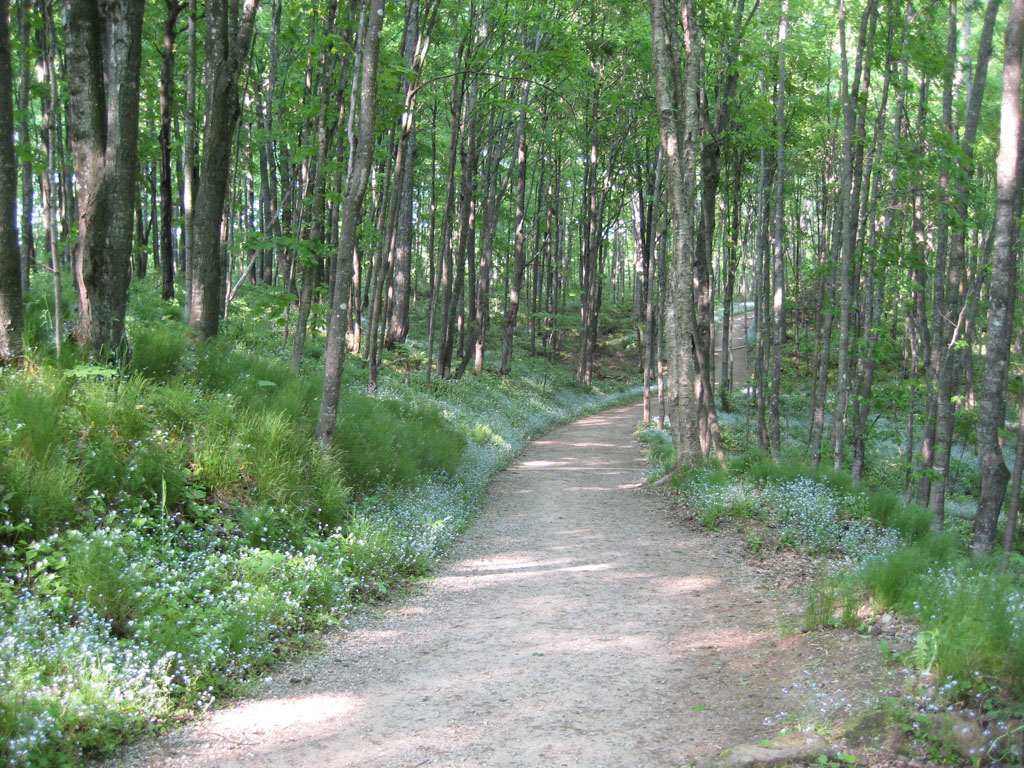 Ok, sorry guys. The image host is blocked where I work, so I'm just now seeing your wonderful contributions.

Hrulga is probably the closest so far, but what I was imagining was taking that a little bit more extreme. So basically I am hoping to take the somewhat fluorescent color you came up with and make it really glow in that area....maybe such that it seems like it is giving off a foggy sort of light.

For a quick and dirty answer, you could try

and fiddle with the Color settings there, if you have CS5-version of Photoshop. That would adjust the overall color in the image. Duplicating the image layer, adjusting and masking the unwanted parts away might do the trick.

It's usually good for popping out some details in the dark/bright areas of the image.

where you can select wanted color group (switch Master to Blues, for example), and deepen the color by adding plenty of saturation, and lowering the lightness to keep it realistic.

All of these adjustments aren't probably necessary, if the overall image is already close to the desired, just applying Hue/Saturation might be enough. There's plenty more tricks for it, some probably involving some layer magic that would make my head to spin, but hopefully these lead to the desired direction.

Had to try my own advice out now that we have the picture:

Flowers are looking somewhat fluorescent now, but that is probably on the extreme side of the wanted glow. But if one wants to push it to fantasy-like imagery, maybe a little glow halo would be handy...

So, I went totally overboard with this: 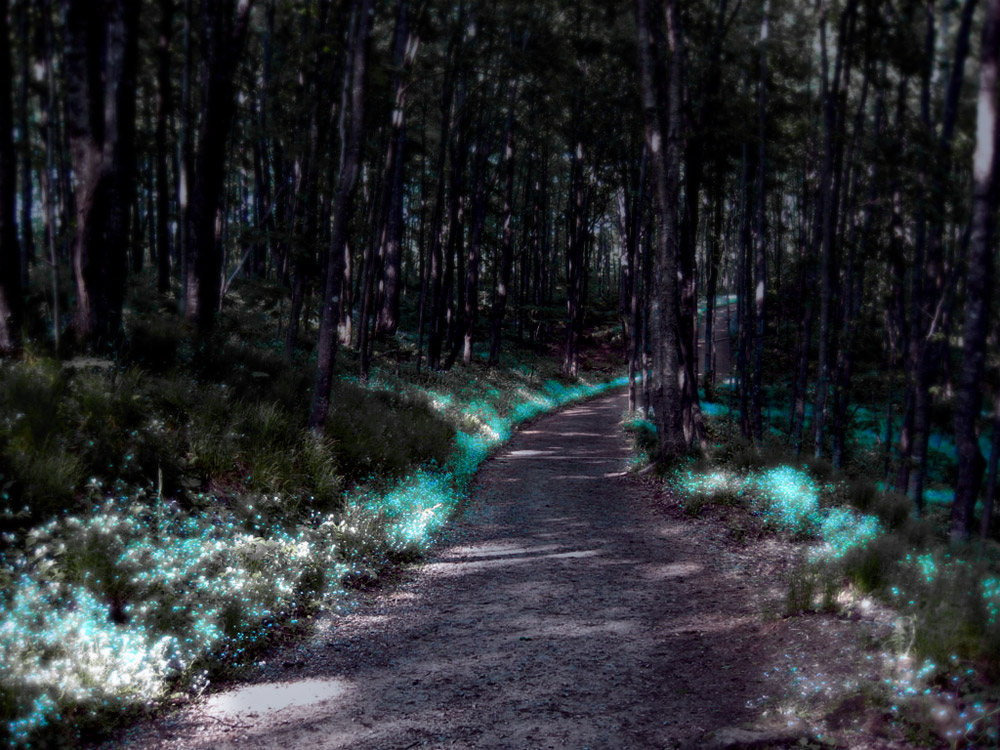 In my head, I have a picture of the effects I would like to achieve

its hard to read your mind with words :D its kind of trying on assumption if you can post any example output image or similar to your desired effect, it would be nice to give a try,

with your words i understood this 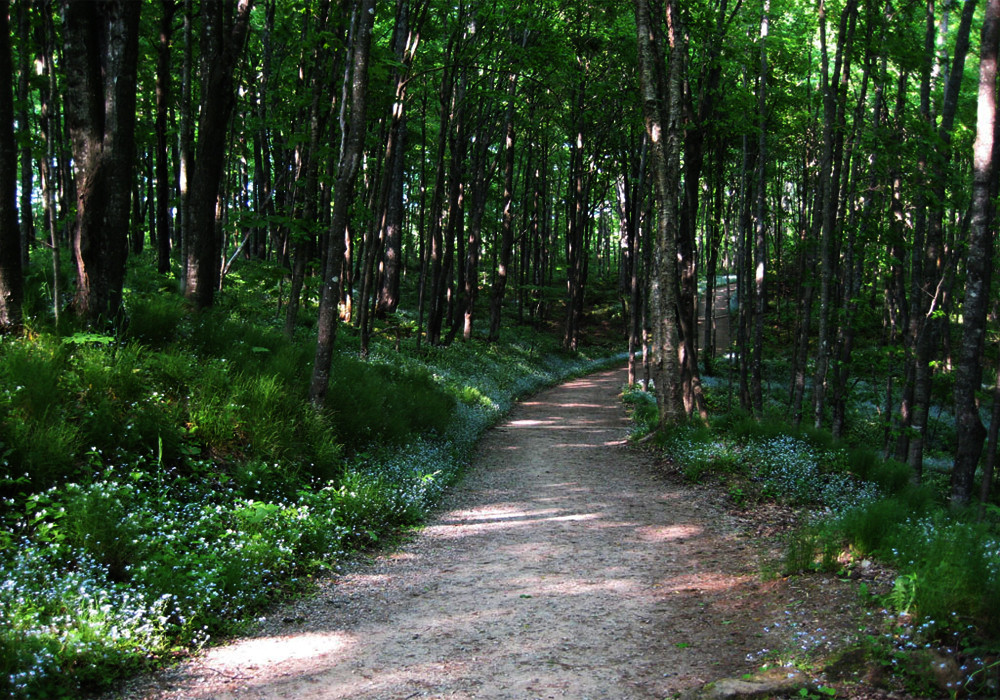 let me know if i am right or wrong,i would like to give some more try.....

For a really natural look in this kind of situation, there really is no substitute to working with the channels (which is what you're doing, in a roundabout way, when you made the Black and White layer and changed its blend mode).

This is a fairly big subject, but Lee Varis (of 10-channel workflow fame) gave an excellent presentation to the San Jose Photoshop User Group recently, and one of his examples is pretty much exactly what you're trying to do. The specific bit starts at about 1:23:00 in this recording, but I recommend watching the whole thing from the beginning, because the techniques he's demonstrating apply to all kinds of images.

Channels, as a subject, tends to make people's eyes glaze over until they actually play with them and "get" what they're about. Once you grasp the fundamentals, though, you'll use them constantly to make selections, adjust contrast and color, and generally amaze your friends. :-)

0
Photoshop Smart Filters
2
How to ensure that paint bucket tool fills region with EXACT color in Photoshop?
1
Display layer where luminosity is greater than fixed value
1
How to blur everything except fuzzy region of an image in Photoshop?
2
Fix or darken overly bright region on photo
0
Photoshop and Adobe Photoshop
1
Photoshop: let pixels through from layers below, depending on their luminosity