What's the font in this Utopia logo?

I need to get the name of the font used in this image: 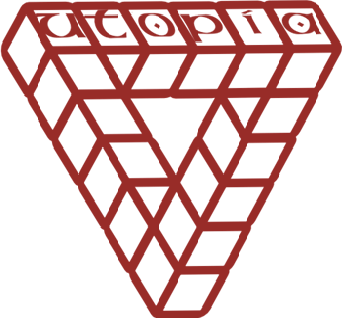 The guy who did the logo just took an existing image of the "UTOPIA" writing and slanted it to fit the cubes, so he doesn't know which font it is.

I'm pretty sure the guy who did the original writing told me the font name somewhere in the past but I can't contact him now (I'm in a hurry). I can remember the font has a 6-letters name, though (or maybe seven, but I think it was six).

Font services won't even process the image... I guess the slanting and the presence of the logo are preventing them from recognizing the fonts.

It's American Uncial with some added dots.

There are a variety of paid and free versions available.