What is an easy way to create a bulk of rounded rectangles in Illustrator?

Image is taken from this site.

Is there a way in Illustrator to draw a group of rectangles like this without having to draw them one by one? The idea is to divide the area into as many rectangles of size 100x50 which have a 10 gap between them. Is there something automatic to make this happen?

First, draw the shape, then go to Object->Transform-Move option window. 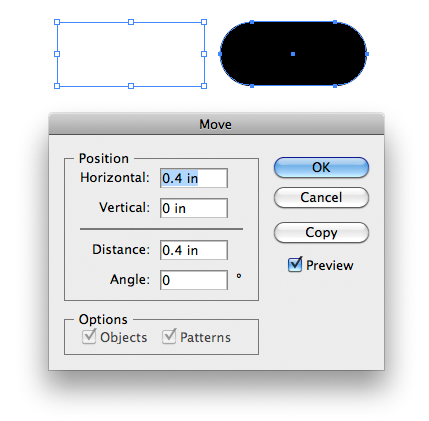 Turn on Preview and put in a horizontal value so you get the ideal margin between the 2 shapes. In your case, 10px. Hit Copy Now just keep hitting Cmd+D until you have enough shapes for one row.

Then group cmd+g all the shapes in the row, and do the same in the Move option. Except for this time you're giving 0 for Horizontal value, and enter the appropriate vertical value instead. Keep hitting CMD+D until you have enough rows.

Late answer, but there is a much simpler way...

Pattern swatches are really cool if you have uniform repetition. You don't have to worry about making sure every object is spaced properly; even if you use multiple shapes, AI will happily align the fills. If you need discrete objects, you can always expand the fill later.

There are some pretty cool examples of more powerful transforms at The Power (and ease) of Patterns in Illustrator.

Maybe I'm missing something here. Seems like a perfect case for a transform effect. Build your base rectangle then choose Effect > Distort & Transform > Transform. Set up either your horizontal or vertical dupes (move number + number of copies), accept, then do it one more time for the other direction.

The nice thing about this method is that you can adjust just one rectangle and affect the whole lot of 'em. If you need to resize it, you make your changes then go back to the Attributes panel to update the coordinates. I use it all the time when I'm playing around with grids in Illy.

I'd actually use the Split into Grid and an Effect to generate a lot of rounded rectangles of equal size and spacing quickly. Then expand appearance to have standard objects. 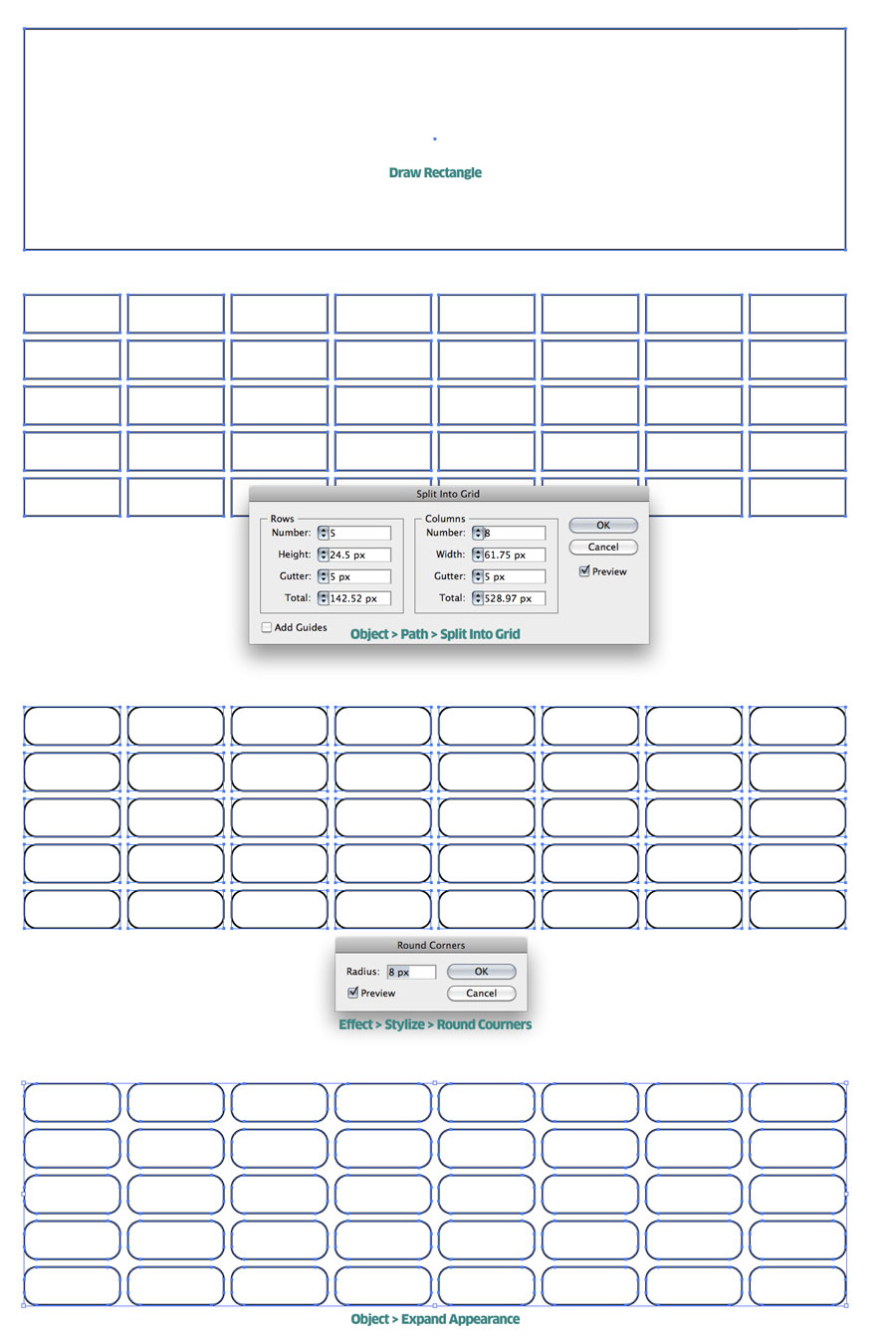 So there's three parts to this question: 1) Fast copying of objects, 2) Lining up row, 3) making these objects show appropriately spaced 'chunks' of an image. The good news is you can do the whole thing in about 20 seconds.

1) The fastest way to copy loads of the same thing in illustrator is: hold down alt+arrow key, and it creates and selects a copy nudged one unit in that direction. (it's alt on Windows, on a Mac it might be alt or maybe option?) Hit alt+right arrow 10 times and you'll get 10 copies all perfectly vertically aligned, almost on top of each other (holding shift as well gives more space)

2) To line them all up evenly in a row, a fast easy way to space them perfectly is to drag the far-most one to where you want the row to end, select all of them, open the awesome and underrated Align window (Window > Align), and hit the Horizontal distribute space button.

You can easily adjust the amount of spacing using this method: simply adjust the position of the far object, and/or delete or copy objects from the middle, and/or resize all, select the row and hit the button again, and it'll space them perfectly for you again. Repeat until you've got it looking just how you want it right.

When it's how you like it, you can then select this whole row, group it, and do the same thing vertically: hit alt-uparrow 3 times, drag the top row to the right place, select the rows, hit Vertical distribute space, tweak until it looks right, then select all four groups, ungroup, and delete those objects you don't need.

This is probably the fastest way [edit: second fastest, after plainclothes' excellent technique] - the whole task can take a few seconds, including tweaks and adjustments.

There are other ways too. It's almost as fast to create then expand a fixed-distance or fixed-number blend between two objects horizontally, then again between two groups vertically: doing so also gives you the option of having something change or fade gradually between each object, like colour, opacity or shape. That's a seperate topic, but here's a neat example of the basic principle (plus other stuff) if you're interested.

(I included some expanded text here as well, purely because it looks cool. Note that you need to expand text into fixed paths (object menu) and include it in the composite path in order to use it in a clipping mask like this)

Draw one of them. Then, cut, paste, align. Repeat as needed.

3
How can I easily deselect a path after creating it in Illustrator?

0
Can you create linked objects in illustrator that are not grouped?
1
Illustrator Divide Objects Below Modifies Objects in Locked Group
3
How would I divide up this vector map in Adobe Illustrator?
4
Little Gaps between rectangles when exporting .svg with Illustrator
0
Is there a shortcut or automated way to create a rectangle the same size of a picture on Adobe Illustrator?
7
Illustrator: A way to merge overlapping lines of adjacent shapes?
0
Illustrator saving as SVG causes transparent offset between objects
1
Is there way to automatically clean up empty groups in Illustrator?