What is kerning and what is the point of it?

From what I see here, it seems kerning is just rearranging the space between letters. However, the comments here lead me to believe there's more to the story. Is kerning really that simple? Is the only purpose of it to look nicer or is there some practical reasoning for it?

I think the Wikipedia kerning article essentially covers it, but the bulk of the article is about adding kerning information to a font during its design, or applications automatically using this built-in information to improve composition of a font's characters -- rather than the a fine-tuning a designer might do on a particularly problematic pair of characters in a headline.

As an example, say the revolutionary new product, the

was launched; that combination of italic/oblique and roman characters would probably not have been foreseen by the font designer, and so would require special treatment to avoid the dot of the i from colliding with the V.

Letter-letter, or letter-punctuation combinations that are only used in some languages are other situations that might require custom kerning by a designer.

Also to note, fonts contain widely varying amounts of kerning information - this is one of the key differentiators between amateur and professionally produced fonts, or even between different versions of the same font.

Yes, that is essentially it. From Wikipedia:

In typography, kerning (less commonly mortising) is the process of adjusting the spacing between characters in a proportional font, usually to achieve a visually pleasing result. In a well kerned font, the two-dimensional blank spaces between each pair of characters all have similar area. The related term kern denotes a part of a type letter that overhangs the edge of the type block.

the point of making it looking nicer is the only point, but it can be very important for a clean-looking typeface. The Wikipedia page shows how massive the difference can be: 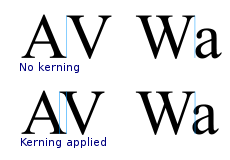 The main reason to pay close attention to kerning is for readability. Visual appeal is also very important. Another reason is that a properly kerned word will typically take up less horizontal space than an unkerned word, therefore allowing larger type sizes (this is useful for book cover design and poster design).

For more information, check out this previous article by me: What the Heck is Kerning? The Fundamentals of Good Typography

83
Difference between kerning vs letter spacing?
28
My Xylophone is off key; Understanding this kerning
15
Kerning Feedback

4
Which secondary whitespace character should I use for my seven-segment font?
3
Font with equal spacing between letters
4
Is this typeface intentionally so uneven, or is this some display error?
1
Looking for feedback on kerning and custom type treatment
5
Photoshop tracking and kerning: what do the number values mean?
2
Animation (Adobe After Effects): Text rotating without cylindric wrapping of text
2
What's the term of what I need to fix here - Umlaut dots missing at 80% zoom?
3
Need help with kerning my wordmark