How to create the illusion of depth with repeating patterns? [duplicate]

How do I create perspective with repeating patterns? I am very much a beginner level, as noted by my first attempt to create a illustration in illustrator. However, my attempt has provided me with various questions and obstacles on how to achieve the Hand-drawn illustration.

For instance, in the picture below – there is repeating previously design pattern. What technique could be used to create depth? 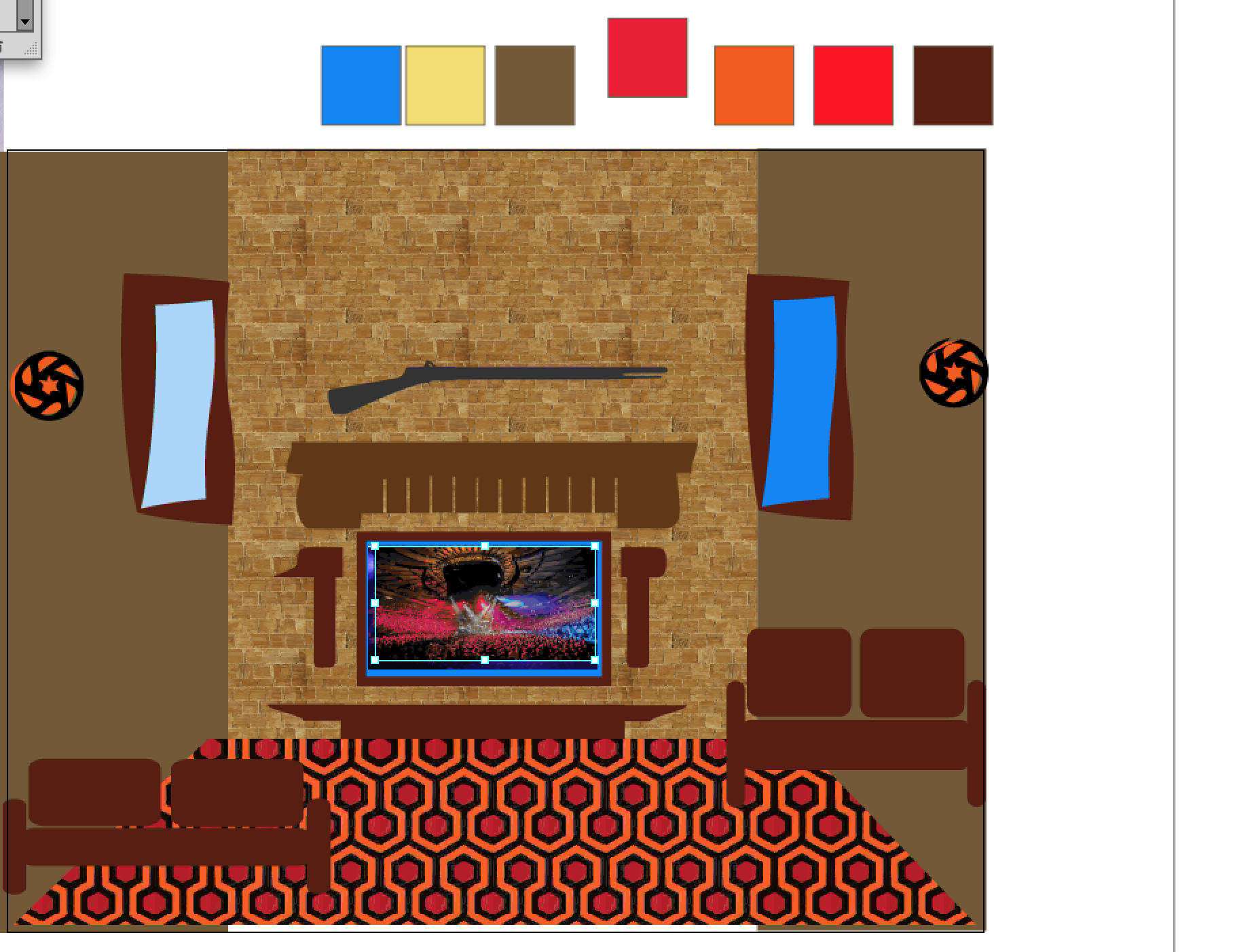 The end result should yield a perspective similar to this live trace. This may be off topic so please let me know how far or nebulous this question appears. 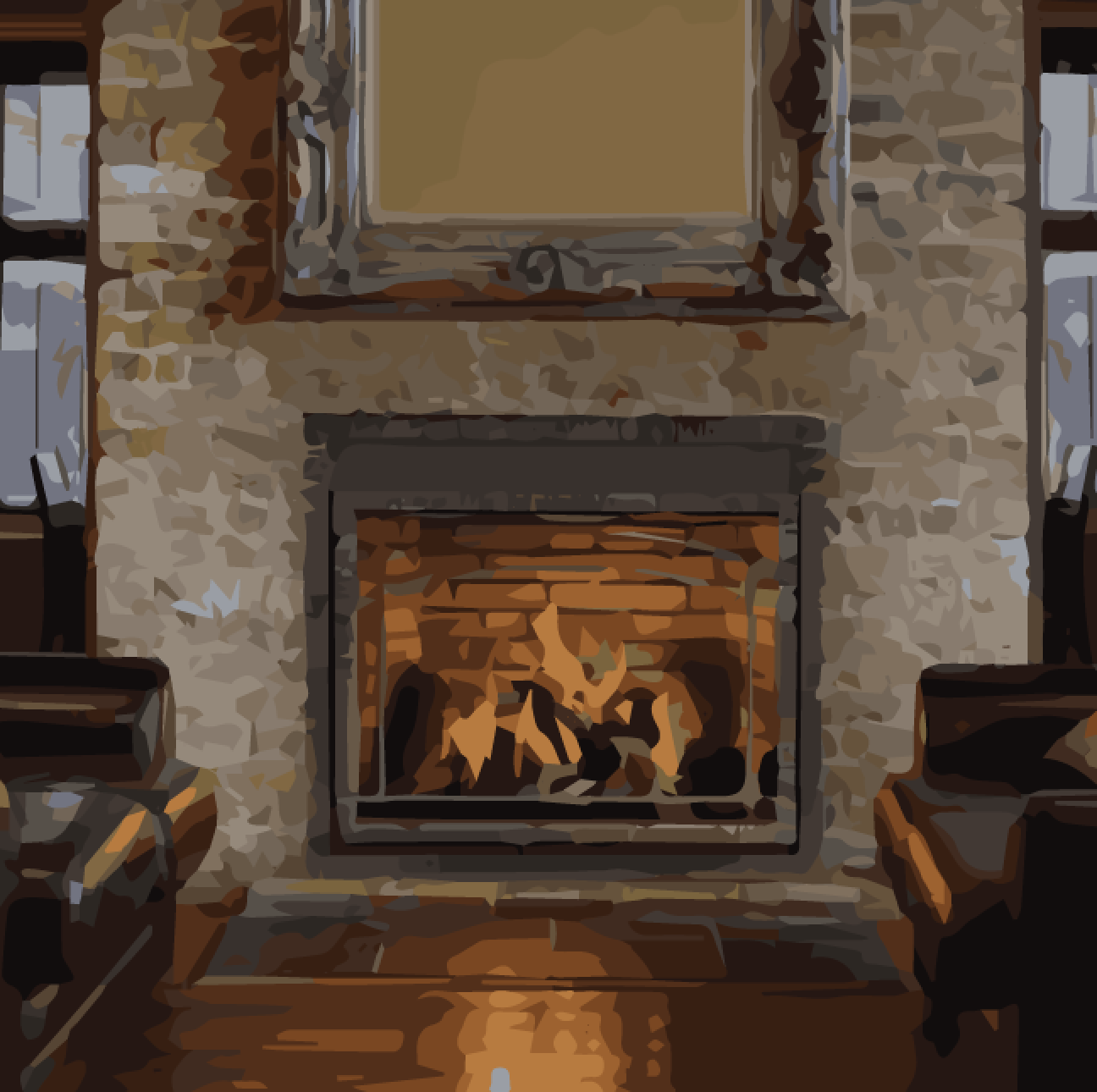 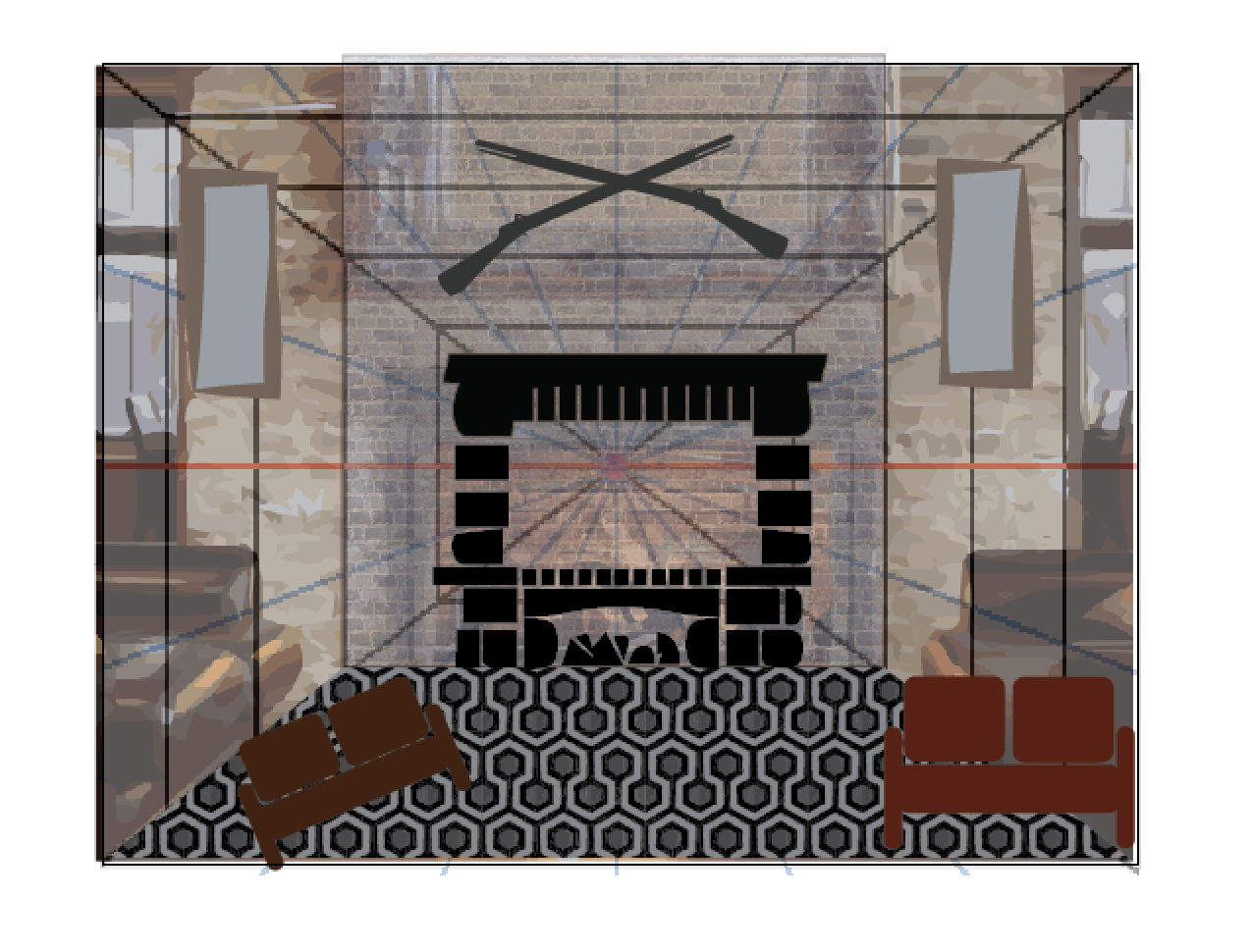 Are you only referring to the brick fireplace? A sense of depth needs a reasonably good understanding of perspective. And light. And composition. Regardless of texture. In this case, I would say your room is one-point perspective. Allow me to go through some principles, even though they may not seem wildly relevant. They are, though..

Even if you start out with a photo, it is important to keep an eye on the actual composition and how this affects the perspective. We handle a 3d world every day without effort, so the complexity of what it really looks like can be actually hard to grasp. 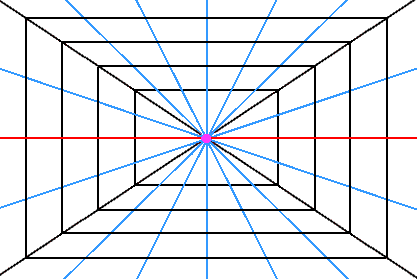 So, your images has an imagined horizon line and a vanishing point. Things in the image will be "distorted" according to the perspective. As an example; the carpet. I have here used a different pattern. Rectangles, to make it easier to see what happens. The carpet is reasonably easy, as it is pretty 2-dimensional. The great fun starts with 3d-objects. 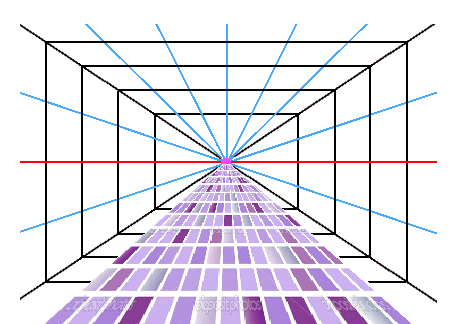 Your image would kinda be based on this model of perspective. So, everything "vanishes" into the vanishing point. Hence the name: 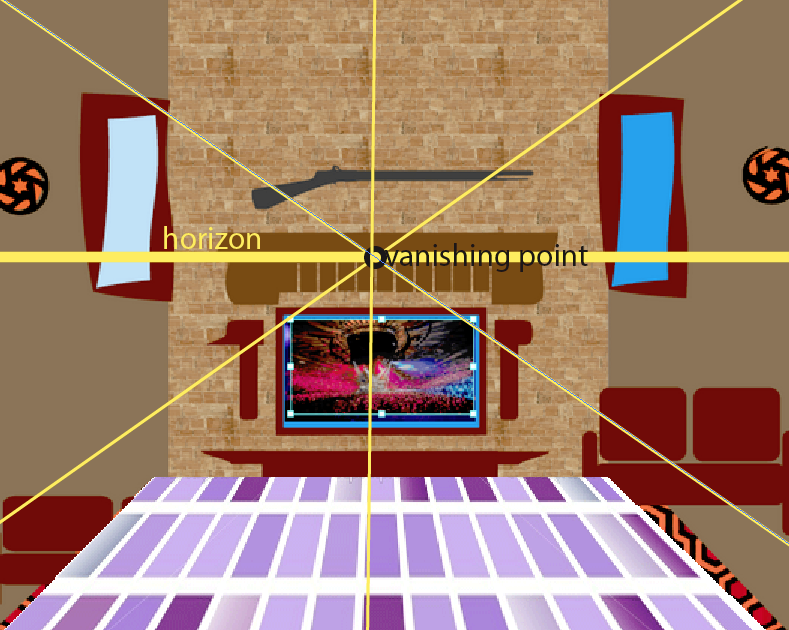 This might make it a little easier to visualise: 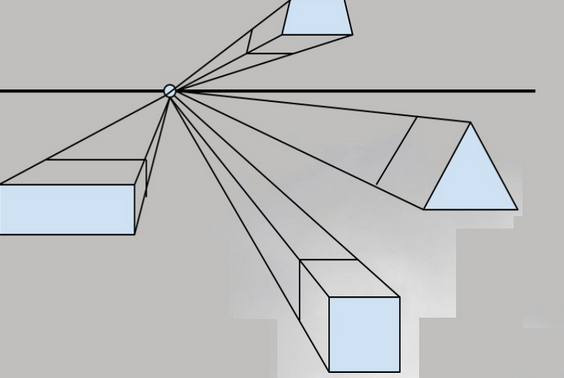 Just my two pennies: regarding composition, what is absolutely necessary for a sense of depth, apart from a reasonably good perspective, is to place things in front of each other. Not lots of stuff in a jumble, but simply do not align the edges of things. In your image you have the sofas/settees well placed (personally, I would angle the left one a little, just to make the composition a little more interesting.).

Since your vanishing point is pretty much in the dead centre of the image, you will not see the sides of the fireplace (I assume it has sides, at least a brick width sticking out from the wall). If you moved your vanishing point a little to one side, the depth would be clearer, and it would make for a more interesting image. This, of course will have a large influence on the texture of your brick: if you angle the perspective a little, the light-shadow will change.

Hope this helps. Light, is an entire book in itself.

A classic horror film from when film was silent, is called The cabinet of dr. Caligari what I find so brilliant about it, apart from the obvious historic view, is the way the sets are made, and the glorious use of crazy skewed perspective. Here are two images, and yes, the people are actors :-D So there are rules to perspective, and joy in going bananas and breaking them. The sets are used as a canvas to heighten the sense of horror and off-ness: 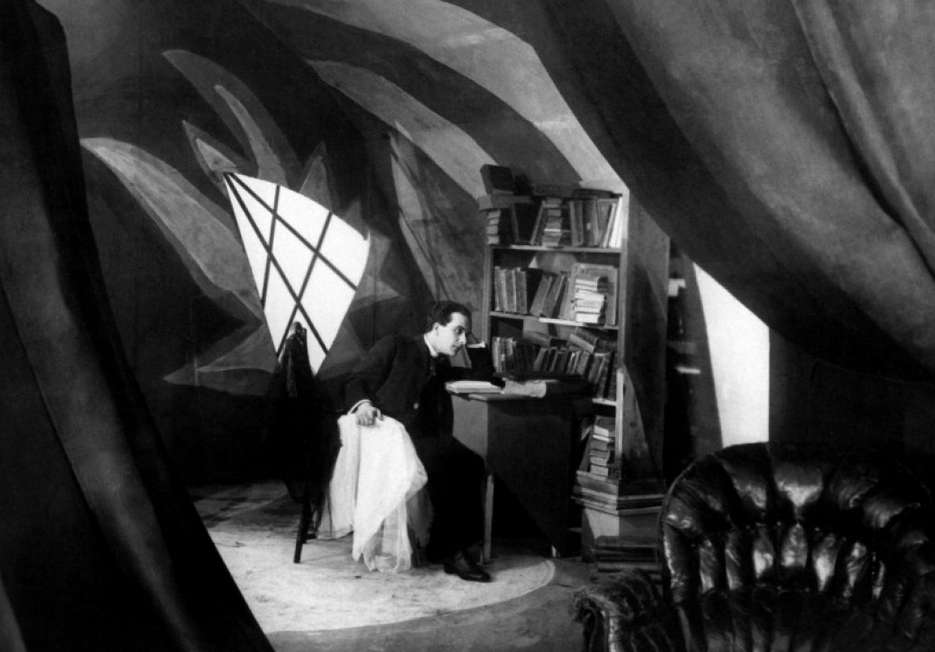 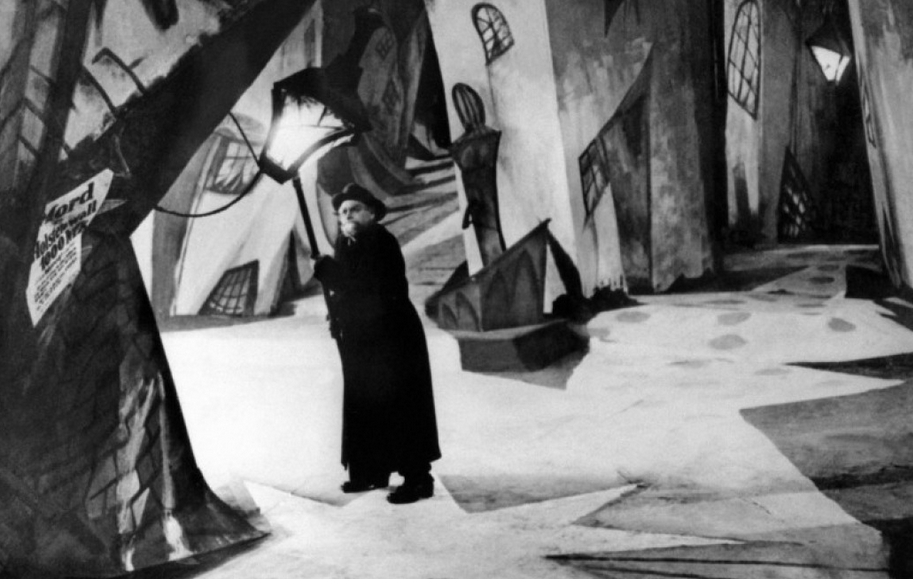