I believe that an extra-light or Thin version of Adobe's Myriad typeface exists, because Apple's been using it on their website.

So where do I find it? I can't seem to buy it anywhere. Any help?

I believe that they use Kozuka Gothic Pro (小塚ゴシック) for those texts. It's a Japanese font that ships with Adobe Creative Suite/Cloud.

You can find the font with the standard name 小塚ゴシック or enable english font names by: in the preferences > type pane tick the box next to "show font names in english"

Myriad was released in 1992, before the general appearance of extra-light weights, so I'm with Scott on this, it's [EDIT based on Hynes' answer] a custom variation of it.

There is a close-ish match available for purchase that is just for web at WebINK.

It says it's Myriad Pro Light, but if you look at the 24px size one in Chrome (Win 8) it's actually quite a close match: 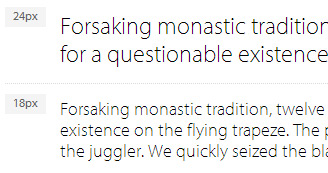 Apple is using images for the iPad mini texts in their site, this might be on purpose. There is a 'request' in Typophile for a thinner Myriad, you can add your signature to the petition :)

Not the answer you're looking for? Browse other questions tagged font-identification apple or ask your own question.