What is the name for the long dashes that sometimes replace the inner letters of a name?

What is the name for the long dashes that sometimes replace the inner letters of a name in older printed texts, and what is their purpose? 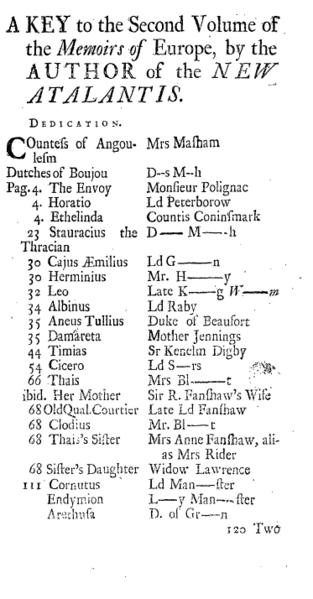 As plainclothes has said, the dash is composed of several em-dashes. One might call it a long dash...

Dickinson is best known for writing brief poems, often untitled, consisting of short lines peppered with long dashes, which mark her out as a more modern voice among her contemporary 19th-century poets. [Daily Telegraph]

...or perhaps an anonymisation dash, which makes it clear it blanks out most of a name and gives more indication of its length than simply long.

The purpose is explained in the Wikipedia article linked to your image, Roman à clef: it's a crude anonymisation technique.

In the novel, the character called Horatio is identified with the actual Lord Peterborough; and Endymion is fairly obviously Lady Manchester, but it doesn't actually say that.

[This question is perhaps more suited to ELU.SE.]

Em dash. It takes up the full body width of the font.

Not the answer you're looking for? Browse other questions tagged typography print-design typesetting character or ask your own question.

6
How long of a name do you budget for in a template?
9
What does BE and BQ stand for (or mean) on a font name?
5
What is the correct use of quotation marks for very long spoken texts in a novel?
16
What is the name for the kind of abbreviation that employs an underlined superscript to the terminal characters?
8
In a logo, is it okay to break the company name in two lines as needed?
2
What is the name of shapes that bleed off the edge of a book page, forming a 'tab' on the edge?
6
Renaissance type: what is the name of the long swash at the end of a line?
2
Typesetting in Dutch: Dijkstra vs. Dĳkstra
5
What is the name of this extinct type symbol?
17
Why don't any common typefaces use ascenders or descenders on capital letters (except Q and sometimes J), even though they make text easier to read?