I'd like to know if what I do is the correct process for what I want to achieve. I created some paths to draw the strokes of an illustration (a helmet).

As these strokes are paths, and they can't be merged together, so I decided to use the expand function of illustrator. This way, I could merge all the paths and have something clean.

The only 'issue' is the fact when I use this function, it generates a lot of useless anchors points.

I want to also mention that I used the 'width tool' on these paths, to give some thickness at some places before expanding. I mention this because I noticed it doesn't create as many extra anchors points when I expand without using the widthtool.

I tryed to use as well the simplify tool but that doesn't give nice result.

So finally, is there a good workflow to expand paths? Should I have managed this differently?

Here is a picture to show you what I mean: 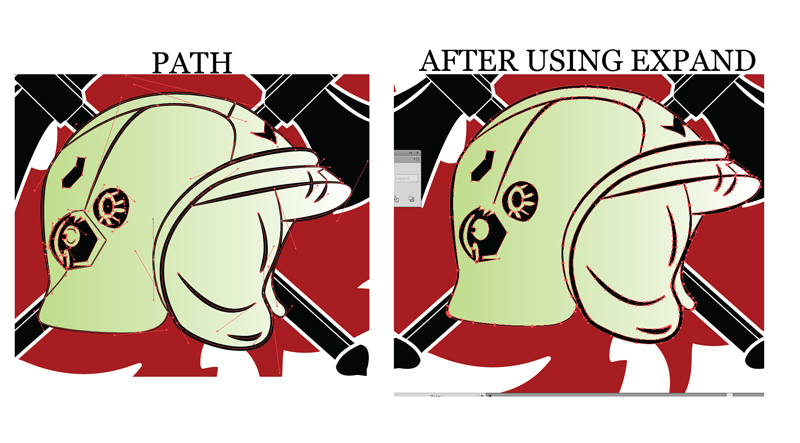 The color of the helmet is given by a simple shape placed behind the stroke. Once again, as a 'noob' with illustrator I'm not sure I did it well.

Astute Graphic's InkScribe (Smart Remove Point) should do a great job on beautifully cleaning those points. Here's their page: http://www.astutegraphics.com/software/inkscribe/

Probably it is the best way for Illustrator to do that without changing the appearance of the artwork. As you used the 'width tool' on these paths, that extra 'information' that you input into the artwork must be represented by those additional anchors. The more details you add (the more complicated width shape), the more points have to be added. If you don't want to distort your artwork you need to accept the situation as it is.

1
Is there a way to stop Adobe Illustrator from adding anchors when using the Pathfinder or Shape Builder?
1
Illustrator's Unite Mode Fills In Whole Layer
1
Why are my corners "inside-out" in Illustrator?
5
Best method for creating shape using anchor points
11
Why add extrema points when designing fonts?
4
How do I get rid off small lines that appear between paths in my logo?
0
How to delete hundreds of duplicate strokes on the same layer
1
Joining 2 Paths in Adobe Illustrator
1
Expanding blended strokes in Illustrator