I'm not a photoshop expert, but want to create a design to show text and drawing written on glass effect. End result should look like it is written/drawn manually (which I can manually) with black marker pen on a glass surface.

I'm not looking for a design that shows a user writing it on the glass surface. The focus of my design is the text/content written/drawn, but gives a feeling that the text/drawing was done manually on a glass surface.

The trick with the lettering on glass illusion is in the shadows and highlights. There are some very detailed and wonderful ways to do this, but since you're not too facile with Photoshop let's keep it simple with a quick-and-dirty example.

There are three main elements that say "glass" to the viewer: transparency, a cast shadow (because even the best glass doesn't transmit 100% of the light), and surface reflection (which is hard-edged on polished glass, diffuse on matte glass).

For this example I started with a grunge background image from Von Glitchka's "Slum Textures" set, and reduced its opacity to 39% above a white background, just for the sake of having some kind of background.

The next step is to create the "glass" layer. I used a simple black rectangle with its blend mode set to "Soft Light". 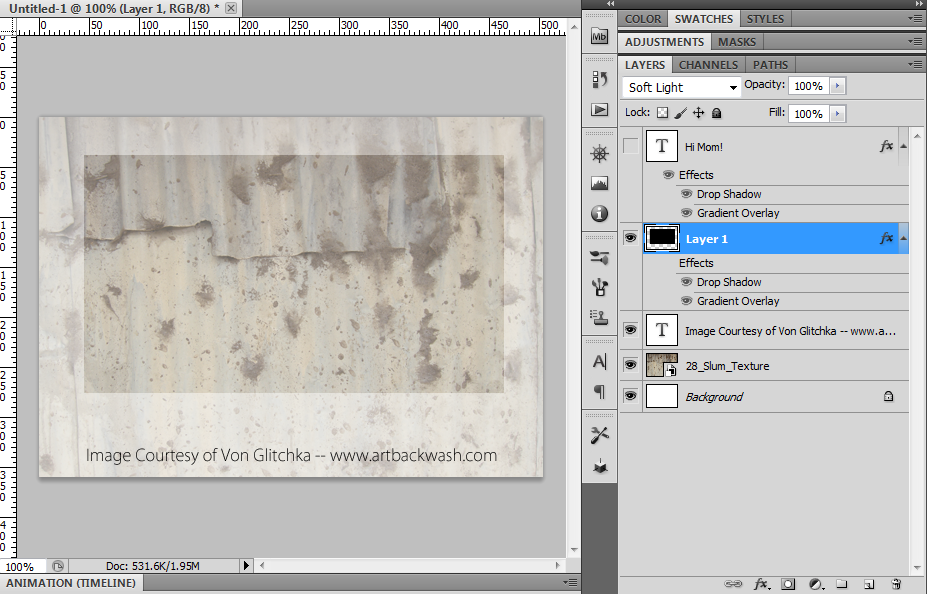 This gives us the transparency, but no clue as to where this rectangle sits in space. A drop shadow creates this: 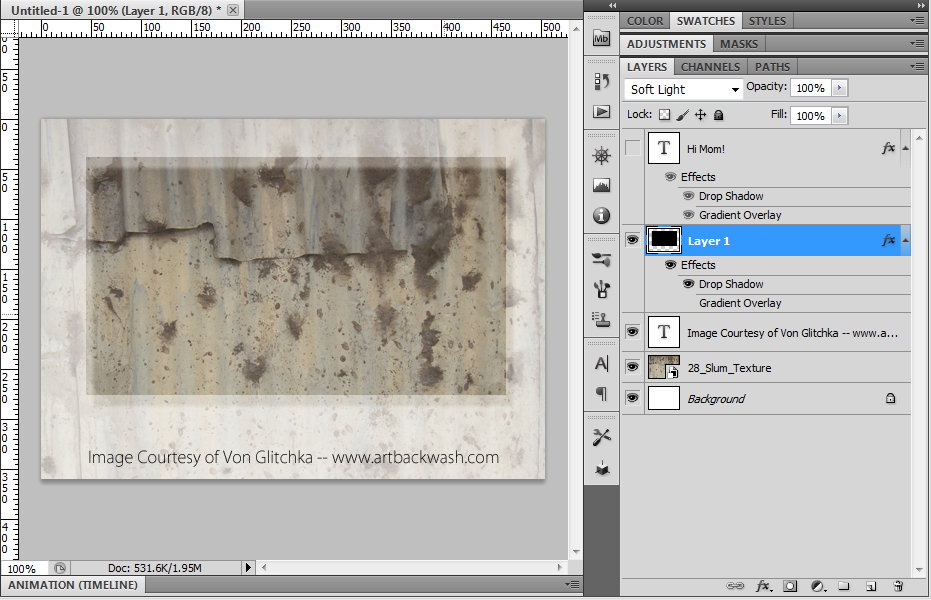 To make this drop shadow completely visible (which it must be to create the illusion), you must uncheck "Layer Knocks Out Drop Shadow". 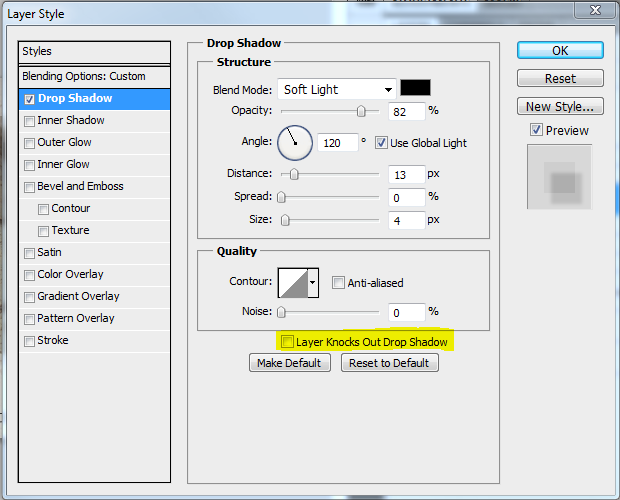 Glass also reflects from its surface. A simple way to give that illusion for "non-reflective" or slightly matte glass is to use a gradient overlay effect. In this case I used a metal gradient, changing its blend mode to Soft Light and giving it a bit of an angle: 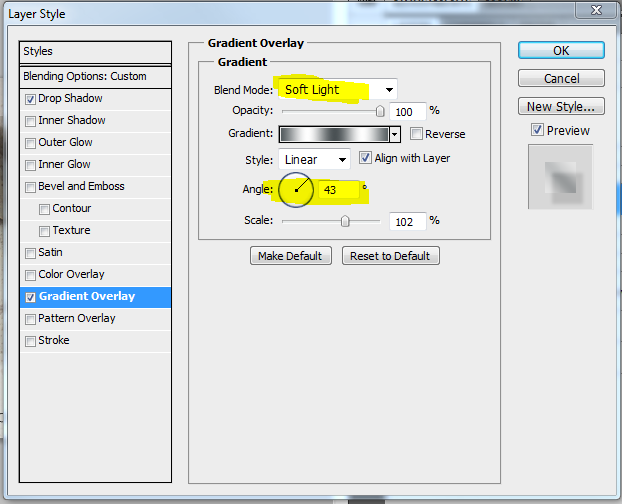 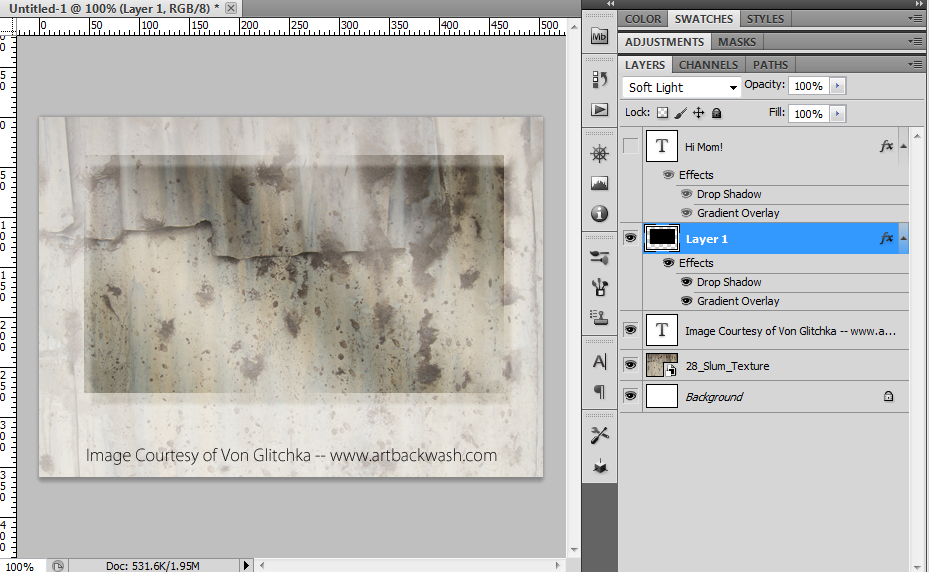 Now we can add the text. I've used Tekton Pro, but you can letter by hand or use a suitable "marker" typeface. 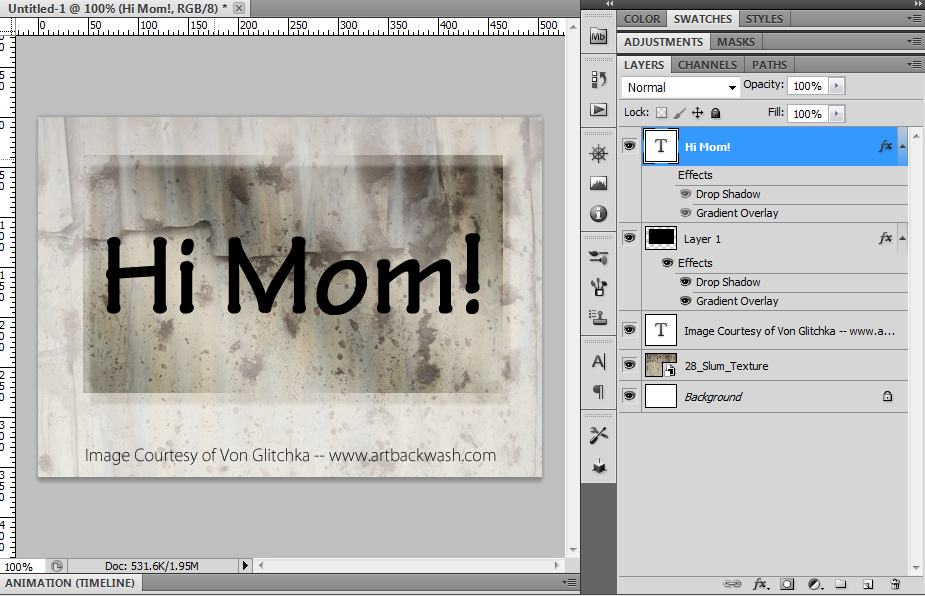 The text looks very "flat" and breaks the "glass" illusion because it also has to cast a shadow. But the text is opaque, so its shadow will be much darker than the light shadow cast by the "glass". In this case, leave the Blend Mode at its default of Multiply, and adjust the opacity until it looks right. IMPORTANT: The Distance, Size and Angle must be the same as you used for the glass, otherwise you will break the illusion. 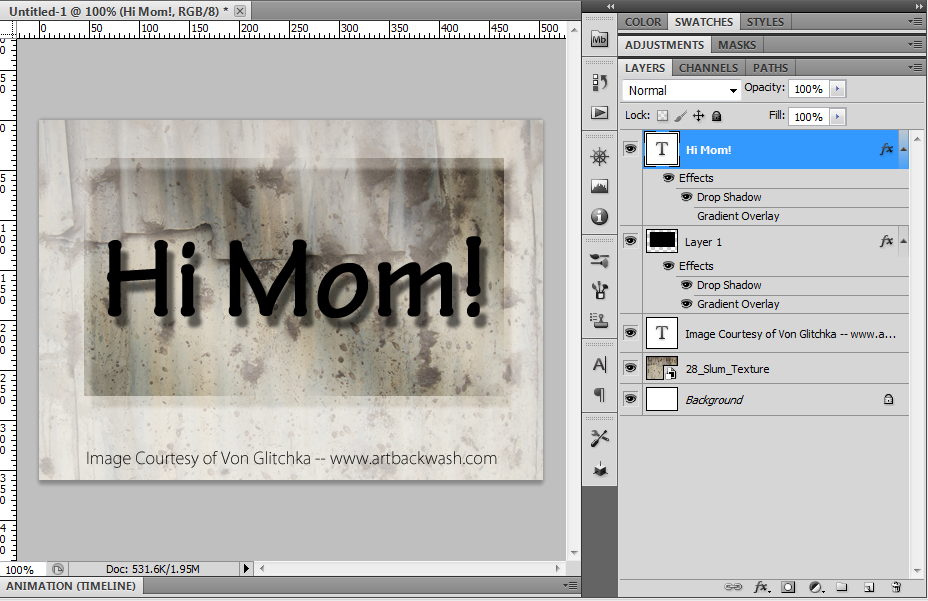 For extra credit, since Magic Marker(tm) actually has a sheen to it, we can add that using another gradient overlay, this time setting the blend mode to Hard Light, increasing the Scale to 135% to spread it out a bit, and reducing the opacity to 27%: 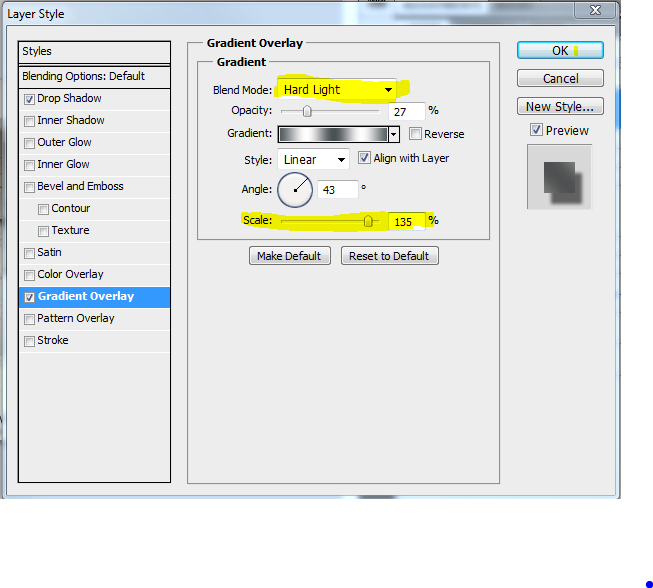 This gives us a final result that looks quite convincing: 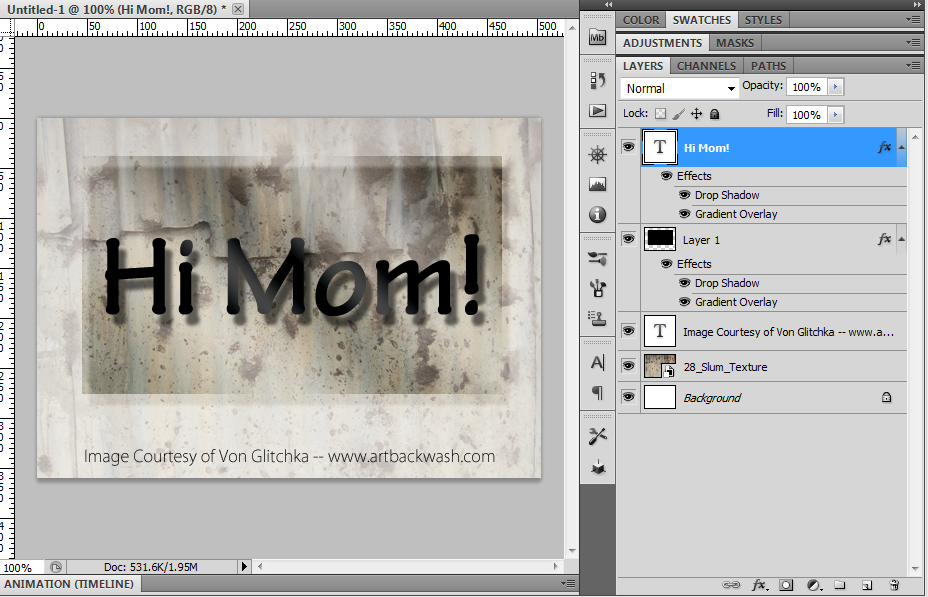 To remove the slightly "smoked glass" effect, reduce the FILL (not the opacity!) of the glass layer. To give it a deeper smoked glass effect, change the blend mode to Multiply or Overlay and adjust the opacity.

I hope that gives you some ideas. There are many variations on this theme, so it very much depends on the exact "look" you're going for. Just keep in mind the three visual clues that say "glass": transparency, shadow and reflection. 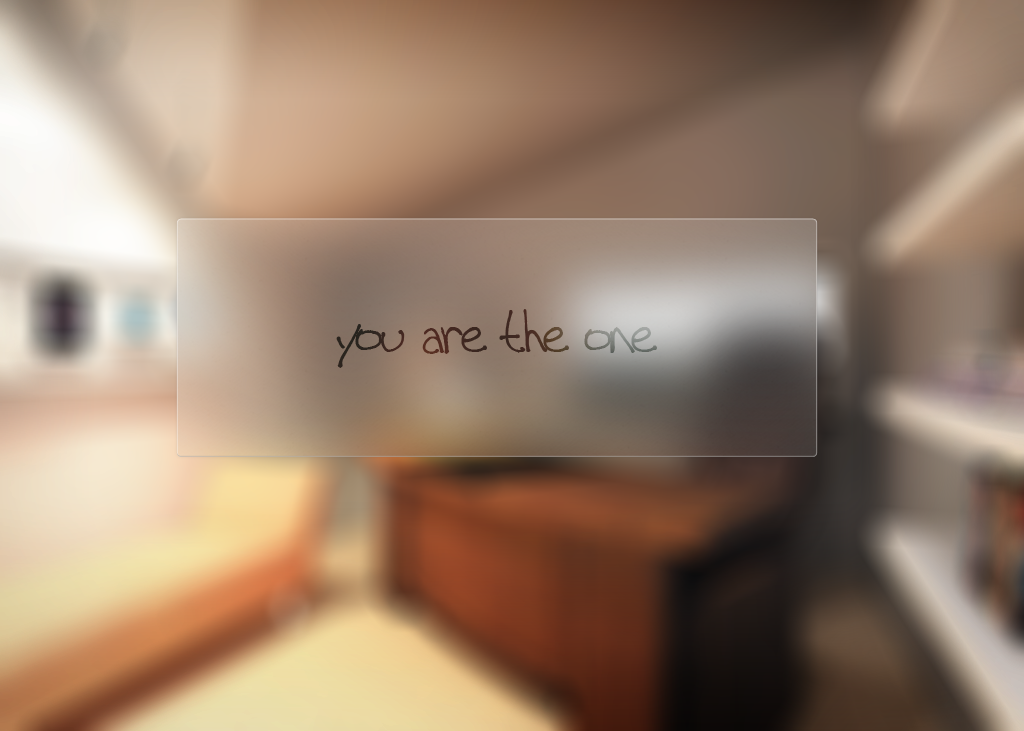 Isn't this a better effect. I used for the box:

Then i used mask the desaturated layer, as you can see some places have more color and some not. I also had used lens blur.

1
How create this glass effect in Photoshop
1
How do I create a partially transparent overlapping "Stain Glass" effect with shapes in Photoshop?
5
Ideal way to wrap a label around a bottle (3d extrude?)
2
Transfer the shadow of an object on white paper to ruled paper
1
Are these designs just images and not relating with the product any way?
2
What are some techniques for designing realistic-looking planets and moons?
1
Is there a way to attach or 'stick' the end of a path to an image layer?