How do I go about finding a font that says “safe, secure data”?

does anyone have any suggestions for a font and type treatment that says "safe, secure data?"

to me, the 'safe' part means big, bulky, with perhaps a steel sheen, impenetrable. however, the 'data' part means a more elegant styling. i have had difficulty finding such a font. i have a large font catalog and nothing seems to fit. i've also tried searching design sites for new fonts, but still haven't found anything that seems to fit.

i would appreciate any suggestions, thank you.

Fonts don't say anything that specific.

At most, they can give off a broad, general vibe. But in terms of saying anything specific, it's going to depend heavily on context.

For example Bodoni may say 'classic' in general, and when applied to the cover of Elle it now says something more specific: 'high fashion'.

Futura may say 'industrial' in general, and when used by Wes Anderson, it now says 'quirky Bill Murray'.

Fraktur may say 'Old Germany' in general, and when used by Scandinavians with Guitars, it now says 'this is a death metal band'.

Comic Sans may say 'casual' in general, and when actually used in any context, it now says 'we don't care enough about ourselves to pick a decent typeface'.

OK, that last example is a bit tongue-in-cheek. But hopefully you get the pattern.

So you're not going to find a typeface that says something as specific as 'safe, secure data' that type of meaning is only going to come with your help as you apply the particular typeface in context.

Is this for a header or for text? Just browsing through Google webfonts I found:

For headers maybe something like Ubuntu Condensed, Orbitron, or Titillium Web. 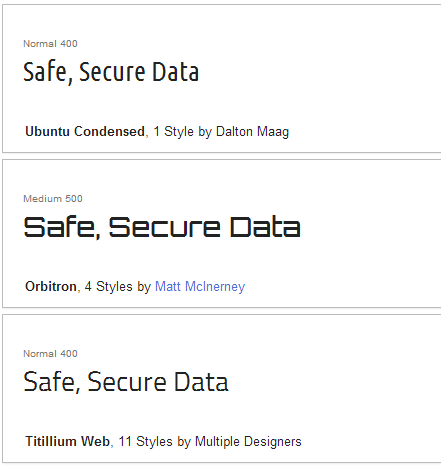 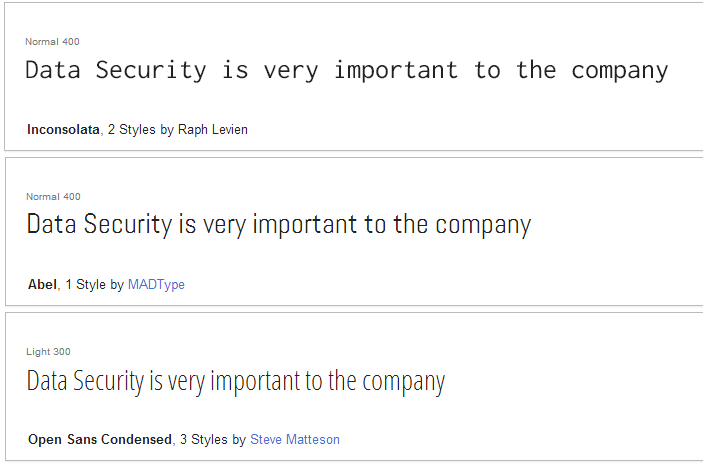 I have to agree with Yisela, its hard to tell what you your going for without any examples.

At RSA this year there was everything from high-gloss, extra-bold fonts that looked like they were a component from an F-18 to lightweight geometric fonts that were in keeping with flat UI(these seemed to be the majority), so finding the right font is going to be pretty subjective and you could really go either way.

0
Which font conveys a feeling of security and credibility when dealing with banking?

61
Web Safe Alternative to Myriad Pro Font?
2
A font that covers the UTF-8 encoding entirely?
7
Term for a font that leaves no loose parts
2
Web font that includes both alphanumeric characters and icons
0
Font that is similar to the Hornsey Road Bath and Laundry painting in London?
3
Finding a clean, corporate sans font whose capital “A” has vertical sides / a square-ish top?
1
Open web font that is somewhere between Roboto and Ubuntu
6
Looking for a simple font that is similar to how people actually write characters