Was doing some reading and came across this which I found very insightful:

As with many of the features to be discussed below, this is not a binary but a gradual contrast -- there is, at least in principle, a continuum of boldness, even if technologies like the word processor reduce it to a binary choice.

It is true that computers reduce it to a binary choice. So is there a way to expand the number of iterations any given font has within those binary choices? I'm imagining selecting my text and then using my scroll-wheel not for font size but for font thickness, being able to stop not on 2 or 3 or 9 thicknesses but limitless thicknesses for a given font.

Does anyone know of any studies or conceptual graphic design projects that have looked at this?

You want to look up the Multiple Masters Fonts --- these were created w/ the idea of interpolating between different styles for a font and weight was frequently one of the axes.

Many type designers will use MM technology for their underlying font designs, so a given set of outlines will be compatible --- just set the same text in the two different weights, convert each to paths, then select a matching node between the two and blend the paths for some reasonable number of iterations, one of which is to be where the instance you want will appear.

The binary choice part would be 'fake bolding'. Something you might see in your common word processor.

When you select 'bold' most modern word processors:

But in terms of the typeface itself, no, it's not binary at all. A typeface can have as many weights as desired and created by the designer.

Some typefaces may have several weights such as Helvetica Neue, which has ultralight, light, book, medium, bold, extrabold, and black. 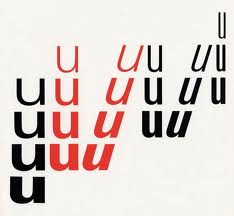 And WillAdams points out Multiple Masters which was a technology within a typeface to allow users to generate any weights they desired in whatever spectrum the typeface designer allowed.

To answer your specific question:

As a user of standard word processing software and the like, no. You are at the mercy of what the type designer designed.

However, if you have access to multiple master fonts, or font editing software, you could manually create a version of a typeface that fits your particular needs. This is no simple task, however.

Probably the most extensive implementation of this idea is Metafont. Metafont is a system, designed to work with TeX, for designing parameterized fonts. It's a combination of a programming language, an equation solver, and a font rasterizer. Unfortunately, the output is device-specific bitmap fonts instead of the outline font formats that are popular today.

Basically, a font designer using Metafont would write a program (in Metafont's special language) to generate the letter shapes he wanted, using variables for all the dimensions, including stroke weight. Then he can use different values for these variables to generate various styles of the font.

Knuth's Computer Modern font family has an extensive range of styles, but it seems to only have regular and bold weights—although anyone could add a new weight by changing the dimensions that affect stroke width.

There have been various failed (all of them) attempts to automate the generation of different font weights. They failed because they are pretty simple algorithms, and while they theoretically do the job, they range, aesthetically, from poor to awful in their output. A font has to be drawn at the weight and for

Back in the long ago (I know you know this, but others may not), a "font" was a complete set of characters of a particular typeface in a specific size. Each character for each size was created individually to look right on a page. Letterpress characters took into account the fact that they would be impressed into the surface of the paper. They were three-dimensional.

The problem with scaling is that a font is drawn to look optimum at a specific size. Enlarge it or reduce it too much, and you generally end up with a degraded appearance that won't work in professional design. Photo-typesetting addressed with with different sets of film for use in certain ranges of final output size.

The same principle applies to bolding, extending or condensing a font. You can't just "Offset Path" and end up with a pleasing variant. There's an ocean of garbage fonts out there from the 1990s era when people went nuts with Fontographer and similar programs, churning out "type families" that consisted of nothing but machine-modified versions of a basic font. They come bundled with consumer-grade layout programs like Print Shop.

A bold font has to be drawn as a bold font, and its kerning has to be adjusted differently than a light, medium, or heavy version.

The same is true of size. Great display faces are drawn with much finer detail than text faces, and can't be used at text sizes. Great text faces look clunky at display sizes when compared with the same font at text sizes. All professional fonts are drawn to be used within a particular, fairly narrow range of sizes. They are definitely not drawn to be arbitrarily "emboldened."

To make the point really obvious that it's not just a matter of adroit mechanical scaling, here are samples of Garamond Premier Pro in normal-weight Caption and Display fonts at 30 pt (headline), 18 pt (subhead) and 12 pt (text). 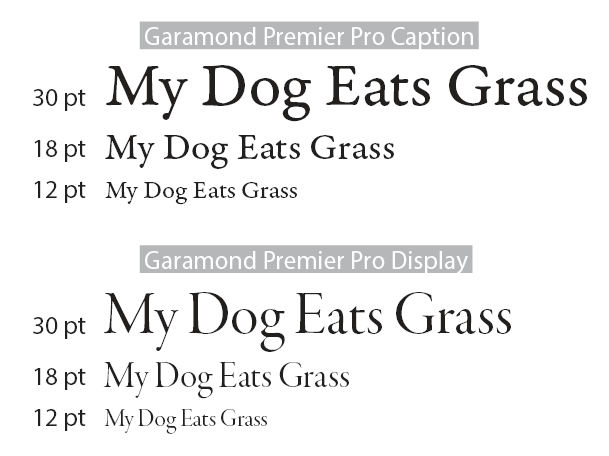 Having harrumphed all that, there are (rare!) occasions when you have no choice but to fake it, when the weight you need is semi-semibold and you only have regular and semibold to choose from. Provided you tell no-one, you can fake it by adding a very fine stroke to the outside of the characters and adjusting the tracking and kerning manually. This can be useful when you have white text reversed out from a black background, for example, and you need to enfatten it a tad.

Technically it is possible to interpolate an existing font.

Quite many fonts lend to simple interpolation Arial was chosen for simplicity, and clarity of explaining the interpolation. In this case the vertex numberings were a bit out of sync so i had to identify the first corner again. What I basically did is the same thing as MM font does.

Explanation of how it works:

This is how it works. For each vertex and Bezier tangent handle point. Identify counterpart in different weight, find the vector between the point.

You can then add the original point vector plus offset vector times a number between 0-100% to get something between these font weights. It is also possible to go further than the target giving you over interpolation. Animators call the same technology morphs or blend shapes. Not all fonts lend themselves to be worked with to this technology.

One can also be more complex you can make things out of interpolated pieces and then do other constraint based tools such as rounds after merge etc. So if one does this you can make fonts that are interpolated but once flattened nobody else can interpolate them. Same happens if you do manual teaks by inserting points etc.

Current generation of fonts are actually very poor at doing this. Old postscript user fonts could have done nearly any kind of custom building conceivable so fonts were in this regard better years ago. One reason to use EPS files for custom font programs that can then be converted to conventional fonts.

4
Is there a term for adjusting the spacing between WORDS for a font (not letters)?
0
Is there a symbol or way of writing "in between" or "up to" for a year on a timeline graph?