Which PC hardware specifications should a Graphic Designer focus on?

I am new to this forum and am looking for some advice on a PC specification which I will be using to re-skill with Adobe CS6.

I have played about with Adobe in the past as a web designer but I want to become more proficient with the product.

I know the debate about which is better (mac vs pc) is still ongoing but I personally don't want to move to a mac.

I'm wondering which specifications I need to focus on and be aware of, so that I can decide whether my current machine is sufficient, or if I should purchase a new one.

What hardware components should a graphic designer be aware of when sourcing their IT hardware for design purposes?

My current machines specifications are:

Is this beefy enough or do I need to upgrade?

Before thinking of upgrading, I would suggest you evaluate what you're using Photoshop for. Is it for professional reasons? Will having a faster system mean you're making more money by being more efficient? How much are you willing to invest, keeping the above in mind? Telling us your budget will potentially give you better responses as to what you should upgrade.

First off, Photoshop is a memory hog. You want to put in as much RAM as you can - getting more RAM is way cheaper than upgrading your CPU, for instance. So that should be first priority. Photoshop constantly works with a lot of data, and this is stored in the RAM. The RAM is the fastest storage your computer has, so having a lot of space on your RAM is required if you're working with big files. I have 16GB of 1666MHz RAM installed on my system, and still I get out of memory errors sometimes (although I typically have 60-80 tabs open in Chrome + music playing all the time). It depends on what size of files you'll be working with - if you've never saved a Photoshop document as a PSB, or if any of your saved Photoshop documents or TIFF files have never exceeded the 1 or 1.5GB mark, then you don't need more than 16GB - 8GB might do as well. Although, I WOULD suggest upgrading your RAM to 16GB. If you're upgrading, why not upgrade properly? Plus, desktop RAM is dirt cheap.

As @joojaa pointed out in the comment below, make sure you have a 64bit OS AND use the 64 bit version of Photoshop, otherwise there's no point of having that much RAM (although since you already have 4+GB RAM I assume you have a 64bit OS). Also in the performance tab of your preferences in Photoshop, you can set how much percentage of your physical RAM Photoshop can use. I have set mine at 80%, so Photoshop can use a maximum of 12.8 GB RAM, and once it needs more it uses the scratch disk (which is the SSD in my case, more on this below).

Next, in my opinion, comes the scratch disk. You'll find the option to set up your scratch disk in Preferences > Performance. The scratch disk is to Photoshop what a page file is to your system - it acts as the "RAM" when you run out of memory. So, you would benefit a lot from installing an SSD along with your HDD. Installing Photoshop on the SSD will really help as well. I have PHotoshop installed on my SSD and it opens within a second or two.

If you only want to use the system for Photoshop, I would say a 128GB SSD should work. I know people who buy an SSD ONLY to use as the scratch disk for Photoshop.

Believe me, an SSD is the best thing you can buy for your system right now. It will give such a huge boost to your system performance you'll be stunned. If there is just one thing you want to upgrade, I would say add an SSD.

I think the next most important part for a system streamlined to work with Photoshop is the CPU. The CPU handles most of the things on your system. Don't neglect this, even though the RAM and SSD are very important for a nifty Photoshop experience, a slow CPU will bottleneck the performance if you open too many applications at once. If you're a multi tasker, a good CPU will help. Also bear in mind CPUs are expensive, so upgrade this after you're done with your RAM and SSD.

Last, think about the GPU. There are industry-grade GPUs available on the market, which are way more expensive than the consumer level GPUs. I would personally suggest if you don't have to do any serious 3D modelling, skip the industry grade GPUs - the benefit you'll get using Photoshop with these cards doesn't justify the cost in my opinion.

If you do plan on upgrading the GPU, make sure you buy an OpenCL capable GPU. Yes, no CUDA cores required - with CS6 comes the Mercury Engine which uses OpenGL and OpenCL, so an nVidia card with more CUDA cores is not required any more. :)

As for your question on if you NEED to upgrade - well. It depends on how much patience you have. With my previous setup, when I would paint a brush stroke (500px+ radius), it would literally take up to three minutes to register; but I lived with it for quite a long time. My current setup, with 16GB RAM, 256GB SSD, a 770M GPU, and an i7 4700MQ processor, opens Photoshop in a second and everything is lightning fast. I can not even imagine going back to my previous setup now.

Also you have to keep in mind that the system should be BALANCED. 32GB RAM and a 512GB SSD won't help if you don't upgrade your CPU. A killer CPU along with a 32 GB RAM won't help much if you don't upgrade your storage to an SSD. And everything overkill with the same GPU you have right now will still leave you frustrated if you plan on using Photoshop for painting purposes.

My setup is: Core i7 + SSD for OS and Programs + 8Gb Ram + Nvidia GTX580. The SSD gives a big boost to the system, so I recommend it. 8Gb is OK in most cases but sometimes I run out of memory but I have several heavy programs open + over 10 tabs in browser and so on. I would recommend 16Gb if you are like me. Your video is weak. I used to have similar card and to be honest I never had problems with Photoshop, Illustrator. However when it comes to 3D and video editing you need better card. I updated recently to GTX580 which is getting old but it's a very good card. If you want decent performance for a reasonable price just go with the GTX580. They have CUDA which helps a lot in 3D and video rendering. Adobe products are optimized for Nvidia cards with CUDA, so I recommend getting one. This chart might help you with the choice: 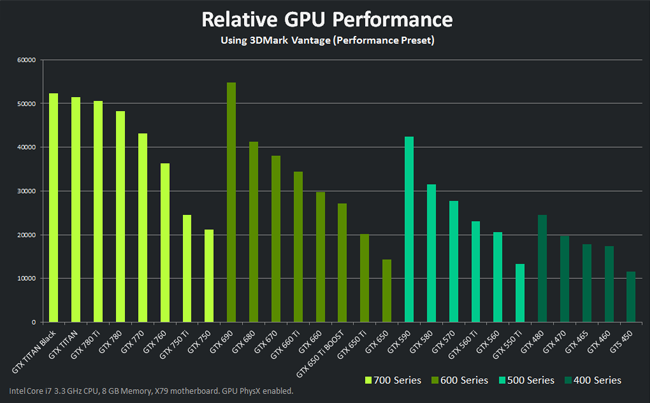 The biggest single gain you can get is a fast SSD. Fast READS and WRITES. This will so significantly reduce loading and boot times you'll wonder what you were doing before.

And it will speed up just about everything else about Adobe's CS package, and everything you do on your computer.

8GB RAM is enough if you're not really using After Effects. After Effects is the only Adobe application that really benefits from huge RAM amounts.

The SSD will improve everything else. DRAMATICALLY.

HD to SSD is night and day.

But get a good one. There's (in some operations) a 5x performance difference between the best and worst SSD.

Not the answer you're looking for? Browse other questions tagged freelance hardware-recommendation or ask your own question.

7
What computer hardware matters to a graphic designer?