How many InDesign points to a milimeter? (and mm to pt)

What's the conversion between InDesign's point measurement (as used in leading and text size etc) and millimetres? What's the pt : mm ratio?

I've seen sources suggesting that a point is 1/72 of an inch, and an inch is 25.4mm, so in theory a point would be 0.3528mm and a millimetre would be 2.8346 pts, but I'd like something authoritative as I might well have gone wrong somewhere there.

one nice feature in basically all of adobe's software is that it can do those conversions for you. You can simply type in any of the unit of measure and it will even do basic math for you too like +2mm 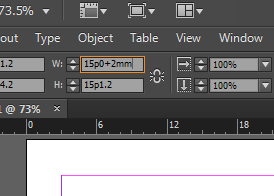 "Points" in typography e.g. in Indesign, Illustrator, Photoshop etc are "PostScript points" and, helpfully, they're a unit Google converts on searches like points to mm or mm to points.

Has to be points or postscript points, not pts or anything involving software names.

In Adobe InDesign (don't know how it is in other adobe softwares) it's a bit more complicated actually BECAUSE OF the accuracy of InDesign's interpretation of decimals.

To test Evan's values I made a simple experiment:

It seems not important, but becomes a problem, when you will need to multiply the values for some reasons. Let's say you have 250 baseline grid lines incrementing by 1 pt, and you need to create a rectangle of exactly the height of those 250 lines.

PS: Or maybe We can just set the InDesign's default accuracy to higher values then three decimal places? If so all that I have written above is bullshit. But I don't know if such accuracy setting is somewhere available in InDesign. Maybe someone know?

Not the answer you're looking for? Browse other questions tagged adobe-indesign measurement or ask your own question.

4
How to set the width of one item based on the width of another item in InDesign?
6
Indesign and syntax highlighting
1
GIMP: find midpoint / arbitrary division between two points
10
How to make millimeters the default measurement unit in Adobe InDesign?
0
InDesign and advert size (PDFs)
2
Is there a difference between the actual ruler and InDesign's inches scale?
1
InDesign Measurements
0
Size of YouTube Subscribe Circle and Video Rectangle
2
How to measure distance in InDesign?