What is this black and white graphical style called? 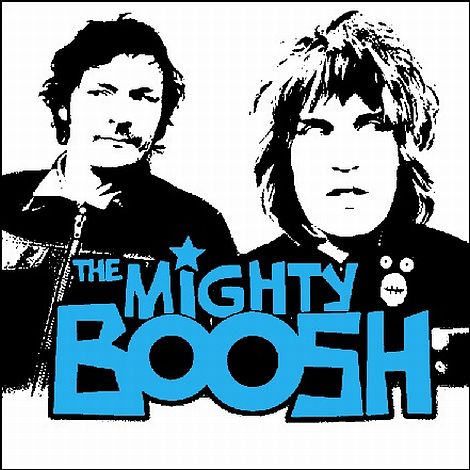 What is this style refereed to as? Image is from a promotion for the show The Mighty Boosh. I keep wanting to call it Banksy but that's not it...

Active Oldest Votes
4
Want to improve this post? Provide detailed answers to this question, including citations and an explanation of why your answer is correct. Answers without enough detail may be edited or deleted.

Forgetting entirely about the lettering for a moment, and just sticking to the photography, this picture represents what you would get with litho film. An extreme contrast film, litho (usually ortho litho these days, or orthochromatic lithography film, which can be used under relatively bright red safe lights) is characterized by large blocks of tone that are either "on" or "off", with essentially no intermediate tones at all; individual grains have a hair-trigger exposure threshold, and development is "contagious", so black areas will bleed together. That film type has been used for halftone offset lithography and serigraphy (silkscreen printing) pre-press repro work for, oh, a hundred years or so, so it predates xerography by just a little bit. This picture represents what you would get using ortho film without a halftone screen (and likely with a bit of additional hand-masking with paint/ink and ferricyanide bleach or something like rubylith appliqués). That technique was used commercially and found its way into a number of schools of art over the years

That said, the effect in this application seems obviously designed to look like late-'70s/early-'80s-era photocopied flyers/'zines. Basically, you had a choice: pay for the Letraset halftone overlay sheet (which was like $20 for a two-pack of letter-size in those days, when $20 was an awful lot of pocket change) so you could get a reasonable-looking continuous-tone image, or just run a photo through a photocopier, adjust the contrast, modify with marker and correction fluid, rinse and repeat until you got a useful "master" (under a dollar, especially if you could do it at school without getting caught). (The real work was in hand-colouring the blue lettering with Hi-Liters.) So Lauren's offhand comment is really the right answer.

Doesn't really have one yet I think, " Street Art Stenciling " seems to be the closest - If you can get the UK channel 4od check - http://www.channel4.com/programmes/graffiti-wars/4od - and the documentary "Exit through the Gift Shop" which were on a couple of days ago, both covering the artists who do a similar style to the one above.

It can be referred as duotone art.

heavy blocks of text are pretty indicative of modernism from the swiss movement and the stripped down graphic is dadaism, and since both of those styles are heavily appropriated here, i'd call it post-modern. well more pastiche than anything else. but yea. post-modernism.

BrianCBrianC
63055 silver badges1414 bronze badges
Add a comment  |
0
Want to improve this post? Provide detailed answers to this question, including citations and an explanation of why your answer is correct. Answers without enough detail may be edited or deleted.

Not the answer you're looking for? Browse other questions tagged style style-identification or ask your own question.