When should someone use ligatures?

What decisions and factors should be considered to determine when to use ligatures? Only in headings? Only in body? Purely by eye?

I ask because about seven people looked over a poster design and liked it. One noticed, "hey Ryan, the f and i in identification are so close the dot is missing." Now, after being pointed out, others think its an error as well. I had to explain what a ligature was, and that it wasn't a mistake.

The font is Futura:

When, if ever, should someone use ligatures?

There are two types of ligatures.

Type 1: The reason ligatures exist is to prevent spaces between some letters which could disturb your reading flow. For example in some fonts "fi" overlap each other or especialy "fl". In order to find a solution for this problem, ligatures were invented, each becoming just one letter on the typeblock:

You can see that the normal letters are too close so you'd have to extend the overall spacing.

Type 2: Over time type designers used ligatures to "fancy-up" their font by adding special ligatures to the font which enhance the character of the font but not always legibility.

Super extended Ligatures from the Sauna font by Underware which uses ligatures to create a more "Script feel".

To get back to your example. In Futura the "fi" isn't overlapping so you don't have to use the ligature (I guess this is a special Futura since the original don't have ligatures?).

But if you want to add a special taste to your font, use ligatures as you like. But be aware that if you use unusual ligatures people will notice and it will potentially distract them from the actual design statement.

No One Rule Fits All Situations

This is all somewhat complicated, because it ties in with kerning support and font selection, and there is no one-size-fits-all answer that will serve for all situations. In my experience, ligatures are more apt to be needed in a tightly set serif roman or italic, not so much in a sans font.

The first answer above discusses the current question at length; the second has contrasting specimina of certain ligatures in five very different faces.

If push comes to shove, a reasonable general rule is:

That’s as general as I dare put things, but unfortunately, it won’t always work.

All that said, there certainly are occasions when you want more or less ligaturing than the font by default provides if you just let it do so on autopilot.

For example, if you are attempting to faithfully reproduce a very old document typeset with historical ligatures like ﬅ and such in them, then you will want to put those there even if the font doesn’t do that by default.

However, as Bringhurst observes, the font designer may not have done a historically accurate job when classifying ligatures as standard or historical. See my first referenced answer above for some discussion of this.

Here is a set of ligatures from Robert Slimbach’s Arno Pro at its Regular weight. (The first pair of glyphs on the first line don’t count, and only the last line’s first one does.) 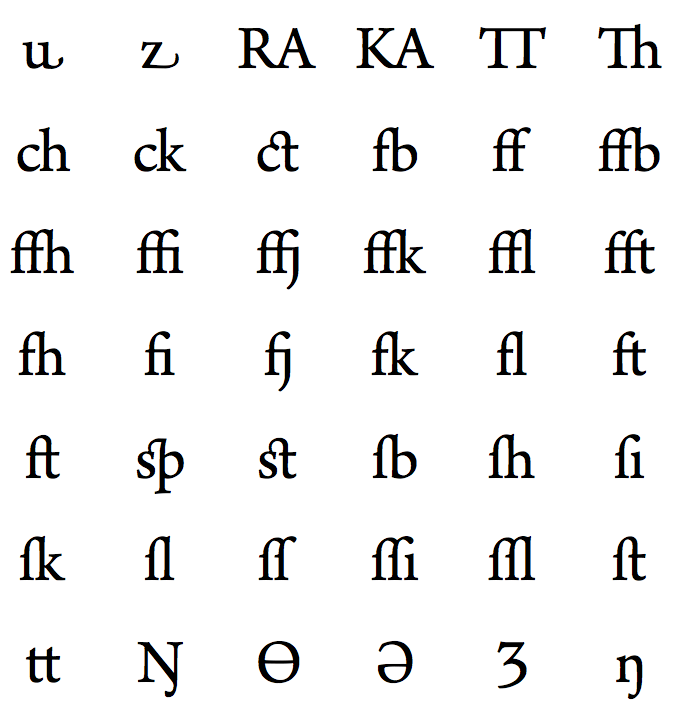 As you see, some of those, especially the first two, are actually there to take the place of explicit kerning rules about those pairs. So to some extent, it depends on how tightly you are setting your type, and at what size. You would not use them on letter-spaced capitals, for example, and perhaps not when hand-setting a larger header with custom kerning. This is a matter of taste, not rule-books, and the sensitive designer will need to exercise tasteful judgment for these, just as in so many other places.

One warning about a trend in modern OpenType fonts is in order here. Bringhurst complains that font designers are placing (for example) Th in the standard ligature set instead of the historical one like ct, so you may need to disable or enable these explicitly, or choose the appropriate glyph from the font set yourself.

The lesson is that letting these things chug along on full autopilot is seldom a good idea for achieving optimal results.

In contrast, especially when setting in a script face but sometimes also in a true italic face (meaning rather than an oblique face masquerading as an italic, and preferably one with swash caps instead of merely oblique romans), the conscientious font designer will provide a variety of possible ligatures for the typesetter to select from. Some of these will be automatic, while others require one’s own judgment in setting.

Because a script face is essentially a calligraphic type face, it will consequently have complex rules built into the font tables for joining up adjacent glyphs.

I won’t bother displaying Hermann Zapf’s masterful Zapfino, not only because its calligraphy is too obvious an example, but also because there are simply too many ligatures there not to overwhelm the casual reader. So here instead is a sample of some of the optional ligatures from Richard Lipton’s Bickham Script Pro: 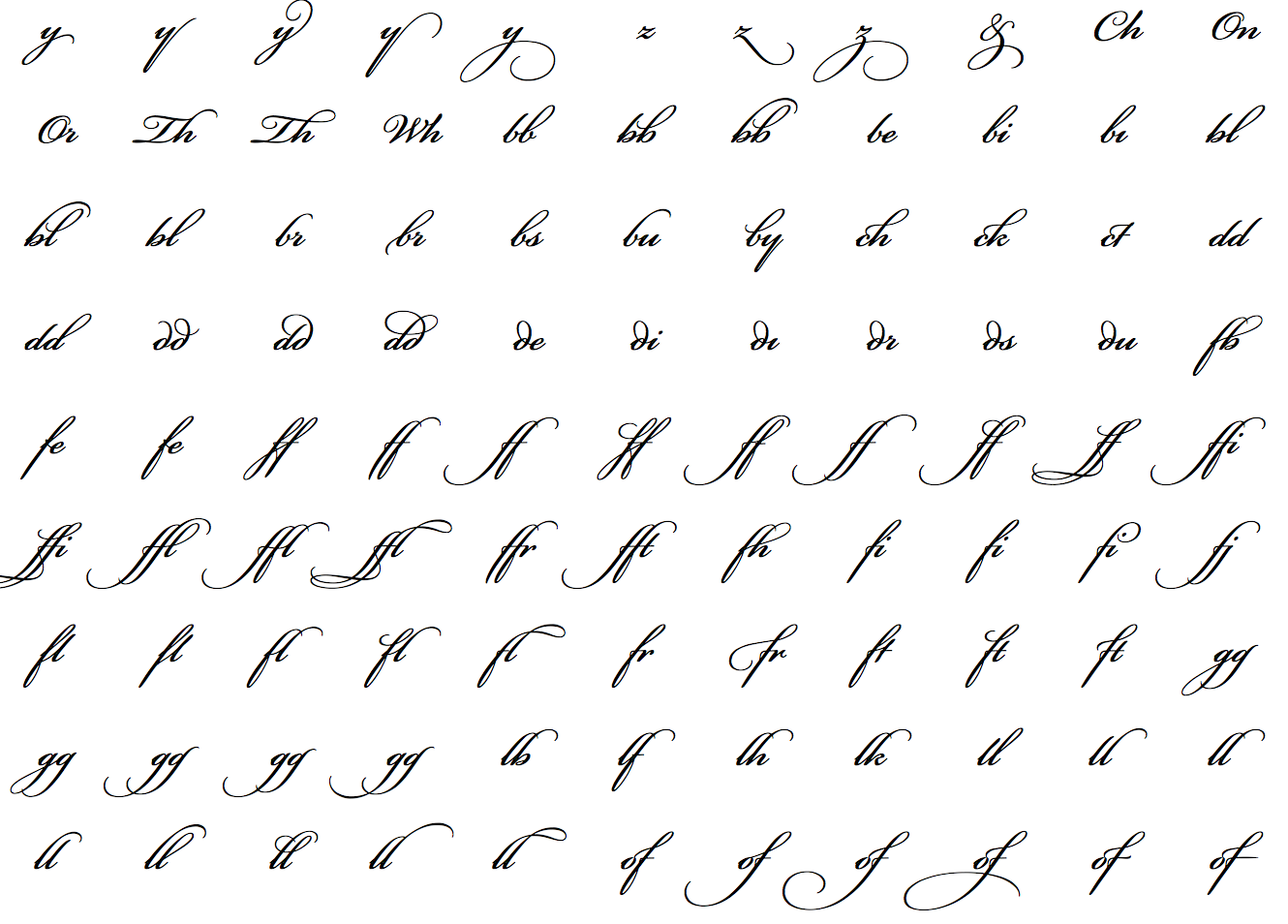 Setting Greek is of course completely different. Particularly in a chancery Greek, you may want to make use of the many ligatures available in a good chancery Greek face. For example, here are some from George Douros’s Alexander: 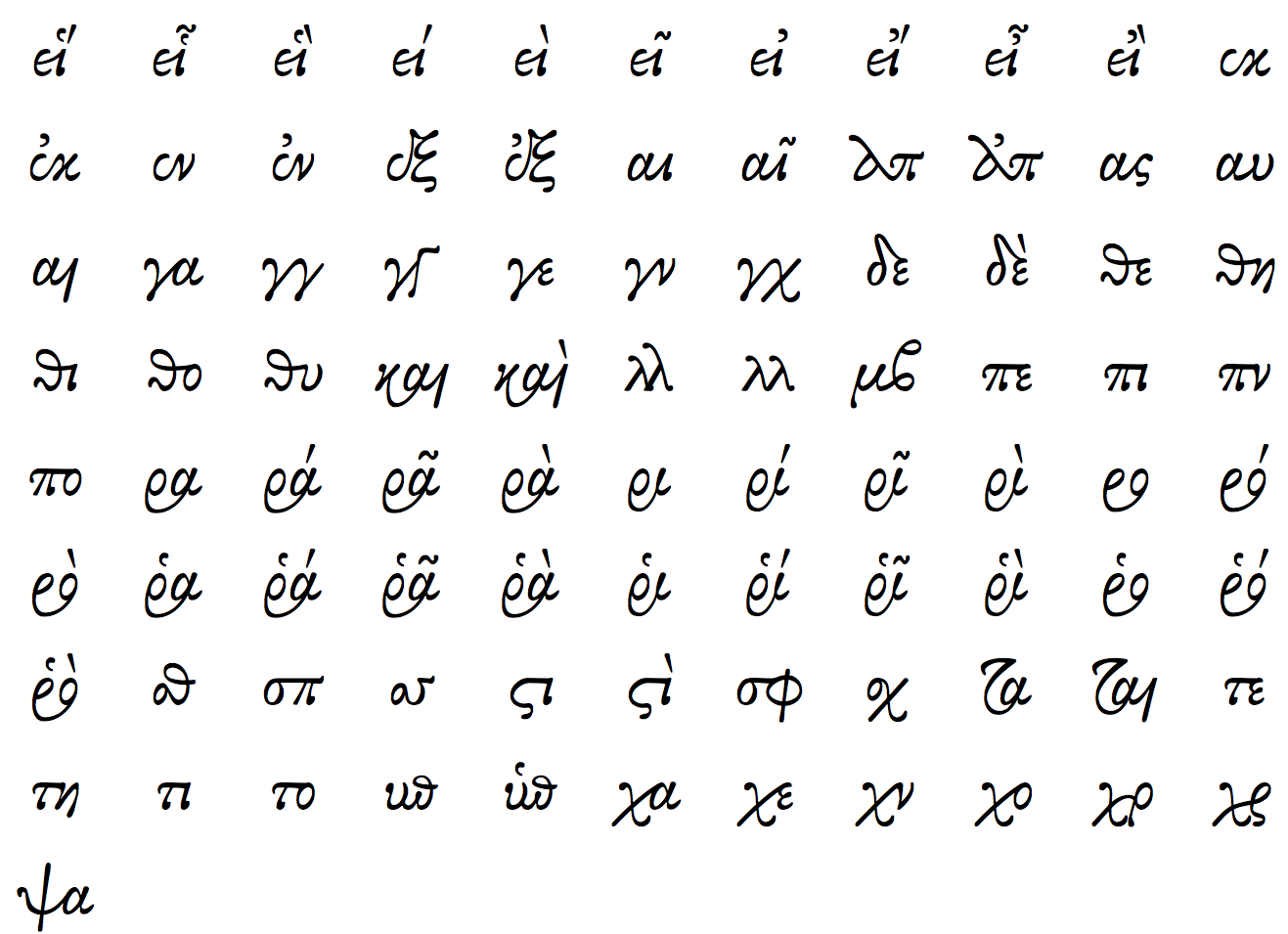 It looks like your electronic version of Paul Renner’s original Futura font’s default ligature rules are generating a ligature for fi no matter whether one is needed or not. Understanding that this is only my opinion, it seems to me a bit of an affectation at large display sizes, particularly given that the f in that face isn’t going to clobber an i immediately following.

It is likely included because most sets have at least fi, fl, ff ligatures to keep the hysterical porpoises at bay — by which I mean that the Unicode code points for these exist only for lossless round-tripping in converting between Unicode and legacy encodings:

Those code points shouldn’t be needed at all — ever.

The Unicode FAQ on Ligatures and Digraphs says this about ligatures:

In many fonts designed for readable body text, ligatures tend to be subtle tweaks that are barely noticeable, just fixing what would otherwise be an awkward placement of adjacent letter shapes.

The Futura fi ligature in your example, however, isn't really like that — it stands out quite prominently, and is arguably unnecessary, in that the un-ligated f and i letter shapes fit together quite comfortably without overlap.

It does, however, clearly echo the geometric design of the font, and would look very nice in a logo, even if it might appear jarring in body text.1 As such, it might be best treated more like a "custom flourish" — albeit one that just happens to be built into the font itself — than a more conventional "readability ligature".

As such, you could just explain that the "funny f" combining with the dot of the i is a deliberate design choice to make the text look nicer and more geometrically clean. You don't necessarily need to explain what a ligature is — if your clients happen to leave with the impression that you altered the letter shapes yourself, where's the harm in that?

1) IMO, for small type, Futura is a somewhat borderline font choice anyway; it can work, and I've used it like that myself, but it's best used carefully and with an eye towards possible readability issues. For long paragraphs of text, there are other geometric sans fonts that can sacrifice a bit of design purity for improved readability at small sizes.

Not the answer you're looking for? Browse other questions tagged typography best-practice ligatures or ask your own question.

13
Do discretionary ligatures hold any other purpose than visual?
2
When designing in the browser how would someone use kerning?
3
When should I use a condensed font?
0
Photoshop not recognizing ligatures in Baskerville
7
A font with custom ligatures (for music)?
0
A narrow font with coding ligatures?
3
Are Th ligatures used in German typesetting?