How to visualise two-dimensional scientific data-points in a chart… in grayscale?

I am not sure whether this is the correct site for this question. The model comes from Physics, the data comes from computational physics, the plot is made with LaTeX but my question is about the presentation and layout of it all.

You can click on all images to get a vector PDF.

I have data points that depend on two parameters, so I have made a 3D plot with them:

I think that this gives a good impression that the data falls off for small “a” and that there is a bump for moderate size “sigma”. However, you cannot really read any numbers off this. I need that, though.

So I put all the data into a two dimensional plot, encoding the “sigma” with a color. Since the data points overlap, I find it helpful to connect them with lines like so:

To me, the above version is the most readable version of them all. The connecting lines between the points are not really justifiable from a scientific perspective, since I cannot assume that they describe the Physics there well. The only things that can have some meanings are the interpolated lines that I have dotted in the above version.

It would be more scientific to have it like this, without connecting line segments:

Even with the color, it is harder to follow the points of each color. The first version shows me right away that the points drop down for small “a”. With the second one, it can be seen, but only if you look at it closely.

Maybe I can use dotted line to help the eye of the reader, but not implying anything, like so:

Also, I would like to avoid using color. This will be printed a couple of times and color pages are tenfold in price compared to grayscale pages. I have tried to split up the data in the middle, such that they do not intersect any more. This is the second half of the data, the small “sigma” ones. I added the unscientific line segments and have the legend ordered from top to bottom:

I think this is readable, except for the connecting line segments. Splitting up the data in multiple plots makes each plot easier to read, but it is harder to compare the data.

Without the line segments, I need different markers for each data set to keep them apart. This yields cluttered plots right away, so I made the less important data sets a little lighter.

This has no line segments and does not use color, but I do not think that it is easy to see what is going on.

What could I do to get the data shown in a readable way?

When working with items which all must be 100% and the same color I look at the things which make the items distinctive:

Then it's a matter of how I can adjust these four settings to create enough distinction between items so they are visibly different. 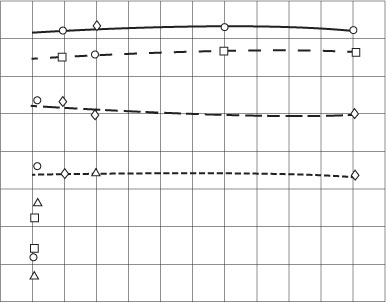 The varying of dashes on the paths will do well to create distinction between those items. It could probably be refined a bit more than it it above. However, that seems like a fruitful path to take for those items.

The indicators are still unclear. I played with using some filled and some hollow but nothing was allowing for clear distinction between the square, diamond, and triangle. They are all too similar in shape. So.... I eliminated some shapes in favor of varying fills. 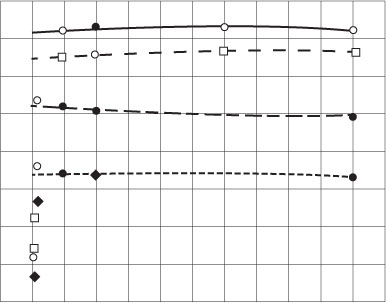 I removed the triangles because they were the most confusing shape and easily misread. Replaced them with a filled circle. I also altered the diamonds so they are filled rather than hollow.

There's still a bit of confusion between the diamond and filled circle.. So, I start thinking of what shape would work and be less like the others. Hexagon - too similar to circle, Triangle - as stated, too similar to square and at a small size, not clearly distinctive from circle. A star perhaps? Yes, but perhaps too decorative.

Eventually I settled on the most minimal route, a filled square. 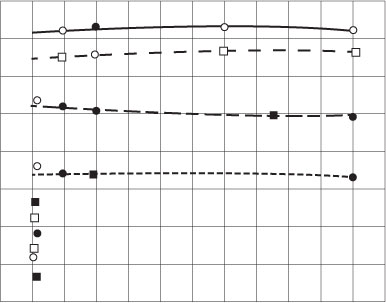 The varying plots of the other image is a challenge. Altering the path dashes would still separate them from each other well. However, the overlapping of the plots may present an issue. It would be difficult to plot multiple paths on the same point and not have them look like one path, especially without color. In this case, if possible, I may explore tints as well as dashes. Making each plot a percentage of black. Therefore when they overlap, the black becomes solid where dashes overlap. This may allow some visual distinction for the overlapping plats. To be honest, I would need to explore this further (if tinting is an option) before I'd know for certain.

This is not a trivial problem; I am only going to give some general suggestions. My graphics are conceptional, would need some elegantifying to be optimal.

First: kudos for making the mesh in the background light-light grey. People often overdo that.

Do not underestimate the use of a few different diagrams to demonstrate the same data! When people drill down into information visualisations, you cannot be entirely sure about exactly what they are looking for, so doing two-three might well be the best solution.

Of course; colour is in many instances the easiest way, I am going to play with some different solutions. First, your colours are not really high-contrast, and the blues and greens are particularly similar. I found nine high-contrast colours by using ColorBrewer, a tool particularly developed for maps, and I selected the print-friendly option. Cartographers have struggled with this for centuries. The colours might not be very pretty, but that is not really the point:

This would give you a graph roughly around this: 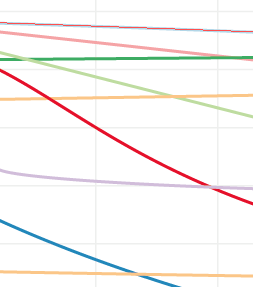 I would also suggest that adding an extra legend, at the end of your graphs. It makes it easier to remember the placement and have the added effect of showing where the graphs end, and putting the "name" of each graph closer to context, and how they cross each other at the end (how they merge/group, and which ones goes up and down at the end. If this is of interest). Do keep the "original" legend too, preferably somewhere to the left. Again, a subtle help in mental mapping (please do not follow my example in the box-legend, as the colours there are not really in a sensible order). 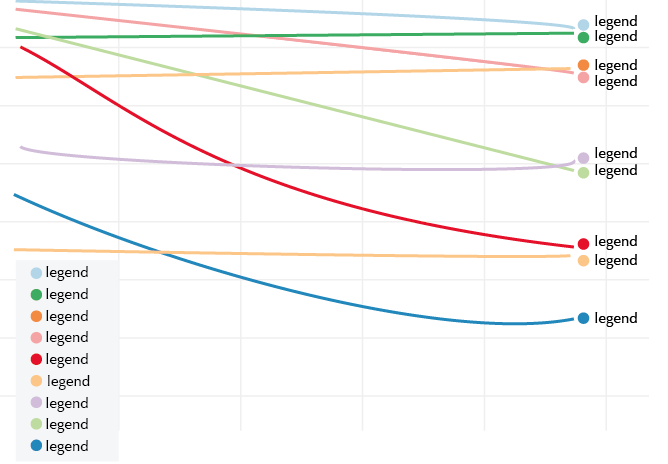 So. This is the overview of the data. What to do with the digging-down into details? I am a fan of small multiples. We are pattern-finding machines, and only need a little help. I would put the "big" graph in the beginning of the relevant document, and then I would repeat the shape with the relevant data; with comments. Something like this, perhaps: 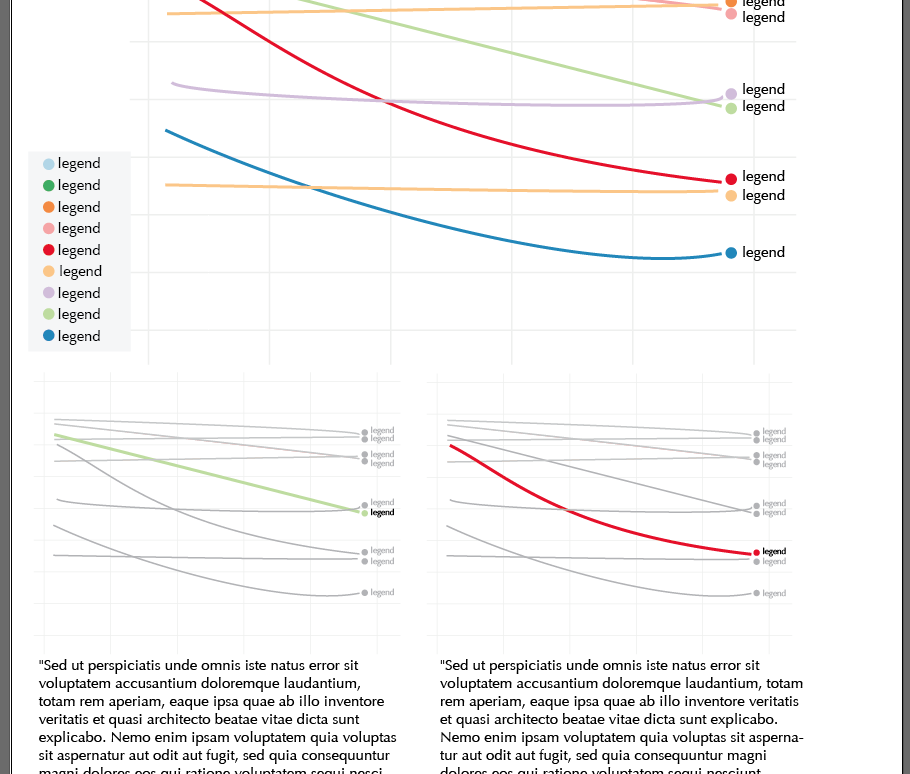 An example of use of small multiples, are Pathline:

...a visualization tool for comparative functional genomics that supports analysis of three types of biological data at once. 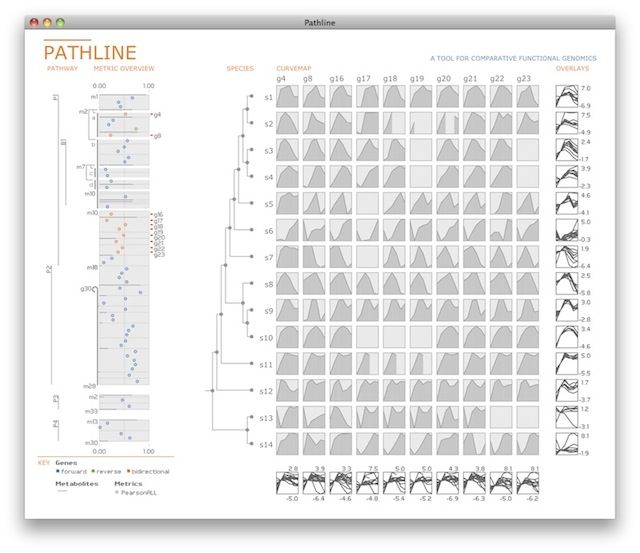 Scince you are concerned - and rightly so - about the truthfulness of the graph-lines in what is basically a scatterplot, you could tone the lines down, to just suggest. For example by making each datapoint a "train-stations" or bulls-eyes. thus:

This will also work in grayscale. You can of course combine this with Scotts suggestions of different shapes.

Scott has covered the basic idea of grayscale, and you can take that further to also use the small multiples. He has covered the general idea: you have shape, direction, density, stroke, contrast and placement.

What to do when the strokes go madly with overlap, as per your images 2, 4, 5?

For example this, colour and greyscale: 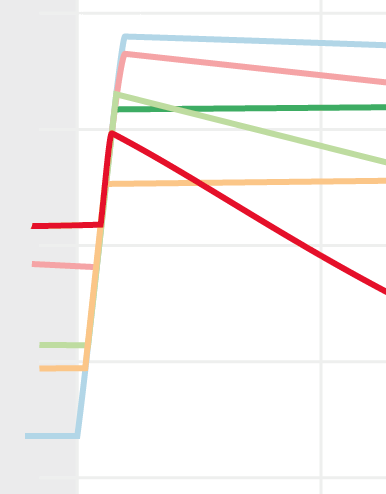 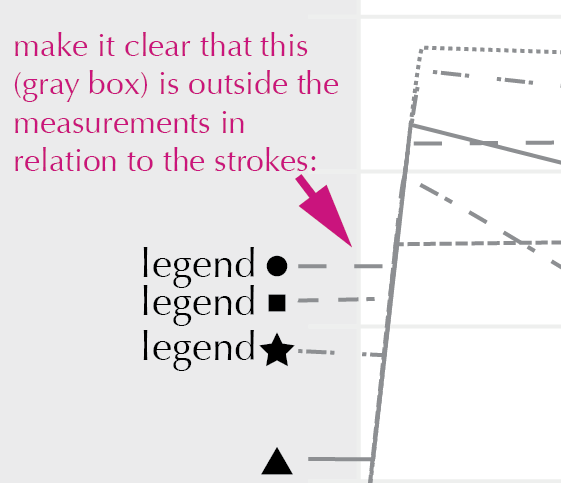 To conclude. The most important rule is to not 3D-ify two-dimensional data (I will come and poop in your mailbox).

It is also worth mentioning that very smart people have struggled, and found solutions to, complex visualisations. Here you will find a list of digital tools that might well be useful. Plot in your data; generate numerous versions.

Let me know if I have forgotten to address something.

Not the answer you're looking for? Browse other questions tagged information-design diagram critique data-visualisation chart-design or ask your own question.

3
Can I store separate grayscale versions of images in a colored pdf?
2
Best plotting symbols for scientific plots with multiple datasets

4
Create and Edit parallel “bus” lines in Inkscape
1
How to create a uniformly distributed dashed plot in a scatter graph in Adobe Illustrator CS4
16
How to make plot marker sizes for scientific plots seem consistent?
2
Best plotting symbols for scientific plots with multiple datasets
1
Color scheme for many options
4
Improving readability of evolutionary algorithm results
0
Should I accept my own redesign?
3
Show legend AND percentages in Illustrator pie chart
1
How to show multiple years of line data for comparison
1
Properly display multi-line chart when series overlap