I draw pencil sketches on paper and "ink" them using a variety of pens. (I'm using the term "inking" very loosely here to describe the process of drawing the final lines over a pencil sketch, no matter whether actual ink is used - in my case, I use a variety of felt-tip pens and Indian Ink.)

Of course, the final ink lines will never match the pencil lines 100%. There will be deviations and additions all the time: 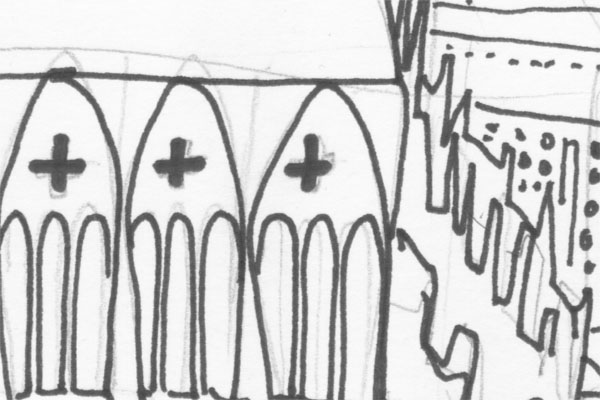 To get rid of the pencil lines, one would usually use an eraser before scanning.

However, with some papers and inking materials, this tends to damage the canvas and/or the final lines, no matter how carefully you use the eraser. Also, it's a lot of work.

Is there a clever generic digital method to get rid of the pencilled lines without touching the final lines?

Merely playing with contrast and brightness doesn't produce good results, as it will destroy or alter details of the final lines as well.

I can use a very recent Photoshop (CS5.5 to be exact, but the more generic the advice, the better.)

Lollero's suggestion is a good one. It doesn't help much if everything's gray and black, however.

Here is a technique that takes a little finesse and some practice, but is your best general approach without changing your initial workflow:

At this point, you can tweak the Levels adjustment layer as needed, and you can fine-tune the mask by brushing with white to reveal part of the layer or black to hide. Tweaking the mask is where a Wacom tablet becomes almost a necessity.

The advantages of this technique are that you never mess with your original pixels, so you can always step back and try again if something doesn't work out quite right. With a bit of practice you'll be able to clean up any drawing very rapidly.

Without resorting to much trickery I would use colored pencil for the sketching.

Lets say you'd use for example a blue pencil for sketching and your regular black ink for line work.

Then you can use (top menu)

And slide the Blues and/or Cyans sliders high enough and you can get rid of the blue sketch lines really easily.

You can also try and change your sketch lines to color lines and then doing the same thing.

( Note that this is asuming that your line work is dark enough.. or that you can make it dark enough without ruining it. )

( Point being that you cant colorize Black )

You can change the color with (top menu)

After that you could try the way above this one.

For the best results.. I would say, buy drawing tablet and put sketch and lineart in different layers.

There is no way automated digital way to completely eliminate the pencil lines without doing some damage to the quality of the ink lines. However, it is possible to get close—probably close enough that you could manually fix the problems in a few minutes using a graphics tablet.

Looking at the sample image, it appears that there are two characteristics that could allow a computer to differentiate the pencil from the ink. First, the pencil lines are mostly a lighter shade of grey. Second, the pencil lines are thinner. In signal/image processing terms (what Photoshop effects are really doing behind the scenes), these properties correspond to amplitude and frequency.

Your original approach (using brightness and contrast settings) only took into account the first property. By picking the one that works best, or combining both, it is possible to get a fairly good result that only requires minimal touch-up.

'Lightness' of the Line (Amplitude)

The histogram of the image shows us the relative number of pixels at each brightness level (shades of grey). In the figure below I have labeled some of the features on the histogram of your example image. The pull-out below the histogram is a black-and-white (binary) image showing all the pixels that have brightness levels in the indicated region on the histogram. This mostly corresponds to the pencil lines, but as you can see, it also contains part of the soft edge of the ink lines. When I remove all the pixels with brightness levels in that region, I get the image on the left. As you can see, most of the pencil is gone, but now the edges of the ink lines look a little rough. If I had moved the threshold (cut-off point on the histogram) further to the left, it would have gotten rid of more of the very light pencil markings, but it would have also degraded the ink lines even more. 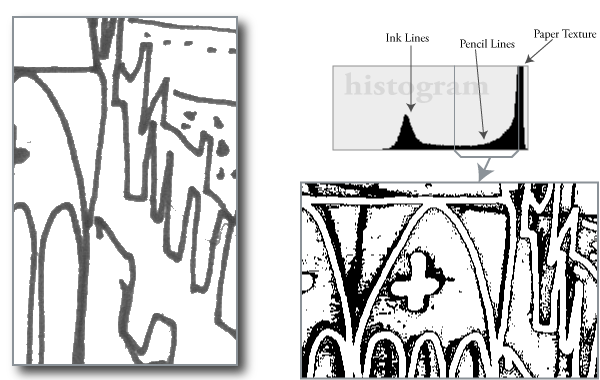 'Thinness' of the Line (Frequency)

Manipulating the frequency content of an image is done all the time in graphics editing, but relatively few people realize what they are doing, because Photoshop hides all the technical details behind what they call a blur filter.

If I apply a Gaussian Blur filter to your image (using a radius of 2 px) and then apply a levels adjustment, I get the image in the figure below. As you can see, the resulting lines are mostly free of pencil markings, but they are thicker and have less detail than your original ink lines. That is what a blur filter does: it removes detail. This is useful to you because thin lines = higher level of detail and your pencil lines are usually thinner than your ink lines. 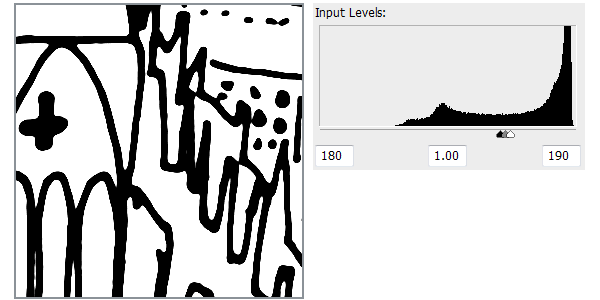 Every image is different, and the only way to figure out what will work best is to experiment. When I played around with your example image, I seemed to get better results from the second (blur) method. However, I suspect that given enough time, the best results would come from some combination of the two. I will end with a figure showing a sequence of image adjustments that gave me fairly good results after a few minutes, but that could use more fine-tuning. 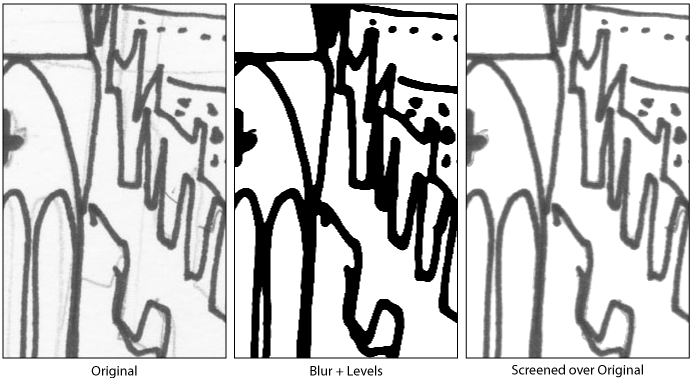 Not the answer you're looking for? Browse other questions tagged adobe-photoshop illustration scanning comics or ask your own question.

5
What are my options for gallery-quality prints of digital artwork?
1
Which manufacturers are producing mid-level and high-end artwork scanners?
1
Budget workflows for transforming pencil design into professional looking digital image
2
Detecting Spot Colors
5
Best way (efficient and nice output) and best software to ink comics digitally
3
Scanning colored pencil illustrations and prepare them for printing?
2
Creating a Selection in Photoshop with no Feathering or Anti-aliasing
3
Printing Pure Cyan from Epson Inkjet Printer