How much alteration to a font constitutes a new variation?

I have been looking at many of the questions asked about similar fonts or alternate fonts that can be used in place of a more expensive or popular one. One of the interesting things to look at is when you overlay one set of font over another and seeing where the differences are.

I was wondering if there is some guidelines or standards (even consensus) among people working in the area of typography of just how much change is needed for a new font to be recognized as such. I realize this might be a very ambiguous question, but what I was thinking of are in terms of:

I think it is difficult to establish some of these criteria for fonts that are a hybrid of a number of different fonts, but the criteria can still be applied for each of the fonts that it borrows from to ensure that it is not just a simple mix and match of different existing fonts to create a new font.

I don't know that there's a good consensus for what exactly constitutes a "new work" any within creative field. Obviously, there some clear lines (like straight copying of elements, etc.), but typography raises an interesting problem in that there are only so many variations on the basic form of each letter. For example, there are alternate (two story) versions of the lowercase letters G and A, as well as numerous ligature variation.

Other variations center around the proportions of the letterform. Most alphabets are quite flexible when it comes to modifying character shape: a quick image search will show the variety possible. These considerations can significantly alter the resulting typeface's tone and legibility. OpenDyslexic is a good example of what modifying a letterform can do.

What one person considers a ripoff another could easily consider a poorly done tribute or redraw. (See the issue of Helvetica vs. Arial for an example of that).

Not to be that guy who is super precise: each and every imaginable variation, regardless of how small the change was, would technically constitute a new font, but I think you're asking about typefaces. See AIGA's They're Not Fonts for a bit more on the difference and why it's very relevant here (it really is, though).

As far the specific font properties you describe (position, slant, width, style of numbers, letters, symbols, and various cases), those have formal definitions that fit within a typeface family.

For example, consider the superfamily Univers. 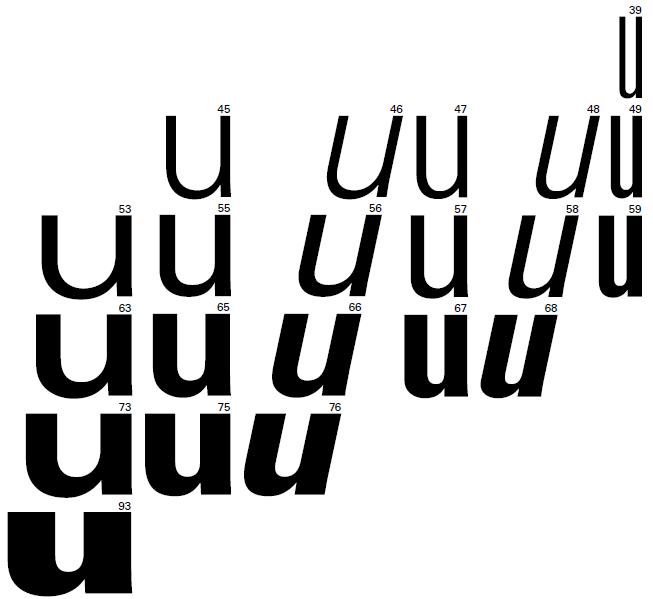 As you can see, there are many variations of character width, stroke thickness, slant, and stroke angle — however, each of these variations are considered a single typeface. Thickness is often defined on a scale from ultra thin to ultra black, angle be described with terms like italic (though italic is more than just angle) and oblique, width can be ultra condensed to ultra wide.

Additionally, type families can include variations such as small caps, monospace, cursive, even scientific or mathematical (often containing many specialized symbols for equations or technical diagrams that wouldn't make sense for every day use).

To get a better understanding of how fonts and typefaces fit together and what constitutes a new one of each, I would highly recommend reading Ellen Lupton's book Thinking With Type — the freely available companion website is also a fantastic resource and doesn't require a payment to Amazon et. al.

Bringing all of that back around to answer your question: any of the variations that would fall under under a family or superfamily should be considered part of the original family. An example: you create an extended symbol set and lining figures for the Fanwood typeface. You have simply added to the original family and your additions might be best considered "Fanwood Scientific," "Fanwood Technical," or even "Fanwood Numeric" — they are, however, part of a new font.

However, say you were to find an old manuscript that you wanted to use as the basis for a new typeface, (provided it wasn't a known face already) you could feasibly redraw the letterforms, optimize them for a specific display case such as screen, and consider it a new typeface. Obviously, the ethical thing to do there would be to cite the source of inspiration or reference, but it could be (keeping in mind that "new work" is a fuzzy term) considered to be a new and distinct typeface.

The only thing required to make a font 'a new font' is to do a SAVE AS... and give it a new file name.

Technically, that is now a new font file.

In terms of design of the font, there are no rules what-so-ever.

Some foundries sell the exact same design as different names (with permission and licensing). They are different fonts. But the same exact design.

Sometimes someone does a 'revival' where they take a historic face, give it some slight tweaks, and then market it as a new font.

And sometimes, unscrupulous people just literally copy the design of a font and slap a new name on it.

I am surprised no one has mentioned this, as it is at the definitional centre of the question: legally speaking (almost everywhere) typeface designs cannot be trademarked, only their names. Fonts on the other hand, are considered software, and can be trademarked, patented, etc. This means the digital file: the vector outlines that make up the letters. No matter how similar two fonts appear, these outlines always have a unique digital fingerprint—something that saving with new name won't erase. But you can print out every glyph, trace them by hand, rescan and compile: that would be perfectly legal.

One notable exception are those typefaces which were never trademarked when they were digitised and published as fonts. Palatino is a perfect example: only the name, not the outlines was trademarked. Meaning that in those cases, one can legally save them with new names and even charge for it!

To answer this question we should stress the fact that every font is a collection of multiple objects and not a single object based unity. From this point we can understand that every change in every symbol is a variation, and the range of variations begins from slight subtle changes to very prominent significant changes until creation of the collection with own recognisable appearance/look.

There is no answer to "how much alterations..", more important WHAT was altered/changed OR/AND newly-introduced... in terms of quality and not in terms of quantity.

Most of the fonts have some special features - original serifs, ligatures etc and if someone affects part of them - variation is created. Again, it is more important what the change is and not how many changes performed. If someone introduces a new particular permanent feature to the entire font in a way that most of the people will differentiate them - we can state that the new font can fly on its own, in terms of similarity. If some feature appears only on some particular font and someone introduce new features leaving this unique one without change- the new font is probably a variation, and not a "unique font".

The question is a general one, so the answer is general. If we had an example we could vote in some direction, but only the court (which should be objective) can decide if there is copyright infringement based on many opinions from the specialists.

1
What process do you go through when creating a typeface to make sure that it is not too similar to something that already exists?

5
Creating a font for a new language
3
How to upload my new font?
12
How to design the letter ß (eszett or sharp S)
3
Generating font files from SVG files
6
Closest Google Font to Amazon's new "Amazon Ember" font?
0
How much different has a font to be?
6
What methods exist for determining if a font is similar or derivative work?
4
How do you create alternate font glyphs/characters?