Illustrator: Border effect for a path

I'd like to surround a path with a border (see the third illustration below). However, I cannot get it done without using Path -> Outline stroke. This is very inconvenient, as Outline stroke replaces the original path with a new, much more complicated one, and it becomes much harder to edit the path later.

I thought that maybe some border effect exists that I don't know of. Something like Outer glow (see the second illustration), but solid rather than a gradient. Is there such an effect? 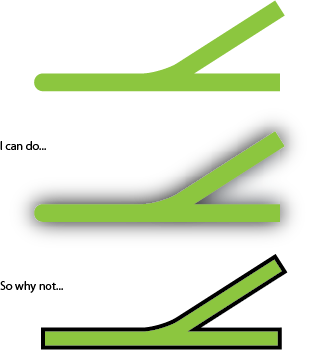 I found it! It's actually very simple:

Copy your original path. Lock it.

Turn your copy into outlines. Unlock all.

Group the outline and the original.

It's a bit quick-and-dirty, and if you make changes you have to redo this sequence, but it preserves the editing capabilities you want.

This answer shows you how to use sub-layers inside your outline layer. This way you can acchieve the result @Lauren Ipsum is describing but with

You can add more stroke in Appearance from Window/Appearance. Then Use the Stroke panel in Window/Stroke to Align Stroke to outside.

1
Illustrator: Snap at some distance from existing objects