How do I get Adobe InDesign CS6 to export high quality PNGs?

I am having trouble exporting PNGs from Adobe Indesign. The problem is they become very pixelated once they have been exported to PNG. However, when I export to JPEG, there is no pixelation, they look perfect! Has anyone else had this problem?

I need to export them as PNGs because some pages have transparency effects, which JPEG doesn't support.

Is this a bug in Adobe InDesign CS6? Is it a configuration option that I can change?

Below I have provided sample screenshots of the JPEG and PNG files, along with the export settings I used.

Any help would be greatly appreciated. Thanks! 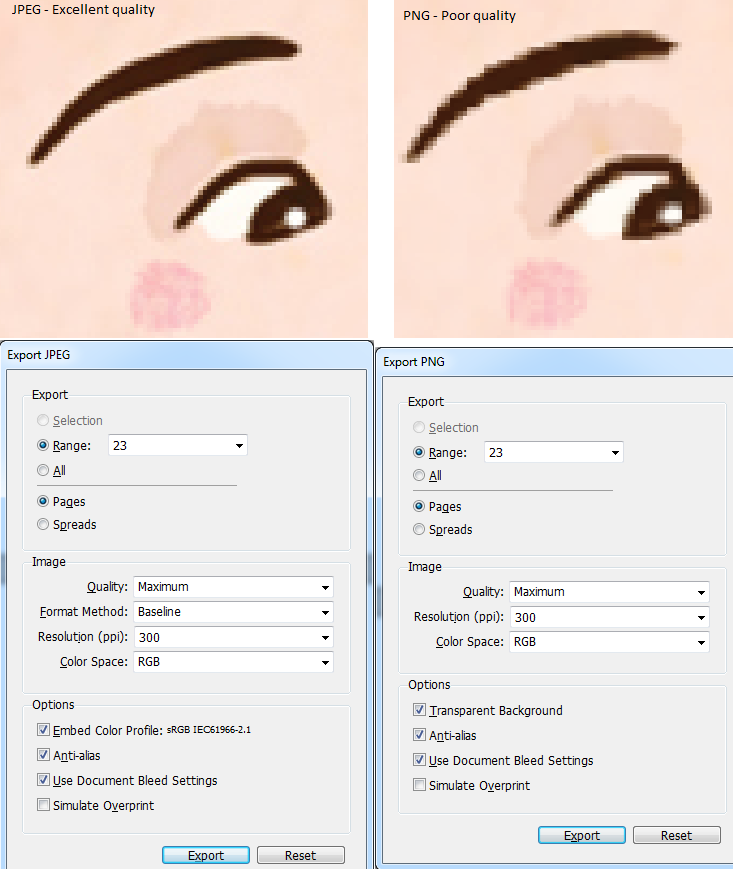 EDIT: I reproduced the problem with a brand new project. I have zipped the project files and uploaded them here. As you can see, the same problem with PNGs exists:

If anyone is able to generate a non-pixelated PNG from this sample InDesign project, please let me know how you did it.

Coming to this a little late, but I found the problem to be replicable on all machines I have running any version of InDesign from CS6 onwards. It occurs when a graphic containing an alpha channel ("transparency" in the case of PNG, or the existence of any layer other than "background" for PSD) is displayed in InDesign at a size other than 100% (the image, not the boundary) and/or at a DPI/PPI different to that of the document, and is exported either as a PNG or PDF. It seems it switches to a different resampling algorythm for high quality output, but messes up somewhere giving this awful jaggy nonsense.

To prevent issues, I take two different approaches. For images that require no transparency, such as a screenshots or photos, I just make sure the linked file is flattened. For bitmapped art that does require a transparency, I just command+C copy the figure in the "scale" box, edit the original in Photoshop, put all layers into a Smart Object, edit Image Size to increase/decrease by the percentage I just copied, and then if needed, edit Image Size again to rescale to 72ppi (assuming it's for web). Hit save, and InDesign updates the image in its place, so no further editing is required. Occasionally, it's a fraction of a percentage above or below 100%, so double check and set to 100% if necessary.

None of this should be necessary, and it's frankly disturbing that Adobe have let this go for several versions now.

I had the same problem exporting to a JPG. The only solution I found was this:

(2) open the PDF in Adobe Acrobat

This is a pretty strange work-around but the only thing I could do to get what I needed. I don't know how much additional loss was introduced through this but the final image looks "ok".

I'm unable to reproduce this difference after trying with a number of layouts that include transparency effects and various kinds of linked vector and raster images.

you could export as a high res PDF, and then change it into a png in Photoshop. it'd stay high quality and have the transparency.

Not the answer you're looking for? Browse other questions tagged adobe-indesign cs6 png or ask your own question.

2
Uploaded pdfs are blurry on LinkedIn profile page
6
Why do some, but not all, PNG files (with transparency) in InDesign documents have black borders?
0
InDesign/Powerpoint to JPEG for 50" widescreen monitor viewing
0
How to resize icons from the noun project without losing quality
1
PNG images from Illustrator have a pixelated border in InDesign
2
Exclude selected images from compression on PDF export from inDesign
0
InDesign export problem: identical PDFs from same InDesign file have very different output file sizes
0
Instagram blurrying my designed posts