I'm currently creating a multi-language "Mountain Rescue Casualty Card". It's basically a card (a4paper front and back) which tells the first aid rescuer where someone is hurt after an accident.

Now my version is based upon a few previous versions. But the problem lies in the human figure. The previous versions are a sequence of copy-and-paste versions for the figure of the human body. This yields a low-quality picture. My goal is to make a larger figure of this, and I was hoping to do this with Adobe Illustrator (version CS6).

I've been able to find one of the earlier versions (where the figure is in somewhat a decent quality). The only downpart is that there is a fold en the quality isn't that good. 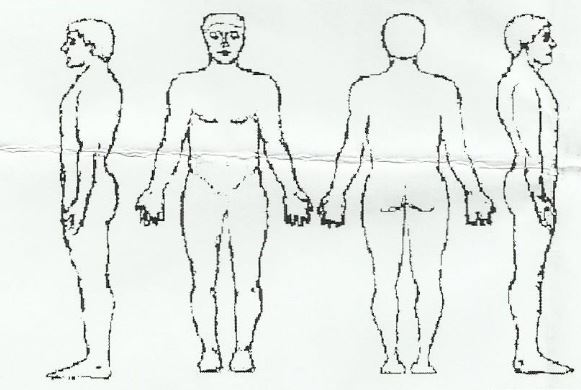 I was wondering of there were some tutorials or hints to make these kind of drawings ?

Just to be clear I'm not trying to make money of this, I'm a hobbiest who just wants to make sure that the people I'm with in the mountains get the care they need and as fast as possible.

I thought casualty meant you were dead. Wikipedia says not always, but you could just call it an injury card.

"I was wondering of there were some tutorials or hints to make these kind of drawings ?"

Find a kindergardner and give them a black pen. Tell them to draw Frankenstein, but naked. Then make a Xerox of it, and a Xerox of that Xerox. Repeat that several times and stick the last Xerox in the back seat of your car for a year where people sit on it. Then unfold it and scan it, and put a blue-green fill layer with 13% opacity over top of the scan in Photoshop. Save it in color at the lowest jpg quality setting it allows. There's my tutorial. :-)

If you want to draw as a hobby and are trying this kind of drawing then there's nothing Illustrator will do as magic to help you. You have to know what's wrong with the picture or you can't fix it. Basic mistakes you only need to read the first page of how to draw people to know... your eyes are centered in your head for instance, not floating up in the top 1/3rd.

If you want to communicate places of injury then it should be accurate. The hands shouldn't be mangled beforehand. Also if the hand is that small what good is marking it, it will just be "hand injured". You could have just said that. Maybe you need zoom levels so there is a close up of hands.

If this is a charity purpose then why not use a free drawing. You will just be frustrated if you try to draw a good human figure on a computer if you haven't done it with a pencil first. Don't believe the marketing, Illustrator just makes drawing harder. It's good for finishing a drawing but you should always sketch first.

Also maybe they should be taking pictures instead. That would be more accurate. Is it really easier to carry around an emergency paper card than some kind of emergency camera phone?

3
Computer drawing surfaces
8
Using Adobe Illustrator without “hand” drawing skills
5
What are the fundamentals of human figure drawing? How to improve in each of them?
5
Improving drawing of ovals and circles
1
Poser-like plugin to help with drawing human figure in Illustrator?
5
Ideal way to wrap a label around a bottle (3d extrude?)
1
Name of drawing with smooth solid high-contrast shapes
1
Drawing thin shapes without losing quality or being blurry
0
HTML email signature images
0
Constructing a basic shield from primary shapes