What kind of filter / treatment /lighting / style is done on this photo?

I really dig the porcelain / almost illustration/painting feel this has. It's got a nice juxtaposition of warmth with cool (warm pastelish pink over the grey). Would love to understand how this is done so i can implement it to my work as well. Any help / tips would be greatly appreciated! 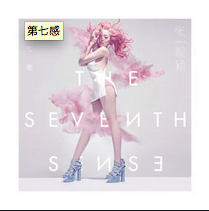 That's approximately 99 and 44/100% pure photography, which in the commercial world means "the Photoshop work was no more than a half-day". There's a single hard(ish) light raking down steeply in front (from, it seems, about three feet above the model's head, going by the fall-off—if it weren't for the fall-off, you could do this in open sunlight) and a great big flat front fill (a 7-foot octa or umbrella would almost be small here; a wall bounce is probably a better guess). And of course there was a wind machine/fan involved in the model photography. The dust/pigment tosses were photographed separately, probably at a quite different angle than you see them here, and composited in.

The colour shift is actually to the cool side, with yellows toned down and and blue bumped up a bit, and the greens taken down and magenta brought up. (Assuming, of course, that the model is not actually a Smurf.) You can accomplish that using either Curves or Levels and working with the individual colour channels. (Both will also allow you to lift and tone the shadows, which is where that slightly filmic look is coming from.) That effect seems to have been pretty much held back to nothing on the dress (such as it is), with maybe just a hint of the same treatment in the shadows; that means there's masking involved, and there's no single filter you can use to do the whole job.

But that's the easy, five-minute part of the job you do at the end; there would be a lot of basic retouching happening before you ever get there. Even if the model does have skin like that, there is an inviolable Law of the Universe that states that the shoot (which cannot be rescheduled, of course) will happen on the only day in over five years that she has developed a colony of zits or has broken out in hives just this moment because of something at the craft services table. (The idea that models don't eat is, um, not quite true.) It's far more likely that she doesn't have "porcelain skin", though it may seem that way at ordinary distances in real life. Captured through the unforgiving eye of a high-rez digital camera, not so much—you've got to fix that. Along with augmenting makeup, bringing out the eyes that will (of course) be in shadow, evening out tonalities and so on. That part applies to every "keeper". It's not part of the effect, but the effect won't work without it. And while plugins (like Imagenomic Portraiture, used on the low frequncy layer of a frequency separation) can be of some help, there's not a single one that can do the job by itself. It's all grunt work (and a lot more than you'd normally do for portraits and the like).

Not the answer you're looking for? Browse other questions tagged adobe-photoshop photography or ask your own question.