How can I identify what font was used in a Photoshop layer when the font is not installed on my computer?

So I created a layout for a website a while back and now am getting back to the project. The issue is I have a small logo designed and I am trying to recreate the logo at a much larger resolution.

The issue is I needed a spade (of hearts, spades, clubs, diamonds) for the logo and ended up using a text spade. It's a special character (♠) and as such a lot of fonts don't include it. So I am getting a little error in the list of layers:

I feel like in the past whenever this happened I would click on it to select the layer the font drop down would show "[Font Name]" instead of "Font Name" where the square brackets would represent that the font wasn't found — maybe I'm crazy but I feel like I've had that happen before. In this case the font is showing "Lucida Sans" which is a font that lacks the spade character.

When I try to edit the text I get this error:

… and when I click OK the spade disappears and shows that default Windows square for character not found.

Is there any way for me to figure out what font was originally used?

Target the text layer, then open the Character panel. The name of the font will appear in the "Font" field with square brackets around it, like this: [Times].

I'm not sure from reading your question whether or not you have other characters in the font you're trying to identify. If you do, you can render them to a TIFF and upload them to this site (TIFF is their preferred format):

And it will do its best to identify it. I have about an 80% success rate, depending upon whether or not I have the "telltale" characters - those that are most unique to the font.

Failing that, you can also post a shot of whatever you have to their forum and let the enthusiastic font-o-philes take a stab at it.

Failing THAT - you might try opening the PSD in a free hex editor (Google for one - there's zillions) and look for the font that way. I recommend saving a copy of the file with only the text layer and nothing else. The font name will be in Unicode most likely. Search for one of the nearby tags, like "FontType", and look backwards for the font name. In the pic below, the font is "Trade Gothic". 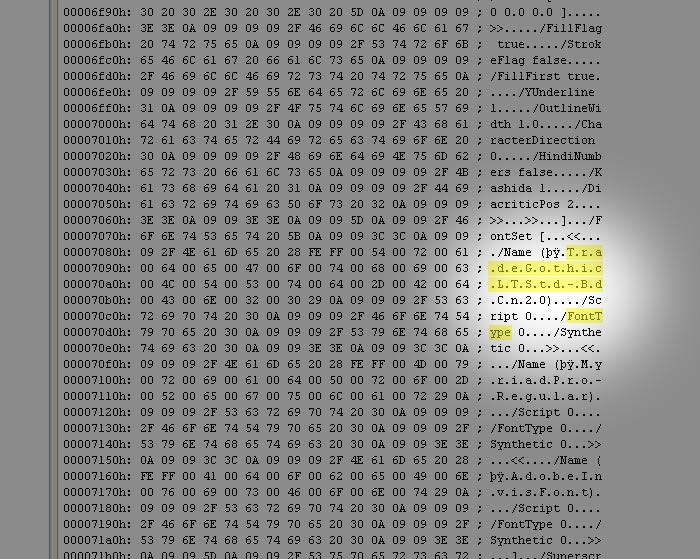 It might be that your CS4 Extended is not rendering your fonts properly, basically when Photoshop does not find the font used in text layer it shows the font name and ask for font substitution (see the attached screenshot, there is same issue I also don't have the font which is used in my Photoshop text layer but still it is showing the font name, so I can find this somewhere. But in your case it's completely different,try character panel window might be it will show you the broken text file name. 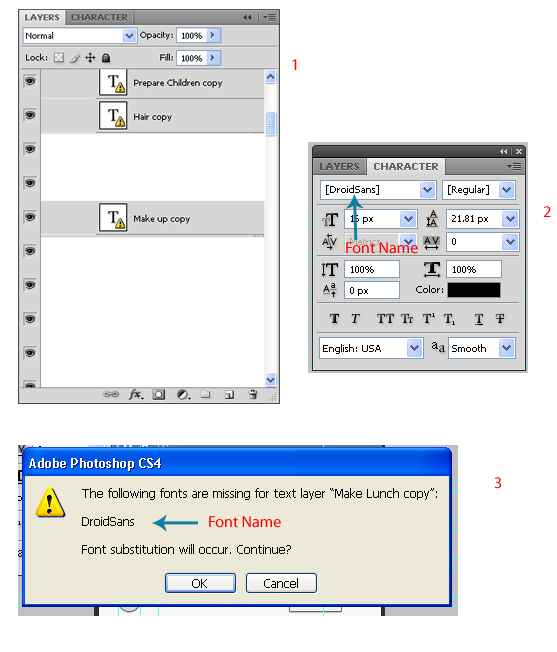 To get the fonts information form a PSD file you can use online tools if you can't or won't use Photoshop (or if you prefer using Gimp, that rasterizes PSD fonts).

For example you can try out this html5 PSD font online extractor "Get PSD Fonts".

It's a PSD font information extractor based on Melitingice Github project psd.js that does not require uploading files, working locally in your browser page

After downloading, Click the Character and Play Around Until you get the required layout.

It worked for me.. Along with the Font, some character settings may be present which can be detected only with that version of the software. For example, CS6-Faux Bold etc.. (it is present in the character window).

5
Can you help me with a font licensing question (AKA what is the licensing for my font)?
1
How to quickly find an installed font for use in graphics programs and documents?
0
Is there a way to group fonts within Illustrator
5
How to find which brush was used in a layer in Photoshop?
0
How to identify used style in Photoshop?
1
Photoshop - can not edit the gradient map layer
4
Photoshop: How can I change the layer type?
1
Photoshop CS5 Wrongly Shrinks Image Size on Place