I'm trying to make a little logo to put as a watermark on my pictures, and perhaps to put it in a website.

Since it's personal, I had the idea to use my initials (C and B) to form the shape of a camera, to make it personal and distinctive.

This is my first attempt (bear with me, I'm really new to design and do it just for fun, photograhy is also not my job): 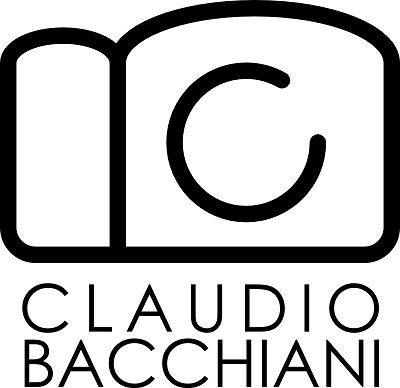 To me it feels kind of ok, but for the smooth corners that somehow seem to clash with the typeface beneath, of which I like the minimalism. The logo itself should be as minimal as possible in my mind.

Do you have any critiques (more than welcome!) or suggestions to make?

for the first word, claudio, consider a more bold font for just that word, and "eyeball" it to fit squarely over the last name instead of using guides. the kerning between the B and A, and the A and C in the last name might be tightened a bit. I like the logo itself. the squareness reminds me of books on a bookshelf, though. I would keep working on the "looks like a camera" idea. I thought of mountains and books before I saw the camera.

The icon isn't terribly ugly, it's simple. But maybe as an idea it doesn't have that much going for it?

If you tell people "it's a c inside of a B on its back and kind of looks like a camera" are they going to be impressed? Or is it better to start from scratch and make a better looking camera which isn't shaped like a B on its back? To compare with here is CB making a lens on a piece of clip art from Google Images (do not actually use clip art!): 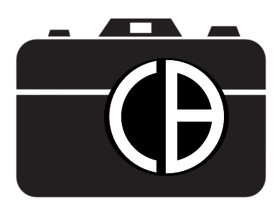 I am not saying that's good by any means. Just it shows there are ways you can convey "CB" and "camera" more clearly if that is what your idea is. Turning the B on its back and putting the C inside it gets to being obscure and you wind up not conveying either "CB" or "Camera".

Most important though I say is don't think a CB on a camera should be the end of the ideas because it was your first one. Pretend like a teacher has a red pen and keeps sending you back and saying "no, try harder". Is something more interesting about you than you have initials and you have a camera? How might you work it into a logo?

Two lines of the same type in the same size right next to each other with different spacing is just going to look bad. I don't know seen a rule of it like "don't stretch type" is a rule - but it should be one if it isn't.

So I'd either change the font for the two lines or not worry so much about them not being the same width and keep your spacing the same. Maybe just use the difference; if your camera is wider than tall you could run CLAUDIO vertical and BACCHIANI horizontal. It is the same as what I said about the icon though; don't just try one idea, try a lot.

Not the answer you're looking for? Browse other questions tagged logo critique photography or ask your own question.

9
Logo critique for Hooch & Co
4
Critique logo for community consultancy
5
C&C on a minimal logo that represents my name ("octopod")
1
Logo design: Use different logos for different media, or use the most simple one for all purposes?
3
Tips for designing a logo?
9
logo for a web developer - Logo critique
0
Critique: Logo For Digital Agency
8
Logo design: is this too simple or boring?
1
Critique request: Logo design for anime related products