How can I distinguish positive from negative values in a grayscale bubble grid?

I'm giving my sister a hand with a bunch of graphics for her thesis. She's dealing with 20 survey responses from a bunch of companies, and one of the natural things to do is look for correlation between answers.

Given that the survey was not the best ever (you gotta work with what you have, and she didn't make the survey), most correlations are strongly positive, and what little negative correlations are there are measly (strongest is -0.13).

My idea for putting this data in the thesis is to arrange the correlations in a grid and show bubbles in place of numbers: the bigger the stronger. The problem is that I'm having a hard time deciding how the negative correlations should appear.

My first thought is that I'd have solid black circles for positive correlations and black-bordered white circles for negative correlations. However, the negative dots are so small, the black border takes over the circle filling and the net result is all dots appear to be black.

Since this is going to be printed, using any color outside of grayscale is... not a good idea. My current solution for now is to show a grey "halo" around negative dots (see the two dots at the very center), perhaps giving them undue attention. It's far from perfect and it highlights how all dots aren't even perfectly circular: 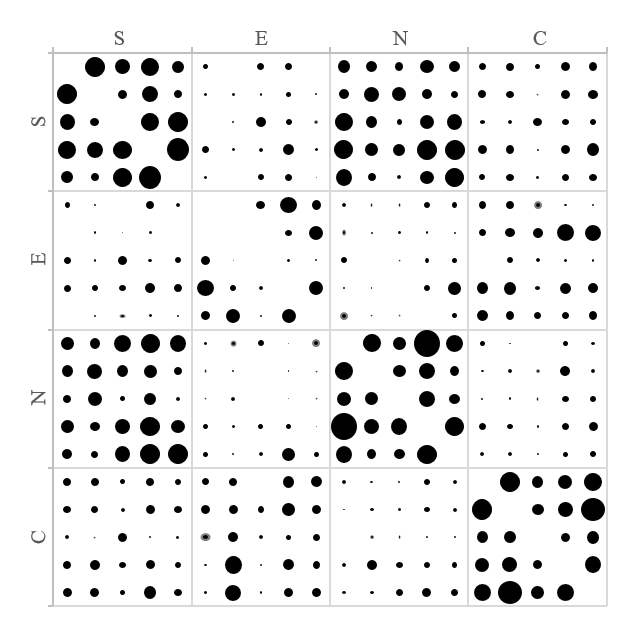 Another possibility is to make the negative dots grey altogether, but I don't know how those shades of gray are going to translate in print — and making test runs is probably too expensive of a BSc thesis.

Here's my take at it.

Your scale can obviously be whatever. I also wouldn't get too caught up if you use grayscale. As long as it's not below 50%. You could even put a crosshatch or 45º angle lines as a fill. You could also switch to square or a diamond for negative values. I believe there are many solutions here.

1
How can I apply color to a grayscale image?
5
How do I create color swatch for Photoshop from a list of RGB values?
4
Can I export from pdf through Photoshop and back to pdf and keep the color values the same?
2
Do websites need three colors?
1
How can one accurately reproduce color from an already printed (hard copy) color block?
6
How can I increase the contrast in a color image converted to grayscale?
1
Is the low statistical correlation between the HSV channels, conditional upon the color name, a well known property of the color space?
0
How can I easily convert a plaintext list of HEX values to an adobe ACO/ASE color palette file?