What is the line resolution in the pond in A. Dürer's St Eustace engraving?

Concerning hand engraving, I was reading that:

Modern professional engravers can engrave with a resolution of up to 40 lines per mm in high grade work creating game scenes and scrollwork.

So I was looking at this detail from Albrecht Dürer's St Eustace (1501): 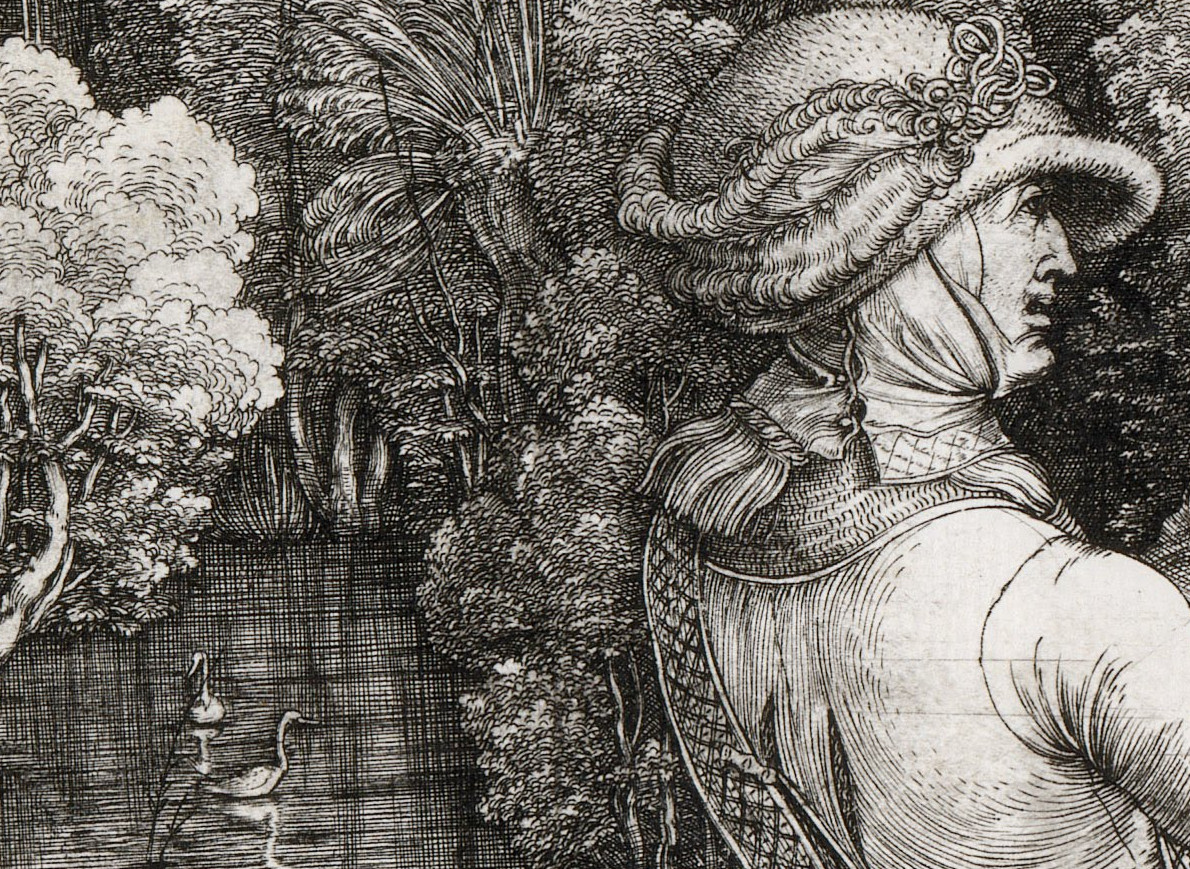 How can I figure out the resolution of the lines in an engraving on traditional medium?1

1. Or does the answer lie in figuring out what is the smallest line which can be "drawn" with a technique/medium (engraving, woodcut/linocut, brush, ink, pen)? Or need I study every tool/material per se to figure that out i.e. for instance another tool than a burin can be used for engraving finer details from what I understand etc. Is the size of a line a factor of the the tool used or the medium or both? Comparing line properties in different techniques is what motivates this Q.

Albrecht Durer was a masterful engraver, but the only way he was going to achieve 40 lines per millimetre was by accident. He was working at a time before (just before, but before nonetheless) the Venetian glassmakers' trade secret was leaked and they lost monopoly control of their new cristallo (which was less than 50 years old when St. Eustace was created). That is to say that the lenses of the time wouldn't have been adequate for a loupe one might use to deliberately work at or near the mechanical limits of the plate material. (If Durer had only had the sense to be born 100 years later, the equipment he'd have needed would have been almost commonplace.)

That said, it is not difficult to estimate the frequency of the engraved lines in the work. St. Eustace is approximately 25cm by 35cm, if you count only the image area. (The entire plate is 262 by 361 millimetres.) That's 250mm (horizontal) by 350mm (vertical) to a good enough approximation for the purpose. The detail you posted, then, represents (again, to a "good enough" approximation) about 60mm horizontal and 44mm vertical. And at 1190px by 869px, you can call that 20 pixels (of JPEG) per mm (of physical print), more or less. That tells you immediately, without zooming in and counting pixels, that if you can see line-space-line-space, the absolute maximum that you could discern would be 10 lines per millimetre. Zooming way in, you can see that the most densely-packed areas that are deliberate (that is, they aren't accidents of not-quite-parallel lines, the random mess that is a dead black, or the meeting of adjacent patches of shading) take about 4 pixels to cycle. That's 5 lines per millimetre linearly, or if you're looking at the hatching frequency, 25 (5 vertical and 5 horizontal).

And if that sounds suddenly less impressive, you try it — without lenses or pantographs, on period copper using a period iron or steel (if one could call it that) burin. Millimetres are tiny.

As an engraving (and etching) is analog, there is no 'resolution' to speak of--at least not in the way we think of resolution today (amount of data in an image).

In the context of 'how much detail can they fit into the etching' that would have depended on a few things, namely: the quality of the paper, the material being engraved, and the tools and skills of the artist (and printer, for that matter).

If the question is to attempt to calculate what the resolution required today would need to be to replicate the detail of the original, I imagine the way to go about that would be to get the original, and then scan it in at the highest possible resolution one can. From there, reduce the resolution until the fine details are no longer discernible. Of course, there may be cases where the original is simply a higher resolution that the scanner one has at their disposal.

3
What is the name of this mosaic technique?
1
What kind of markers were used to make this?
9
What are some good resources for learning calligraphy?
6
What should graphic designers consider when designing tattoos?
3
How to achieve a metal engraving effect in Adobe Illustrator CC?
3
What is the biomechanical motion to draw a straight vertical line?
1
What techniques does Jesse Kanda (+++) use?
2
What techniques or tools are used to create this kind of line art?