a young designer working for us made this speech bubble as part of a larger item ...

Consider the join or miter of the "pointy part".. 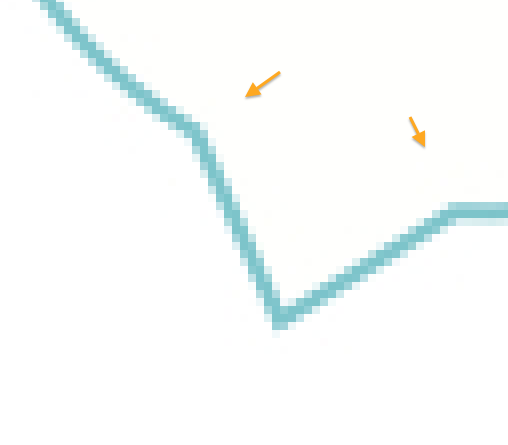 I'm thinking it might look poorly-done: it should be a tiny bit smoother (I guess using a spline for that join).

But .......... then I was thinking, perhaps that rather "crisp" look for a speech-bubble-pointy-thing may be best?

As a related (3) question: I was trying to find the perfect article online regarding "everything a beginning designer should know about connecting lines properly" (by the way, I don't mean the mechanics of using those functions in Illustrator, I mean, the artistic and deisgn questions therein raised). Perhaps someone knows such a great article, I couldn't find one? (It would probably be titled something like "Don't just shove lines together!" :) )

{Note - additionally i feel the pointy-part is rather messy, so, it's not coming exactly centred off the tangent at the short axis of the ellipse, etc, but setting that aside I'm just interested in the question "what's the perfect join for the pointy part of an icon-like speech bubble?"}

Having drawn thousands of speech balloons over the years, I have my own opinions on the subject, but as suggested by Vincent, there is no wrong way to make the "tail" on a word balloon.

The stylistic choice made by your artist is just fine and reads as "word balloon", though traditionally, the angle at which the tail meets the balloon is a bit more acute. You can see myriad examples here.

As to question (2), you just can't go wrong with Charles Schulz or Bill Watterson though their balloon tails have a flair of their own, further suggesting that it really is a matter of style. 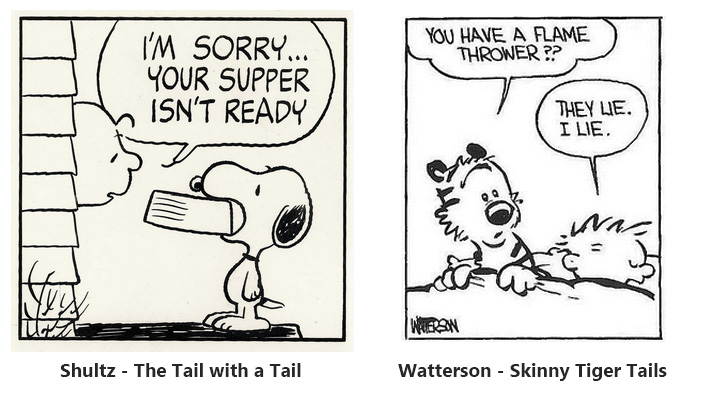 (3) Though there aren't any rules set in stone, angles can be used to affect perception in the right context. For example, acute angles can be perceived as threatening to the viewer. People have a built in aversion to highly acute angles like that of a needle point. This is why the biohazzard symbol so effectively conveys "danger". 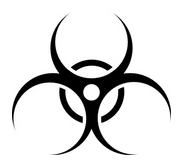 Similarly, other angles resonate with us as having perceived value...90 degree angles feel strong and stable because we intrinsically understand how gravity affects objects. 120 degree angles are notable in that they have historically (and in videogames) been used to effectively depict 3D space on a 2D surface... https://en.wikipedia.org/wiki/Isometric_projection

As far as design goes, you will find many rules that can be bent or broken, so in some cases your best choice is to go with your heart. This is one of them :)

If you are interested in more theory on comics and the use of Speech Balloons, Scott McCloud wrote the bible on the subject. called Understanding Comics, it's a fascinating read for anyone who draws, or just plain loves reading, comics. http://scottmccloud.com/2-print/1-uc/

Hope some of this helps!

Not the answer you're looking for? Browse other questions tagged vector typography icon or ask your own question.

7
Is there a recognized name for the 'grippy' part of an interface that indicates movability?
0
How to join multiple paths of the same object?
9
What typographic features are part of the font itself vs part of the software?
1
How to create text stroke outline with offset for an enclosed bubble effect?
1
How to place a perfect curve to join two circles together?
2
What is this type of (speech bubble text) style called?
1
making an action for join and smooth anchors in illustrator
1
Join two circles to make perfect rounded rectangle