Vectors: How do you deal with background 'spill' on overlapping edges?

I can cope with this happening within Illustrator, but why does it have to happen in any exported vector formats as well? For instance, when rendering logos in .EPS format, how do you deal with this annoying phenomenon? Is there any way to circumvent it without having to manually offset (trap?) the background object's edge so as not to get this undesired effect?

Choosing "Save for Web" in Illustratos seems to always render perfect results. But somehow (maybe someone can explain the technical reason) vector formats won't regard the behind-object to be entirely covered by the frontmost object (i.e. disregard the lower object's edge), but instead insist on "spilling" in its color onto the edge of the frontmost object.

To wrap it up:

I'm mainly looking for advice/approaches when dealing with this, especially within context of logotype crafting, where deliverables may often be requested in .EPS format, apart from normal bitmap formats.

EDIT: one thing I find interesting is that when doing "Save for Web" and switching between Art Optimized and Type Optimized, the latter will also exhibit this undesired phenomenon. 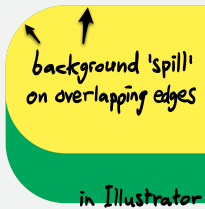 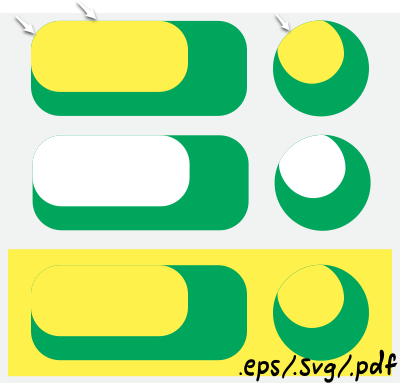 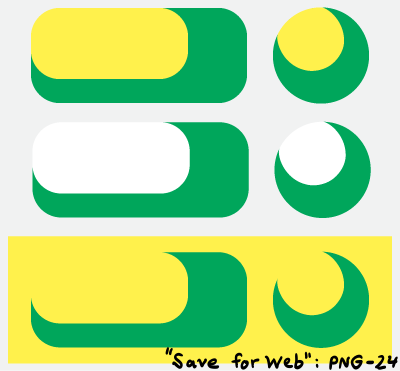 Why is "Save for Web" better at this? Difficult to say, but it might require relatively slow, complex calculations to give the best result, which would be unacceptably slow if applied in real-time while you're editing.

I would imagine there are academic papers on this if you want to look into it further.

When supplying vector logos, it would definitely be best practice to eliminate the possibility of the issue occurring.

I did a few tests duplicating your scenario in AI CS5.1, and the fringing effect was (barely) visible on my big honking Cinema display when zoomed out, but not visible when zoomed in. My secondary display has a coarser pitch than the Big Guy, and it was more visible there. This tends to confirm what I suspected was the problem, and is more or less what e100 pointed out: this is an artifact of antialiasing by the application at the relatively coarse resolution of your monitor. It's a bit like the fine hairlines that sometimes show up in PDFs and cause clients to make frantic phone calls to the designer.

For obvious reasons, the effect is visible primarily on curved and diagonal edges, doesn't exist on vertical and horizontal ones that fall on pixel boundaries and is somewhat there when an edge falls between pixels, forcing anti-aliasing.

You can mitigate the problem by checking "Align New Objects to Pixel Grid" in the "Advanced" section of the New File dialog, but I found the effect disappeared completely when I turned off "Anti-Alias Artwork" in the Preferences > General section. You end up with "jaggies," but no false color artifacts.

It doesn't show in SfW because it's not really there. It's also not there in PDF if you zoom in. PDF "knows" there's a shape behind, and tries to anti-alias it at the resolution of the screen, so it shows up at small image sizes and disappears as you zoom. It also won't show on Export to jpeg if you change "Text Optimized (Hinting)" in the export dialog to "Art Optimized."

SVG is at the mercy of the browser's rendering engine. None of them (IE9, Chrome, FF, Opera and Safari) are up to the task, based on my tests. EPS, similarly, renders according to the application but will print or export to raster formats without problem.

I would suggest trying a couple of things:

Using Illustrator is as much about creating the illusion of shape as it is creating the shape itself, and that requires a bit of strategy to get to work right.

Asking why Illustrator does this is unanswerable.

Not the answer you're looking for? Browse other questions tagged adobe-illustrator logo vector workflow or ask your own question.

2
Why does the screen fill with the foreground color of a deleted shape in Photoshop?
1
Illustrator eps for tshirt printing
7
How to deal with mistakes
0
Importing logo from Photoshop to Illustrator
1
Why does my embedded EPS look pixelated on my Photoshop PDF?
6
Pros and cons to .AI vs. .EPS file formats in 2017?
1
A tool on line to convert an image to vectorial or using Adobe Illustrator: best practice