What is a good upgrade for Wacom Bamboo Fun

At the moment, my girlfriend is using her old Wacom Bamboo Fun.

Because x-mas is near I am thinking about buying her a new and/or better device! The price should be between 200€ and 300€.

While researching on Google I found the 2 following devices:

What do you guys think?

The "Bamboo Fun" was Wacom's bare-bones, entry-level, dirt-cheap, option. It was the least robust of any tablet. Wacom appears to have discontinued that model or anything like it.

The CTH-680S series are Bamboo tablets. Just not the "Fun" model. They are more in line with the standard "Bamboo" and the "Bamboo Create" tablets. They are slightly better than the Bamboo Fun was, but not a great deal better. They merely renamed the "Bamboo" line to "Intuos" and the CTH-680S series appears to be specifically non-American. Not sure why they use the number/letter model rather than the "Intuos" name.

These are still entry level tablets - and, in fact, they are the Bamboo tablets. You will gain a bit of pressure sensitivity and features with these tablets, but you won't gain a great deal. Technically, yes, these would be upgrades from the "Bamboo Fun" but not drastic upgrades.

The next logical step up from these is the Intuos Pro.

Other than the dramatic price difference, the Intuos Pro offers double the pressure sensitivity, higher LPI resolution, side buttons on the stylus, expression buttons on the tablet, ergonomics (tilt, rotation, etc) and many more features.

Then the next step above the Intuos Pro would be a Cintiq. The Cintiq is basically an intuos Pro built into a monitor. You connect it to a system just like you would connect a monitor, then draw on the screen with the stylus.

My opinion is that all three of those tablets you're looking at are all entry level tablets so I wouldn't personally look into getting another entry. If you use it regularly like some do by replacing the mouse with your tablet and you love to draw I would look into saving more and getting a 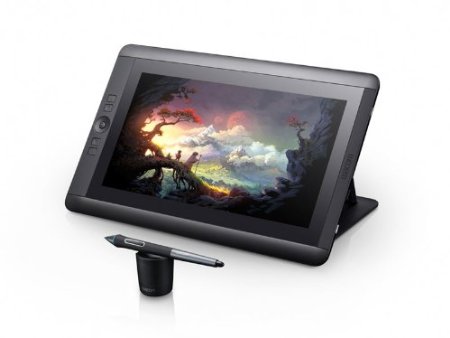 but since your question requested within a price I do believe that you would enjoy the Wacom Intuos Pro which I think is your Wacom CTH-680S-DEIT. This question is somewhat subjective though and answers would be based on ones preference, but if all else fails I would simply just ask your girlfriend what she wants and if she wants to advance from an entry level tablet. I say that because I occasionally use my tablet when I have time to just relax and draw but that doesn't mean I want to upgrade from my Intuos5.

Not the answer you're looking for? Browse other questions tagged hardware-recommendation drawing-tablet or ask your own question.

4
Looking for a good and durable tablet
7
Cheap Cintiq alternatives - tablet PCs with digitizers?
0
What should I upgrade so Photoshop will run faster?
0
What size Wacom Intuos tablet should I get for drawing?
0
Is a Wacom tablet a good product for a beginner/hobbyist?
1
Wacom tablet for writing equations and explaining in a video format