Remove parts of a picture in photoshop

I have this image below:

and I am trying to figure out a way to remove all of the colored dots from the image. Are there any techniques that anyone would suggest to be able to remove this from the image so I just have a regular striped base to this image? I am using photoshop 7

You're not really trying to remove dots, you're trying to remove a bunch of differently colored line segments. Each "dot" is composed of at least three, sometimes as many as seven individual elements across alternating light and darker grey stripes.

The easiest way to do this is not to work on the individual color areas, but to completely recreate the light and dark stripes on top of the existing image. You're going to get a much better-looking result if you fill an entire stripe than if you try to do it in small patches. My approach, frankly, would be to keep the cup edge and the frosting, and redo the cup from scratch. It's a lot faster than the alternatives.

IF you want to work with the original, though, here's how I would do it. It is a fairly slow and arduous undertaking, especially with the tools available in PS7. I don't know if what you're showing is the full resolution you have to work with. The higher the actual pixel count, the easier this will be to pull off. Conversely, at a very low resolution it will be extremely hard.

Here's the approach I would use:

Make a second window for the image, using Window > New Window. Tile the two windows side by side and zoom way in on one of them. This is the window you'll work in. The other is your reference so you can see the effect at normal resolution, so it should be at 100%, or at the size you expect to use the image. While you work in the zoomed-in window, watch the image change in the normal window to get a proper perspective on how you're doing.

Note 1: On the very fine lines on the left, you may find it fastest to simply go in with the pencil tool or the line tool if they are genuinely only a pixel or two wide.

Note 2: In the places where there is only a tiny bit of color within the darker grey, you could simply clone stamp it out, but do make a selection to restrict the stamp to just the area you need.

Now look at the overall composite. You will probably see some color showing through in places. Add another layer and use the Pencil tool or a one or two pixel brush at a high zoom to add light or dark pixels where needed to completely hide the color.

When you're done, save the image, then flatten and save with a different file name.

Photoshop 7? Hmm, I have no idea was tools you do or don't have, so I'd suggest a rough do-it-yourself technique using the magic wand and paint brush.

Basically, select a "stripe" of color and then paint over it with a soft brush with the color of the rest of that stripe.

In the screen shot you can see I split the painting into stop steps (one for the top half, the second for the bottom half) that's because the stripe is a subtle gradient and it helps it blend. So make sure you use a soft brush when you paint.

I did one dot for you here:

You can see the edges are a bit rough, but it's just a little more work to clean up.

I agree that it would be easier to draw over the image in Illustrator. However, since you specified Photoshop 7, I do have a method for you that will work in an earlier version of Photoshop (though I don't remember if it was added before or after PS7.

Over and over and over. Increase the size of the image until you see separate pixels. Select one color area each time, then lower the saturation and increase the lightness until you get a good match with surrounding color. Adjust the fuzziness so that you only select the pixels in one color range, without affecting the brown icing, that's the trick! I also copy/pasted 6 to 9 pixels at a time (remembering to merge layers down often).

Good luck and continue with the image I started for you if you like. 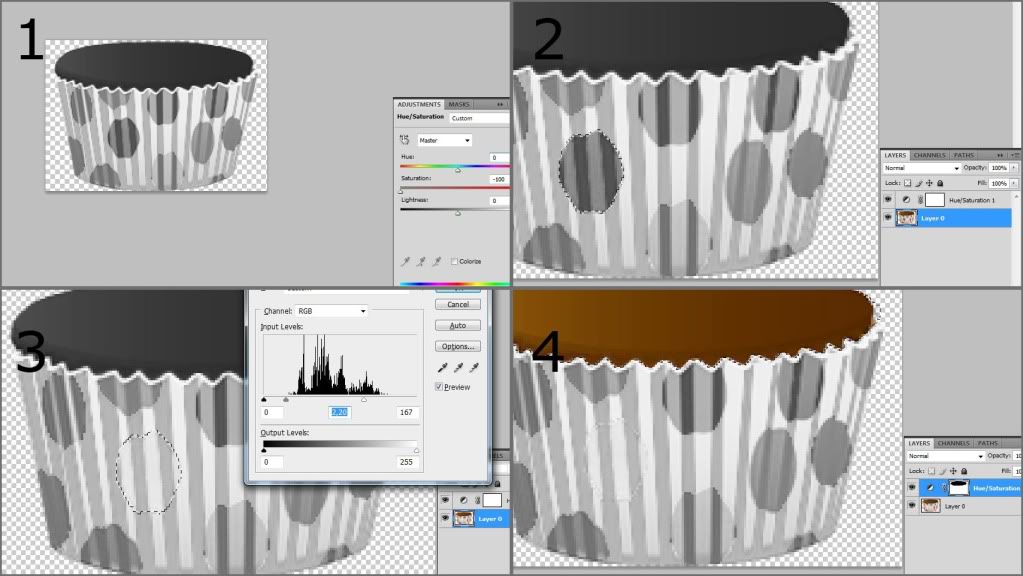 It will take max 20 minutes to draw it over in illustrator (or any other program, inkscape for example) — improve your skills! So afterwards you can have a real vector.

You can use the Select>Color Range tool.. and select the dot color and then replace with an appropriate color. This will give you a better selection than the Magic Wand or the quick selection tool.

1
Color Blending in Photoshop
0
How can i remove white streaks from an image in photoshop?
10
Alpha Transparency Remove Background Photoshop
0
Extract still picture from moving background
0
What is the best way to increase a selected area over another area in a image using photoshop
0
How to remove background from Complex in Photoshop
2
Remove Unwanted Color From 'Transparent' Background in Adobe Photoshop CC 2015
0
remove structured, 'honey-comb'-like noise from histology picture
0
Remove an element on an image and recreate a plain color background, without Content Aware Removal tool